DHCPv6 guard feature blocks DHCP reply and advertisement messages that originate from unauthorized DHCP servers and relay agents that forward DHCP packets from servers to clients. Client messages or messages sent by relay agents from clients to servers are not blocked. The filtering decision is determined by the device role assigned to the receiving switch port, trunk, or VLAN. This functionality helps to prevent traffic redirection or denial of service (DoS). 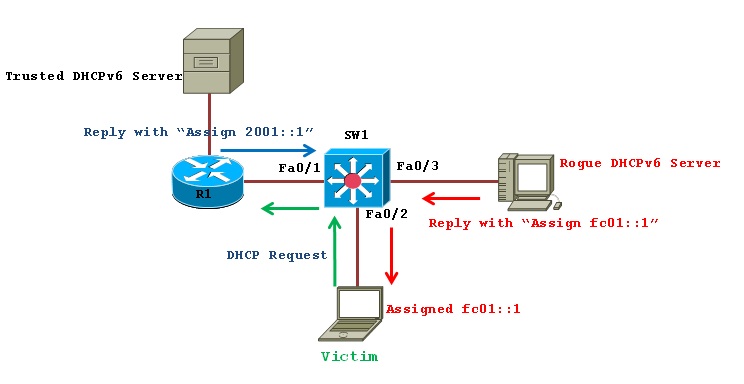 We’ve got our multilayer switch in the center and somewhere off to the side of router R1,we’ve got a DHCPv6 server which is our legitimate device.  And in our access domain on the down we have our victim, who is a person coming into work on a normal morning, turning on his Laptop and requesting a DHCPv6 address with a solicit message.  Unfortunately for him, a neighbor of his is the rogue man sitting next to him in the cubicle, can see his DHCP solicit message and can actually reply, pretending that he is the DHCPv6 server and assign credentials and…such as the DNS address to be used etc. and which he can use then to redirect traffic to himself.  So, unprotected, this would be a very dangerous position. So for people to protect themselves in this sort of network layer by simply turning on IPv6 Snooping.  By turning on IPv6 Snooping, you automatically drop the switch into “Guard Mode” which will turn on DHCPv6 Guard as well as RA Guard; so none of the redirect advertisements or any DHCPv6 server messages will get through.

There are two mode:

1) Client: Sets the role of the device to client.

2) Server: Sets the role of the device to server.

Since the default mode of the switch is to “guard”, by default all ports configured with dhcpv6 guard will be in client mode. Thus all ports will be dropping any dhcpv6 server messages by default.

Additional security can be achieved by assigning an access list to only permit dhcpv6 server messages from a specific source address. Assigning a prefix-list to allow address allocation only from a known prefix (i.e. the server has been compromised).

For the Host facing ports you don’t need to do this, but if you want to explicitly configure this, that’s how you do it.

You can also provide some extra functionality over access lists; you could block server messages for particular addresses using an access list and you could also block some advertisements from the DHCPv6 server blocking certain prefixes using a prefix list as shown below:

15 Helpful
Share
Latest Contents
Nexus 9000v and vSphere 7
Created by glmorris47 on 05-20-2022 01:16 PM
0
0
0
0
Has anyone got Cisco Nexus 9000v to run on Vsphere 7.x? I can't seem to get Nexus 9000v 9.3 to run on ESXi 7.02.  The image appears to boot but stops with 'Boot Time <date time> as the last line displayed on the console.  I have gotte... view more
Point-to-Point links and adding static routes
Created by MikeNY85 on 05-20-2022 12:15 PM
1
0
1
0
Which two commands must be configured on the New York router so that it reaches the Lo1 interface of the Atlanta router via Washington when the link between New York and Atlanta goes down? I am a bit confused which static route i must use to solve that. I... view more
Redundant connection between 4321 ISR and switch
Created by Translator on 05-20-2022 11:56 AM
1
0
1
0
Please help - is there a way to establish a fault tolerant connection between the 4321 ISR router and the 2960 or IE2000 switch?Writing bachelor's work, doing a simulation at Cisco Packet Tracer. The HSRP activation command is not accepted by the sim... view more
SFP's needed for new switches
Created by caleb1 on 05-20-2022 11:36 AM
1
0
1
0
Hello folks, I am looking to purchase the following switch as Layer 3 C9300X-24Y-A and following switch as Layer 2 C9200L-48P-4X-E. The current old switches 3850 & 3650 that are being replaced have the following SFP for the most part "SFP-10... view more
VPN 0 default routes with static and DHCP
Created by tautog on 05-20-2022 10:55 AM
0
0
0
0
Somehow I am not understanding the scant documentation on setting default routes for multiple circuits in VPN 0. It works for me with more than one circuit if they all are static IPs with static next hops. It works for a single circuit with DHCP. However,... view more
Ask a Question
Create
+ Discussion
+ Blog
+ Document
+ Video
+ Project Story
Find more resources
Discussions
Blogs
Events
Videos
Project Gallery
New Community Member Guide
Related support document topics