On traditional switches whenever we have a trunk interface we use the VLAN tag to demultiplex the VLANs. The switch needs to determine which MAC Address table to look in for a forwarding decision. To do this we require the switch to do two things:

1.) Have the VLAN configured globally

2.) Perform MAC learning in this VLAN

The challenge with this is that it requires us to use finite resources, perhaps without reason. Since the 802.1q VLAN tag is only 12-bits wide we can only configure a maximum of 4096 VLANs. Furthermore switches have a finite amount of CAM space for MAC Learning limiting the number of hosts we can support.

In modern provider and cloud environments there is a need to scale beyond these limitations.

Ethernet Virtual Circuits (EVCs) allow us to leverage existing 802.1q VLAN tags in a brand new way. Traditionally the VLAN tag defined both classification (which VLAN) and forwarding (which CAM table to do a MAC lookup in). Now, with EVCs we can separate these concepts; the VLAN tag is used for classification and the Service Instance defines the forwarding action. For example we could allocate VLAN 10 to different customers on every switchport and forward each customer's traffic across different MPLS Pseudowires, but never actually configure VLAN 10 globally!

How It Works (Ingress)

As an 802.1q tagged frame enters an interface that has been configured with an EVC we will determine which EVC it is classified into based on the tags on the frame. Within the EVC we define what action we wish to do with that frame. Let's take a look at a sample EVC configuration.

Now, let's break down each piece of this configuration.

These lines tell the interface that we need to process 802.1q tags as a trunk interface should, however we will not actually pass any VLANs through this interface. VLAN tags received on Service Instance interfaces have no direct relationship to VLANs configured on the switch. Furthermore Service Instance interfaces do not do any MAC learning (except through a bridge-domain VLAN interface, which is discussed later). Because of this we do not want to allow any globally configured VLANs across this trunk interface. We only need to enable VLAN tag processing and let the Service Instance figure out what to do with the frame.

This defines the service instance. The number is arbitrary; it has nothing to do with the VLANs that will be processed by this particular Service Instance The "ethernet" keyword is always used.

Since the incoming tag no longer has any inherent meaning beyond this specific interface we need a way to discard that tag before forwarding the frame on. The rewrite ingress command does just that. In this case we will remove exactly 1 tag, This command is optional and there are a number options that can be done beyond simply removing the tag including, VLAN translation and imposing additional tags. We will discuss some of these options and the "symmetric" keyword a little later.

Finally, what is our forwarding action with that frame?

This tells us that the frame should be sent across the L2VPN MPLS cloud. Since before this we configure the rewrite ingress tag pop 1 symmetric command we will send a frame with no VLAN Tags across the MPLS pseudowire. There are a multiple possible forwarding actions including routing and local switching (connect)

How It Works (Egress)

As a frame is received it will be classified to go out the Service Instance interface based on how it arrived on this switch in the first place. For example if the frame is received across MPLS pseudowire 33, we automatically know it is part of service instance 6

Continuing to work bottom up in the configuration we come to the symmetric part of rewrite ingress tag pop 1 symmetric. Since we popped 1 tag ingress, to be symmetric we need to push 1 tag egress. The symmetric keyword will always be used with the rewrite command.

We determine which tag to impose based on the encapsulation dot1q 10 command. As the frame egresses the interface impose VLAN Tag of 10. Keep in mind that the access layer device that is sending us tagged frames is most likely a traditional Layer-2 switch and needs the tag it sends to be the same tag it receives for proper classification. 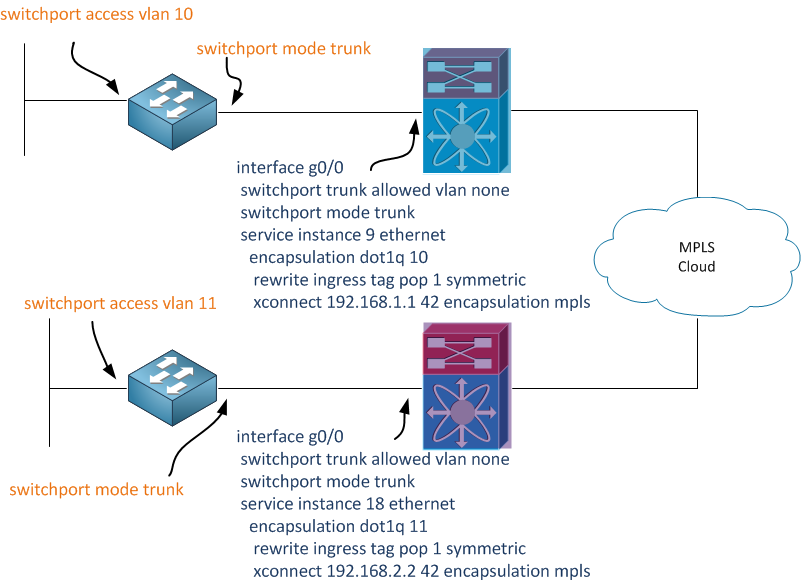 So a few things to note here:

A client connect to the access port will send an untagged frame. This frame will be have VLAN tag 10 added to it by the access layer switch and sent to the PE with the service instance configuration.

The Blue PE will see VLAN tag 10 and place it into service instance 9. Since we have configured the 'rewrite ingress pop 1 symmetric' command, we will pop the first tag before applying an MPLS label and forwarding into the MPLS cloud. 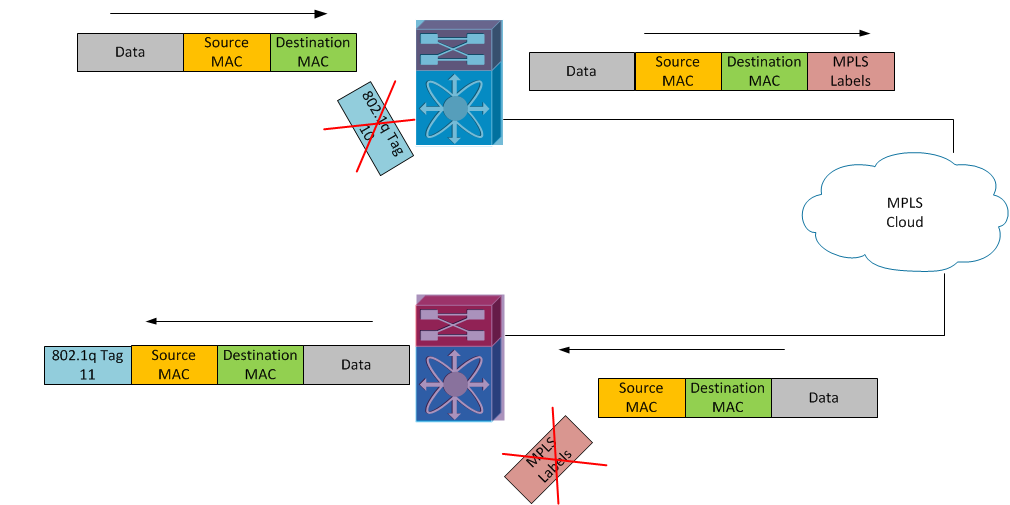 As the labeled packet leaves the MPLS cloud we place the untagged frame into PE Red's service instance 18, based on the "xconnect" command. From there since the "rewrite ingress pop 1 symmetric" command is configured and this is an egress frame we know we need to impose one. The tag imposed is based on the "encapsulation dot1q" configuration, so in this case, VLAN tag 11 is imposed on the frame before sending back out to the access layer switch.

One of the things that make EVCs so powerful is their flexible matching criteria. EVCs allow us to classify inbound frames in a highly flexible manner based on 1 or more VLAN tags or CoS values. Here are some examples

The options here are not exhaustive but just some examples. The other thing to remember about tag matching is that we follow a longest match criteria.

Along with a number of flexible matching options we have numerous tag rewrite options.

An EVC can be attached to an MPLS xconnect and we can send the traffic across an MPLS cloud.

For more flexibility EVCs introduce the concept of the Bridge Domain. A Bridge Domain is what is traditionally thought of as a Layer 3 SVI. Unlike the VLAN tags that are being processed by the configured EVCs bridge-domains do require the VLAN to be configured globally on the device and use platform wide resources.

Here is an example of an interface configured with a bridge-domain:

The packet, without VLAN tags, will be passed to the VLAN44 interface for normal routing to occur.

This configuration will allow either the service instances to speak between one another or out to other routed subnets. More broadly, Vlan 44 will bridge together the two service instances and forward frames based on MAC learning. As a frame enters Service Instance 1, the VLAN tag will be removed, the frame will be passed to Vlan 44 where the destination MAC will be looked up. If the destination is out the other Service Instance, the frame will be placed on Service Instance 2 and a new VLAN tag will be added.

Bridge domains also allow for the configuration of a "split-horizon" (bridge-domain 44 split-horizon) to prevent inter-EVC communication, only allowing for routing outside of the bridge domain.

Finally, we can take multiple EVCs, and send all of them over an MPLS Pseudowire

Since the way EVCs work is so different from traditional switching not all switching platforms are capable of doing the EVC frame manipulation independently of the forwarding action. Newer platforms like the me3600x or me3800x were designed from the ground up with this kind of capability in mind. The 7600 platform requires newer Ethernet Services (ES) modules to do the additional work that the Supervisor and DFC forwarding engines are unable to do. This guide is also not an exhaustive list of supported platforms or configurations, but merely to demonstrate some deployment options and how traffic forwarding operates in these new EVC environments.

this is great Document, as you know that we can create 8000 service instance on one router interface, so do you have idea that what is the benefit of this if we have only can create 4094 802.1q encapsulation. 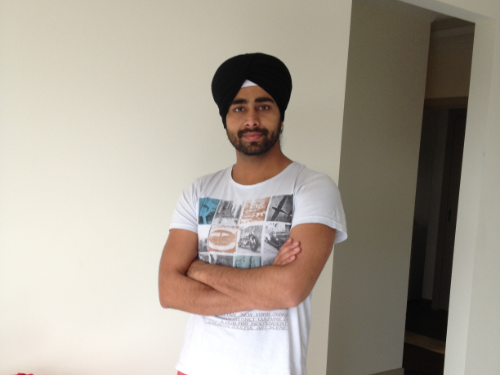 Brilliant explanation, saved me hours of trawling through Cisco docs, Cisco should create easy to digest articles like this for all of their features to compliment their standard offering.

Wonderfully precise explanation. By the beginning of the second paragraph I already have a good idea of what is being explained. Thumbs Up 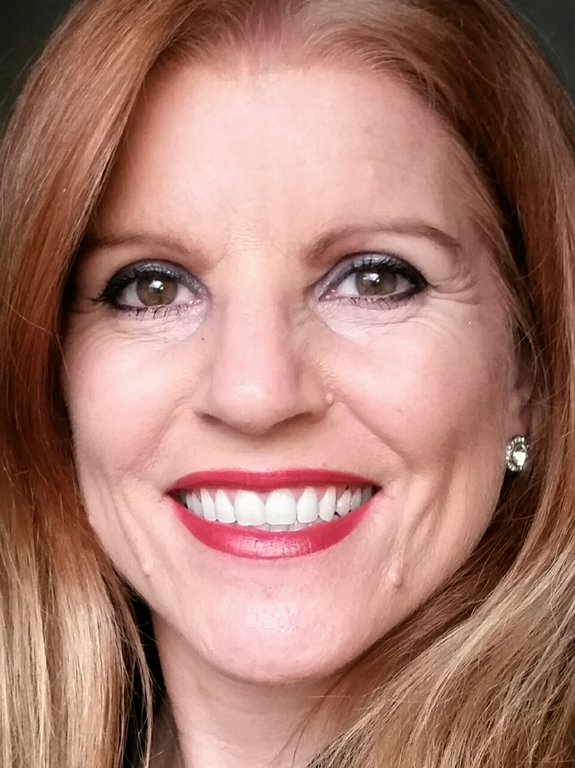 Question:  How does the device determine which service instance to send traffic to when it arrives from the mpls cloud?  SVI44 recieves the traffic, decapsulates the mpls header, underneith is a simple layer 2 frame without a VLAN tag.  How is the frame forwarded?  Or do R-A and R-B appear to virtually be on the same LAN, so an ARP from the remote R-A get treated [for a lack of better terms] like NBMA on R-B and unicast out service instance 1 and service instance 2?

R-A is a remote device

R-B has the config above

Very interesting article; but this scheme does not work with the configuration that I realized; Can someone help me please

you can not use f0/0 for routing, it is only for management

Latest Contents
NAT overload not working as expected
Created by ac5nwdude on 10-29-2020 04:32 AM
0
0
0
0
I have a CISCO1921 with IOS 15.3(3)M5 and its behaviour differs from what I would expect from the config.Overview:10.4.10.0/23 local network for clients (no overload, web access via proxy, see below)10.4.12.0/24 local network for guests10.4.14.0/24 local ... view more
how to indenting cause of slow network performances that var...
Created by nkosiedread10963 on 10-29-2020 04:23 AM
1
5
1
5
Greetings, I have 3 branches running 4500-x collapsed core and 2960 access switches with 1GB access ports and 20GB ether channel uplinks. The network performances is significantly slower in the morning with speeds ranges of 0Mbps to max of 7Mbps... view more
SDN Questions
Created by Sascha2020 on 10-29-2020 04:06 AM
0
0
0
0
Hey guys,  currently i'm struggling to find answers to the following questions, maybe you could help me? 1. Is it possible to implement a SDN-Solution which works with the protocols OSPF, IS-IS or EIGRP? 2. Currently we got a 3-Tier-Ar... view more
3750x HSRP issue
Created by 7layerorg on 10-29-2020 03:58 AM
0
0
0
0
Dear all, I'm having a vired issue with my HSRP config, because the nodes cannot see each other properly.When I noticed the issue first I thought the trouble lies at layer2 with the SG300 switch where the two 3750x connected to.But we have moved the ... view more
Routes learned from EIGRP not showing in BGP routing table
Created by luqman_khalid on 10-29-2020 03:17 AM
2
0
2
0
This is basic MPLS-VPN LaB i am practicing on GNS3. topology Diagram is attached.I am unable to ping from PE(R-2) to PE(R-4). routes are showing in neighbor table of BGP but not in routing table.Please help. I am attaching config files of PE(R2) , PE (R4)... view more
CreatePlease login to create content
Discussion
Blog
Document
Project
Video
Related Content
Discussions
Blogs
Events
Videos
Projects
Content for Community-Ad