Welcome to the new Cisco Community. LEARN MORE about the updates and what is coming.
Turn on suggestions
Auto-suggest helps you quickly narrow down your search results by suggesting possible matches as you type.
Showing results for
Search instead for
Did you mean:
Create a new article
Options
3931
Views
0
Helpful
0
Comments

Server and storage virtualization is a hot trend gaining momentum in nearly all industries with its promise of reducing the total cost of ownership in the datacenter. Running multiple virtual machines (VMs) on a single server is not a new concept, but the levels that are now possible open the door to endless use cases and opportunities for scale. This generates both excitement and concern for datacenter operational teams that must ensure critical business applications running on virtual server and storage platforms perform reliably and remain available at all times. Network infrastructure virtualization solutions are also beginning to crop up in datacenters, as VM considerations such as mobility, access, high availability and security must be dealt with. Network architects are evaluating and deploying many of these new technologies including virtual access switches, virtual routers, and virtual security appliances.

Most IT organizations require that some level of certification testing be completed prior to deploying any new datacenter system or design in order to prevent outages that may impact revenue. Most out-of-service, or lab testing efforts involve building a prototype of the proposed network design and then using test tools to generate simulated application traffic on the network under test while it is subjected to stresses such as simulated failures or high levels of network traffic and transactions. As network engineers and testers begin to peel away the various layers of complexity with these virtualized datacenter designs, they will soon come to realize that their legacy testing tools will likely come up short in their ability to test end-to-end solutions, and that the only way to truly validate virtual networks designs is with virtual tools.

Test methodologies for conformance, functionality and performance testing of network systems and devices have not drastically changed over the years, despite test tools becoming more sophisticated with their ability to simulate applications and quantify a users “quality of experience”. The RFC 2544 standard, for example, was established by the Internet Engineering Task Force (IETF) in 1999, and is still considered the de facto methodology for benchmarking performance metrics of network systems. This RFC provides an out-of-service benchmarking methodology using throughput, back-to-back, frame loss and latency tests, with each test validating a specific part of an SLA. The methodology defines the frame size, test duration and number of test iterations. Network Engineers familiar with this methodology will immediately recognize the challenges applying it to the virtual world. For example, how would you go about benchmarking the maximum no drop rate of a Nexus 1000V software switch that has no physical ports to plug a traffic generator into? How would you gauge database replication performance between two VMs that reside on the same host? Will web performance between two VMs communicating through a virtual firewall match that of a physical device during the busy transaction hours? Network Engineers are realizing that the only way to conduct these types of out-of-service benchmarking tests are with software-based test tools that can reside on a virtual machine, allowing them deepest visibility into the virtual datacenter infrastructure.

Figures 1-4 below illustrate some functional use cases for VM based test tools that can be leveraged to validate the functionality, conformance, baseline performance and security of a virtualized datacenter.

The first test case shown in figure 1 shows how virtual test ports installed directly on a hypervisor can be used to measure VM to VM performance by sending test traffic between test port VMs that reside directly on a host under test. This testing can be limited to intra-chassis VM performance, or extended to inter-chassis and network performance testing by deploying ports on different hosts.

The second test case shown in figure 2 illustrates how a vSwitch such as the Nexus 1000V can be evaluated for performance, scalability and switch feature conformance in accordance with RFC 2889. A large number of VM-based test ports would be utilized to setup various test flows, including unicast and multicast as called for by the particular design requirements.

The third test case shown in figure 3 presents a “Cloud datacenter” design, where the Cisco Virtual Security Gateway (VSG) is leveraged to separate a VM deployment into “zones” so that zone-based firewall rules can be applied for inter-VM communications. An ASA 1000V Cloud firewall is positioned at the edge of each zone to secure the cloud perimeter against network-based attacks. By deploying a combination of VM-based test ports on the hosts, and physical test ports on the network, it is possible to validate functionality as well as conducting the standardized RFC 2647 “Benchmarking Terminology for Firewall Performance” test suites to thoroughly evaluate the performance of the virtual firewalls.

The final example in figure 4 presents a use case to validate the loss incurred during a live VMWare (VM and/or Storage) migration from a primary to secondary datacenter. In this example, test traffic sourced or destined to a VM-based traffic generator would incur loss during VM VMotion, and the duration of this loss could be used as a benchmark for calculating the effect on user applications. 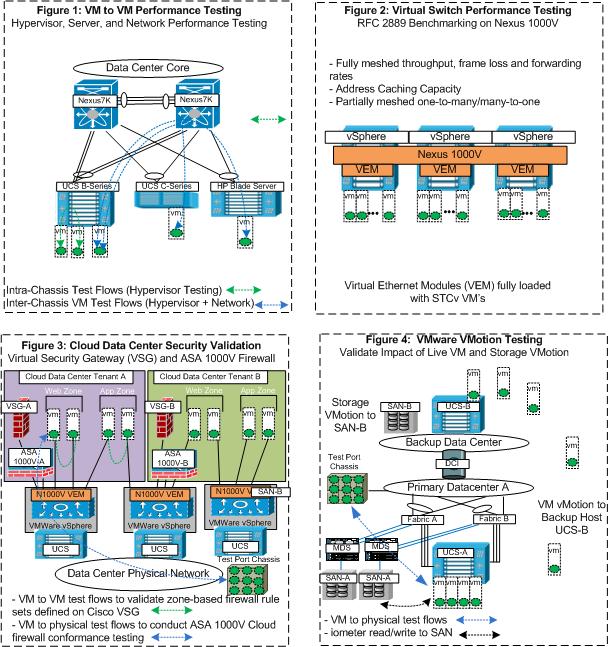 Spirent Communications http://www.spirent.com/ is one of the leading vendors in the test tool industry, providing network and application test tools used by Enterprise, Service Provider, Government, and Network Equipment manufacturers. Spirent was one of the first vendors to develop a test solution that allows VM-hosted test ports to be controlled by a common GUI and API that is also used to control its chassis based test systems. Test engineers familiar with Spirent TestCenter will find Spirent TestCenter Virtual (STCv) to have the exact same look and feel, where the VM-based test ports appear as dedicated test chassis with a single port installed. All of the standard conformance, performance and functional tests that are supported on physical STC ports are also supported on virtual (STCv) ports.

This section describes the various components of STCv, and the infrastructure elements required to host, control, and manage it in a test topology. 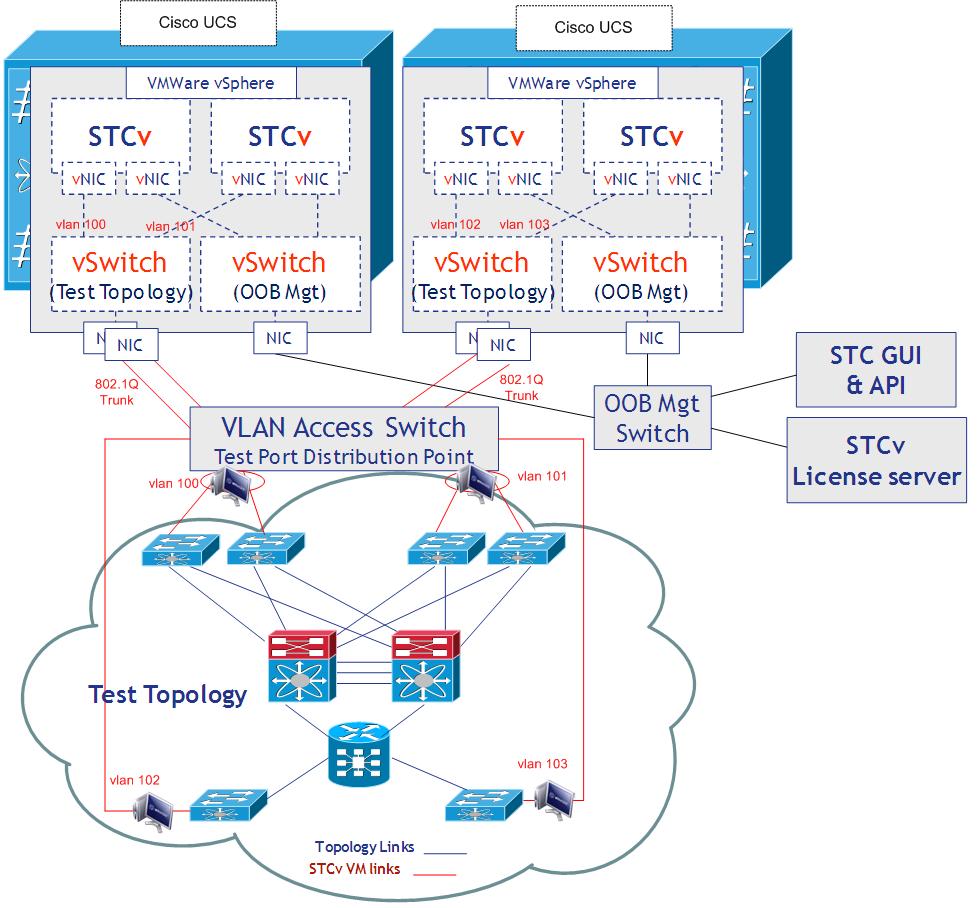 The following steps will help guide you through an STCv deployment on Cisco UCS.

Tom Kunath, CCIE No. 1679, is a Solutions Architect in Cisco Systems Enhanced Customer Aligned Test Services (eCATS) Team. With nearly 20 years as a consultant in the networking industry, Tom has helped design, test and deploy some of the largest Enterprise, Financial, Service Provider and Federal Government customer networks. In addition to his CCIE, Tom holds a Bachelor of Science degree in Electrical Engineering and industry certifications from Juniper and Nortel Networks. 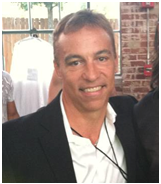 Enterprise Network Testing: Testing Throughout the Network Lifecycle to Maximize Availability and Performance

This article was featured in the August issue of the Cisco TS Newsletter. Are you subscribed?
Labels:
0 Helpful
Share
Getting Started