Turn on suggestions
Auto-suggest helps you quickly narrow down your search results by suggesting possible matches as you type.
Showing results for
Search instead for
Did you mean:
Start a conversation
Options
1555
Views
5
Helpful
3
Replies

My arguments against summarizing these subnets, is that a local switch block usual doesn't contain much subnets, so summarizing wouldn't increase performance that much. Then why summarize?

I cannot find the correct answer in my CCDP book and the Cisco design documents don't provide me with an answer either. What do you think?

Further on it saids:

Beginner
In response to DaSt-1986
Options

Turns out this is a classical "just try it out"-situation. I build this in Packet Tracer to see what would happen. I build the following network: 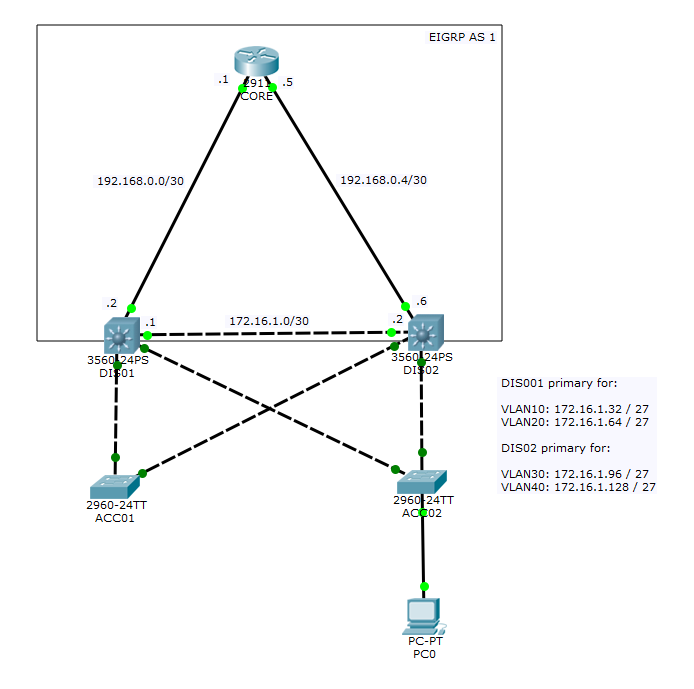 I use a looped layer two design between the distribution and access layer so I can use HSRP for the VLANs. I aligned the PVSTP root and HSRP priority for these VLANs so DIS01 is primary for VLAN10 and VLAN20 and DIS02 is primary for VLAN30 and VLAN40. This way, we do a little load balancing over the switches (although this results in assymetric routing from the core since it uses ECMP).

Now, when I disable a VLAN on one of the distribution switches, it removes the local connected subnet from the routing table, but a new route isn't added; the other distribution switch only advertises a summary route which doesn't get installed in the routing table since it already has a route with the same prefix to a local connected interface (Null0, as seen above). More specific routes are not advertised. This creates a black hole from the Core which is still using ECMP.

If I would use a layer three design between the Distribution and Access layer (which is a little more expensive but results in a much cleaner design), this problem wouldn't exists if I would use contiguous subnets on the access switches.

I attached the Packet Tracer file to the post so you can try for yourself (rename to a .pkt file)