Cisco Community
English
Register
Login
RegisterLogin
Options
Turn on suggestions
Auto-suggest helps you quickly narrow down your search results by suggesting possible matches as you type.
Showing results for
Search instead for
Did you mean:
248
Views
0
Helpful
2
Replies
Highlighted

I have the following topology wher PE4 is a provider edge of an MPLS cloud, and Internet is a simple router. 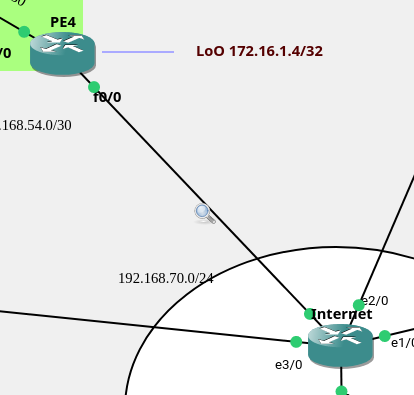 I would like to ping those two router between them. Therefore I ran the following command:

At first glance I thought a configuration error would prevent the correct ICMP exchange. However after inspecting the link between them, I can see the ICMP packets were sent just fine from both ends. Notice in this screenshot that I took pings from both ways.

On the other end, Internet can ping PE4 just fine.

I expected PE4 to accept the ping replies just fine. What causes this behavior? How can I fix it?

I attached the configuration of PE4 (which I know is quite bloated) for reference.

Thank you for your suggestions

Labels:
Preview file
4 KB
I have this problem too
0 Helpful
Reply
2 REPLIES 2
Highlighted

You're right, this command works!

My bigger issue was: through the MPLS cloud, a ping to 192.168.54.1 is successful, but "pinging" any route directly connected to "Internet" won't work.
I guessed the issue stemed from this connectivity issue. If I understood correctly, this means is that when "pinging" a route connected to "Internet" from another end of the MPLS cloud, the packets simply can't be routed through the cloud (lack of gateway or similar I guess) hence my "Network unreachable" errors.

If what I said isn't nonsense I think I figured the reason of my issue.

EDIT: for others trying to set up internet access & MPLS, I should have found this doc before: https://www.cisco.com/c/en/us/support/docs/multiprotocol-label-switching-mpls/mpls/24508-internet-access-mpls-vpn.html