Random MAC Address - How to deal with it using ISE

Mobile endpoints utilizing random MAC address is nothing new. But the way it is utilized has changed since it was first introduced. In the beginning, the randomization of MAC was used to probe for known wireless networks by the devices. By randomizing the MAC address used in the probe request frame, devices were able to hide real MAC address thus providing some level of privacy. Fast forward few years, now devices started using random MAC addresses for the association to the wireless networks. This causes issue on the network elements which relies on MAC addresses to uniquely identify the endpoint or the user behind it. The implementations of MAC randomization are different depending on the vendor but here are few examples of the behavior:

Although this document is focused on ISE, it should be noted that the impact doesn’t stop with ISE. As MAC address as a unique identifier is hard-coded into products and solutions throughout Cisco and 3rd party, which includes MDM/EMM, wireless performance monitoring, and device profiling systems. ISE or wireless authentication system is in a unique position in the network to control the use of random MAC address for the rest of the network. The good news is that generation of random MAC follows rules set by IEEE. As noted in the diagram below, locally significant address 2’s bit of first byte is set to one. Any MAC address that has locally significant bit set as one and is also a unicast address can be considered a random MAC address. 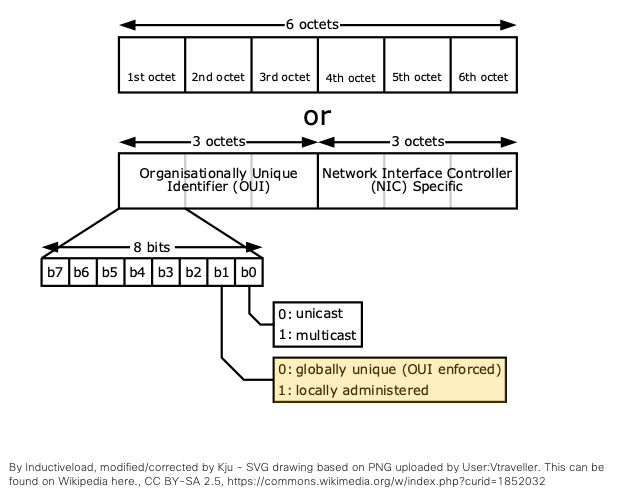 With this, ISE policy rule can be created using a regular expression match against the RADIUS Calling-Station-ID attribute within the RADIUS Access-Request which includes the client MAC on virtually all Cisco devices: ^.[26AEae].* 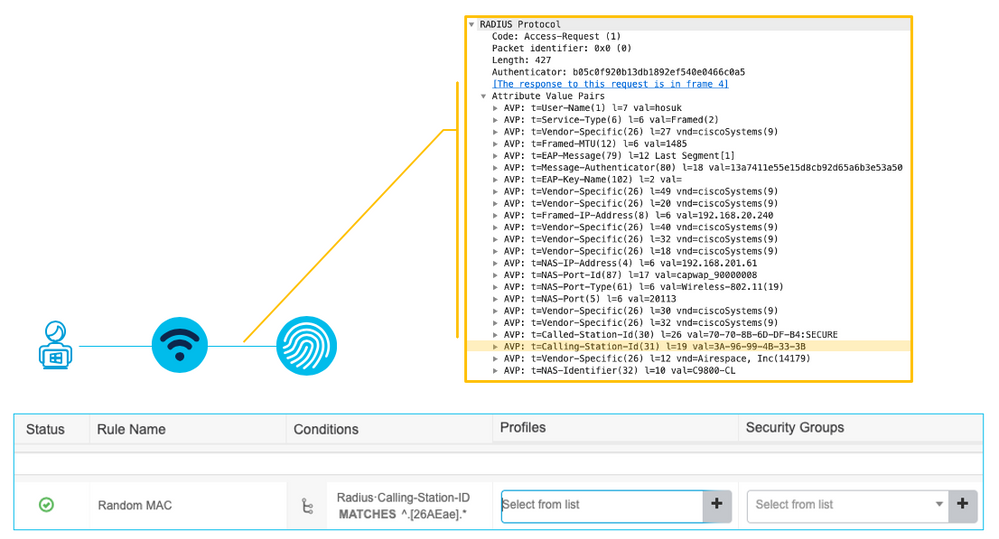 Now that ISE can detect the random MAC, here are few options to consider:

Note: Option 3-6 can be augmented with additional permission to restrict bandwidth, ACL, VLAN, etc. if needed.

The following devices have been confirmed to match the random MAC policy rule:

Note: Please note that some devices may match the random MAC policy rule even though they may not be using random MAC address due to OUI assignment that overlaps with the IEEE rule noted above.

How can this be achieved with ISE only? We don´t want to host a Webserver for this purpose

Hi D4rkie, you don't need to have another Webserver for option 2.  All you need is to create a guest portal on ISE. Please check this out to see how.

Does anyone encountered MAC randomization even when device is connected to mobile data and not WiFi?

If so how can you disable it?

@Hideyuki Nakai I followed the instructions for the Random MAC hotspot, and users match the policy but the redirect never happens.

From this article it doesn't mention any other config needed, but on the controller I enabled ISE_NAC and had to have a VLAN with permit access to the PSN's.  Now the only issue is the web redirect isn't automatic on the iOS device, but does at least gets a message on Android that it needs to connect and then the redirect happens.  On iOS you have to manually get it to pop up with a web browser.

@drichards21 drichards21, can you confirm whether the captive portal bypass feature is enabled on the WLC or WLAN. You will need to disable it for the iOS auto pop-up to work. https://www.cisco.com/c/en/us/td/docs/wireless/controller/8-2/config-guide/b_cg82/b_cg82_chapter_01010111.html (Note that later WLC OS supports per WLAN captive portal bypass)

@drichards21 The captive portal bypass feature only affects Apple devices, so the fact that it works for Android doesn't mean it is not enabled. If not popping up for Apple devices only, I would check the settings again. The controller side setting only takes effect when the WLC is reloaded so even if it says it is disabled doesn't mean it is disabled until reloaded, however the WLAN specific feature works without reload. Another reason it may not be popping up on Apple device may be the DNS ACL entry on the redirect ACL. I would make sure apple.com or captive.apple.com is NOT in the DNS ACL for redirect.

@howon let me clarify it isn't working on the Android, it just gives a message when connecting saying you must connect to this network and when you click on it the banner pops up.

I will try rebooting the controllers when I can (off business hours), but the TAC engineer Glen that helped me today failed to mention we needed to reboot

@drichards21 Got it. Since your Android is prompting, it is seeing the captive portal. However, Android requires the portal to have proper certificate. If you are using self-signed, it may not work on Android captive portal browser. Also, what do you mean by 'banner pops up'? Can you share a screenshot of the experience?

@howon rebooting the controllers fixed it, and to add another note a URL_REDIRECT_ACL was needed not just on the Controller ACL but also applied our on FlexConnect Groups policy too.

Thanks for your reply though that was the trick, reboot the controllers!

Edit:  We used the following commands in CLI

@howonyou are right, I did a bad test on VPN connection through a device using mobile data.

I confirm the MAC is the same always.

Latest Contents
Anyconnect from anroid
Created by Mohamed Elwakeel on 01-24-2021 05:28 AM
0
0
0
0
I'm getting the following error when connecting from my anyconnect for android mobile "Connection attempt has failed due to server communication errors. please retry the connection" While the connection is working from my PC using anyconnect client.
CAN NOT ADD MY FTD IN MY FMC
Created by CSCO12674262 on 01-24-2021 04:06 AM
1
0
1
0
hi, i used ftd in version 6.2.3.7 AND MY FMC SERVER IN 6.2.3.16 i have this message when i add my ftd in my fmc i use this cimmande "configure manager add X.X.X.X pass  "getPeersByRole: unable to connect to db at /ngfw/usr/local/sf/lib... view more
Cisco ISE 2.3 Version Upgradation to latest stable version
Created by preetpeethambaran on 01-24-2021 03:30 AM
1
0
1
0
Hi, We are presently having Cisco vISE version 2.3 with 1 ADM & 2 PSN node deployment. As version 2.3 is out of Cisco TAC support, we are planning to do a parallel vISE implementation to stable supported version. Please let me know, latest s... view more
access control list help
Created by CSCO12540724 on 01-23-2021 10:36 PM
1
0
1
0
I am wondering how to create an ACL for this scenario:LAN-A connected to Router-1 on fa0/0 and subnet  is 1.1.1.0/24LAN-B connected to Router-1 on fa0/1 and subnet  is 2.2.2.0/24 ACL requirement:LAN-A can initiate and continue the conversat... view more
Cisco ise Nagios monitoring trought OID
Created by Fabio885 on 01-23-2021 08:20 PM
1
0
1
0
Question I have a Cisco ISE 2.6 rel. and i need to monitor his cpu, ram and storage trought my NMS Nagios. i configured correctly snmp v3 on cisco ise and from nagios side it can be pinged or snmpwalk to see entire mib. Are there oid that p... view more
CreatePlease login to create content
Discussion
Blog
Document
Project Story
Video
Related Content
Discussions
Blogs
Events
Videos
Project Gallery
Content for Community-Ad