Welcome to the new Cisco Community. LEARN MORE about the updates and what is coming.
Turn on suggestions
Auto-suggest helps you quickly narrow down your search results by suggesting possible matches as you type.
Showing results for
Search instead for
Did you mean:
Create a new article
Options
6049
Views
0
Helpful
0
Comments

The task of deploying a network IPS (Intrusion Prevention System) device can be quite overwhelming for a network or security professional that hasn’t done it before. Before tackling such a task, it is very important to understand Cisco Signatures. The purpose of this document is to help a network or security professional understand Cisco Signatures, which includes the properties, engines, alerts, and actions. The content will remain at a high level, but there is more in depth information related to these topics found in the CCNP Security IPS 642-627 Official Cert Guide as well as the Cisco Configurations guides for the Cisco IPS appliance and IOS IPS.

IPS Signatures are a set of rules used by Cisco IPS sensors to detect known attacks, such as denial of service (DoS) attacks. The sensors analyze packets and, if malicious, a signature is triggered based on the way the IPS sensor has been configured to react to such. Cisco IPS sensors have some critical signatures enabled by default to ensure that a level of security is maintained after the sensor is integrated into the network, leading quickly to compliance with the Security policy as the case may be.

The Cisco IPS engines run simultaneously with one another depending on the number of signatures that are enabled. Each engine is composed of a parser, an inspector, and a set of parameters that have configurable ranges or sets of values. These configurable parameters enable you to tune signatures to work optimally in your network and to create unique signatures as the occasion demands.

Another example is the ATOMIC.IP engine, which inspects IP protocol headers and associated Layer 4 transport protocols (TCP, UDP and ICMP) and payloads. It controls signatures such as the following:

Figure 1 below shows the properties of signature 1006 described:
(click on the image to enlarge) 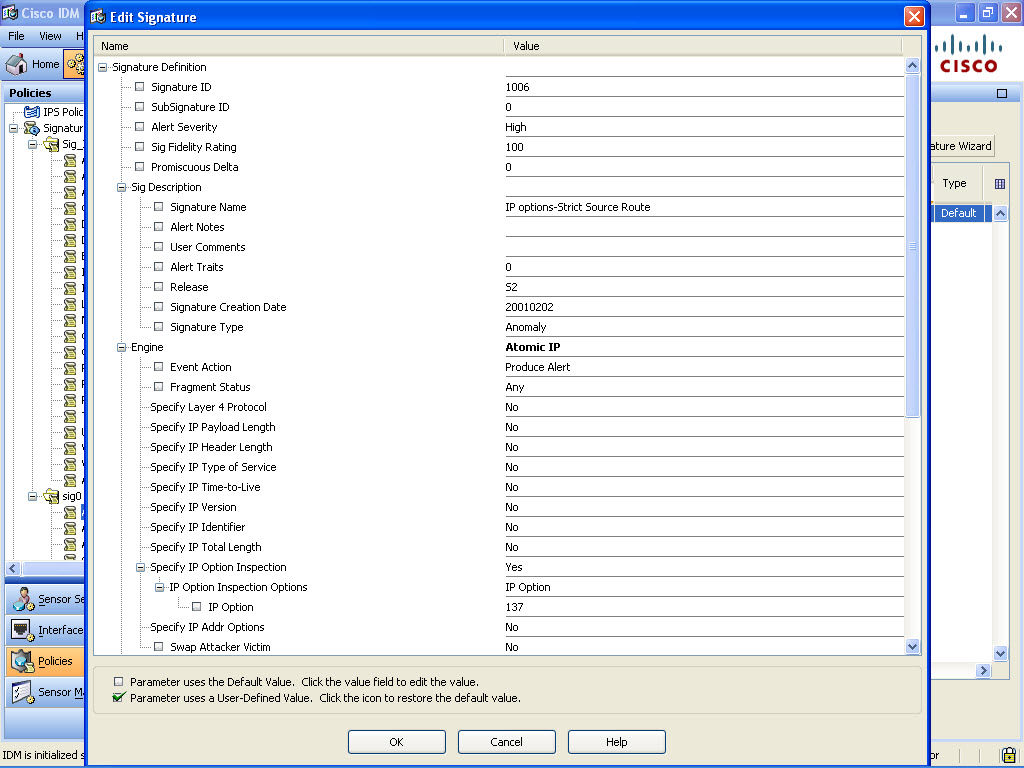 The Cisco IPS sensor generates alerts by default after a signature is triggered due to matching malicious traffic. The alerting feature is a configurable signature action that can be disabled or left enabled. It is recommended to leave it enabled. Alerts are stored in the sensor EventStore, which is a fixed-size indexed store. The Cisco IPS Device Manager (IDM), Cisco IPS Manager Express (IME) or Cisco Monitoring Analysis and Response System (MARS) can pull alerts from the sensor via the Security Device Event Exchange (SDEE) protocol, which allows a host or hosts to collect alerts as needed without tasking the sensor processor.

There are two types of event requests used by the SDEE protocol for external monitoring applications as mentioned above when interfacing with the sensor:

These severity levels do not affect the format of the alert, because it stays consistent irrespective of the severity level. The format of an alert as it appears in the CLI conforms to the Cisco Intrusion Detection Event Exchange standards. The Cisco Intrusion Detection Exchange extends the SDEE and adds IPS specific elements that are used in Cisco IPS Sensor Software Version 7.0 alerts. A commonly used CLI command to view these events is show events alert.

The Cisco IPS sensor software version 7.0 contains more than 4500 built-in default signatures of which approximately 1500 are enabled by default. These signatures will increase as new known threats are discovered. The Cisco IPS can automatically update its signatures or it can be done manually. You cannot rename or delete built in signatures, but you can retire signatures that are old or are not applicable. If you are not running an application on your network, a signature preventing attacks to such an application is not required. Retiring signatures conserves memory and improves the performance of the sensor.

Note:  Sensor performance can be improved by retiring signatures that are not in use or that are not applicable. You can always re-activate retired signatures if the need arises.

As discussed previously, the mode in which the IPS is deployed or operates determines the criteria that trigger an action by matching network traffic. Typically, the sensor will operate primarily as an IDS, IPS, or a mixture of both. The Cisco IPS Sensor allows you to have various detective or preventive actions based on the signature. While some of these actions will work only in inline mode, others will work only with specific network protocols. Due to the cumbersomeness of configuring actions for each signature, Cisco pre-configures many actions for specific signatures and provides additional configuration tools allowing you to easily modify actions to many signatures at the same time.

The Cisco IPS supports the following detective actions based on matching network traffic:

Dave Burns joined Cisco in July 2008 as a systems engineer working for a U.S.-based SP Mobility account. He came to Cisco from a large U.S.-based cable company, where he was a senior network and security design engineer. Dave has held various roles prior to joining Cisco during his 10-plus years in the industry, working in SP operations, SP engineering, SP architecture, enterprise IT, and United States military intelligence communications engineering. He is currently a Systems Engineering Manager working with US Service Providers on various architectures that include IP NGN, Data Center, Cloud, Security, Mobility, and Transport. He holds various sales and industry and Cisco technical certifications, including CISSP, CCSP, CCDP, and two associate-level certifications. Dave recently passed the CCIE Security written exam, and is currently preparing for the CCIE Security Lab. Dave is also currently working on his Masters in Business Administration in his ‘free’ time.  Dave earned his Bachelor of Science degree in telecommunications engineering technology from Southern Polytechnic State University, Georgia, where he currently serves as a member of the industry advisory board for the Computer & Electrical Engineering Technology School.

This article was featured in the September issue of  the Cisco TS Newsletter. Are you subscribed?
Labels:
0 Helpful
Share
Getting Started