Cisco Community present at Cisco Live EMEA 2023. See you in Amsterdam! Learn more.
Turn on suggestions
Auto-suggest helps you quickly narrow down your search results by suggesting possible matches as you type.
Showing results for
Search instead for
Did you mean:
Create a new article
Options
25439
Views
0
Helpful
17
Comments

Citrix Access Gateway (CAG) was traditionally the only way to provide secure remote access to virtualized Citrix resources (desktops and applications). In typical deployment such device would be located behind the firewall in DMZ zone. Current feature adds ASA functionality to support secure remote connection to virtual resources from mobile devices.

With ASA, connections to internal Citrix resources is possible without presence of CAG:

A new ASA handler is created to handle requests, including authentication requests from Citrix Receivers (HTTPS requests with agent string identifying itself as Citrix Receiver). After ASA has verified the credentials, the Receiver client starts to retrieve entitled applications through the ASA. The ASA rewrites and proxies to the XenApp or XenDesktop Server’s XML service interface (XML service is a service running on a Citrix server that service virtualization resource related requests).

When a user uses Citrix Receiver mobile client to log on to the ASA, the ASA needs to connect it to a pre-defined Citrix XenApp or XenDesktop server. For this, the administrator configures the Citrix server’s address and logon credentials under Group Policy or username. In case both username and group-policy CLI are configured, username settings will take precedence over group-policy.

• type: type of VDI. For Citrix Receiver type must be citrix

• url : full url of the XenApp or XenDesktop server incluiding http or https, hostname, port number, as well as the path to the XML service.

• username: username for logging into the virtualization infrastructure server, this can be a clientless macro

• domain: domain for logging into the virtualization infrastructure server, this can be a clientless macro

The following are valid configuration examples: 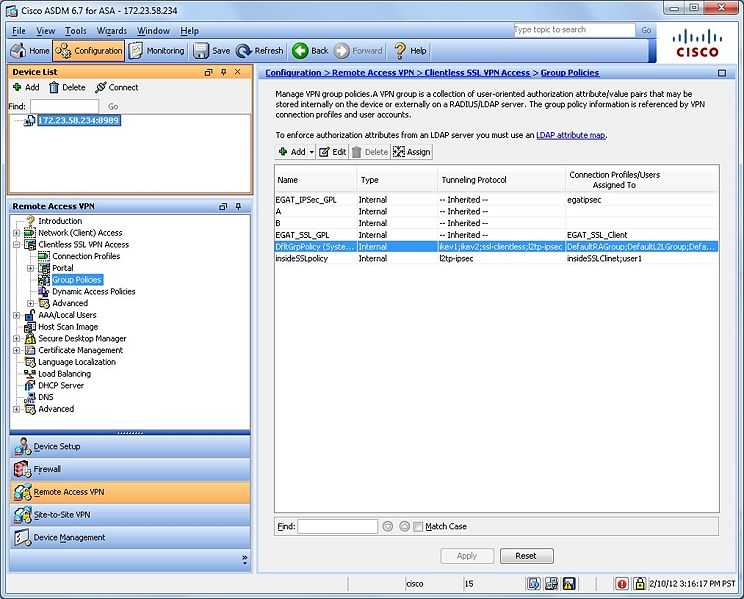 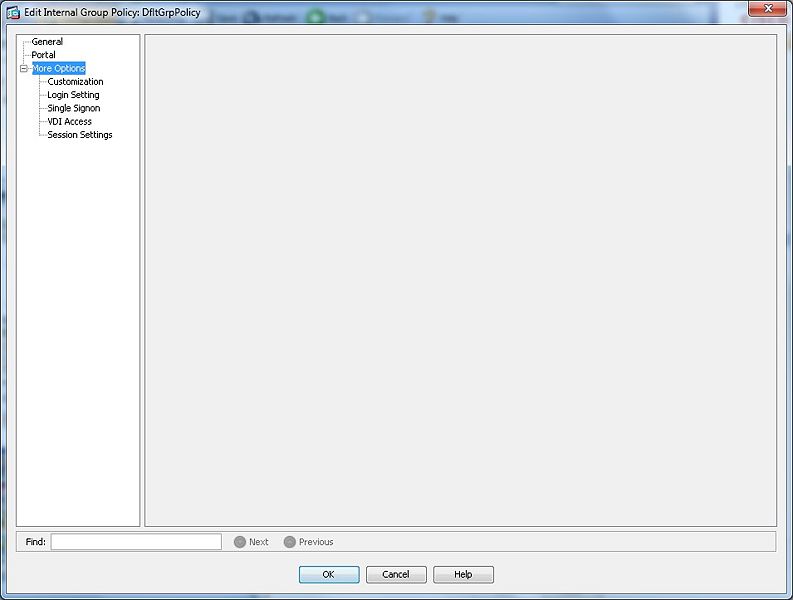 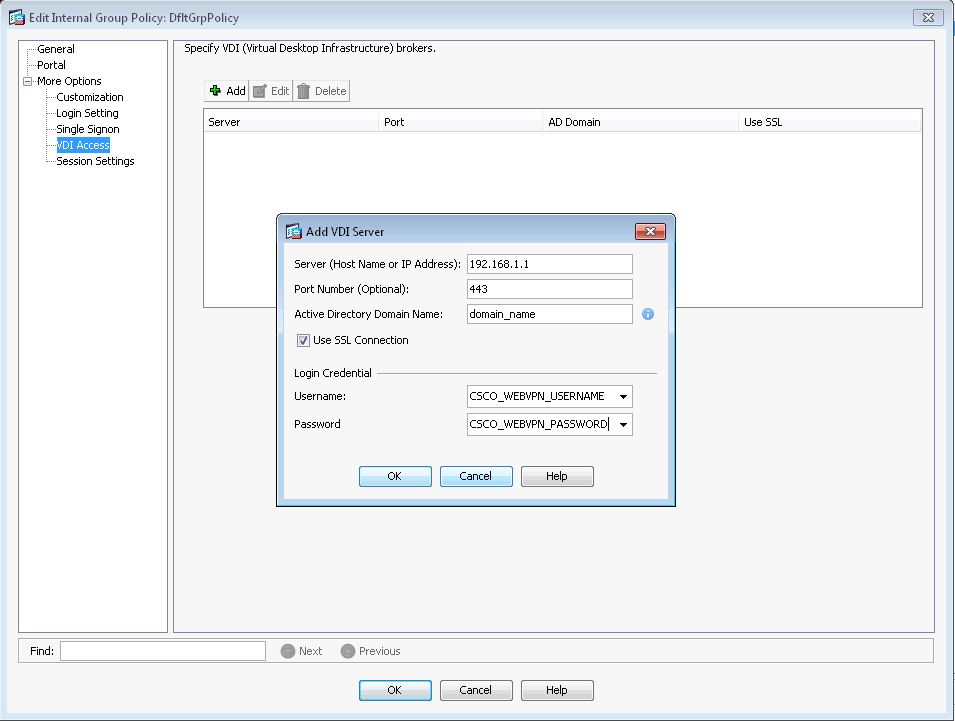 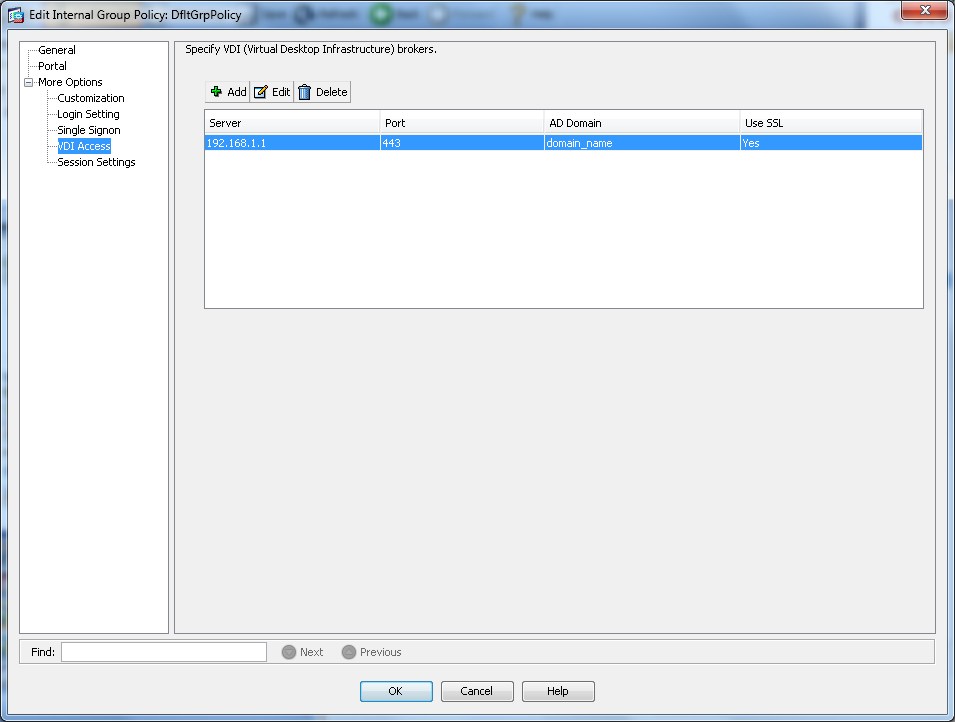 The user experience of using Citrix Receiver to access virtual resources via the ASA is the same as when a Citrix Access Gateway is used.

If no servers are configured, user must configure a new virtual resource. 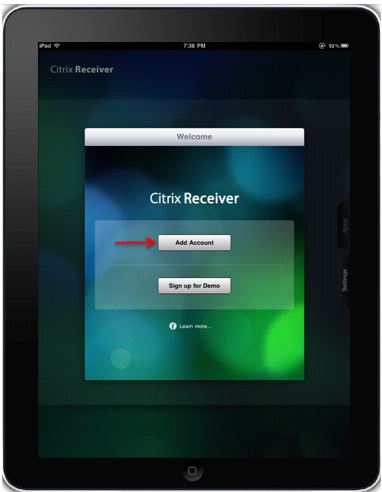 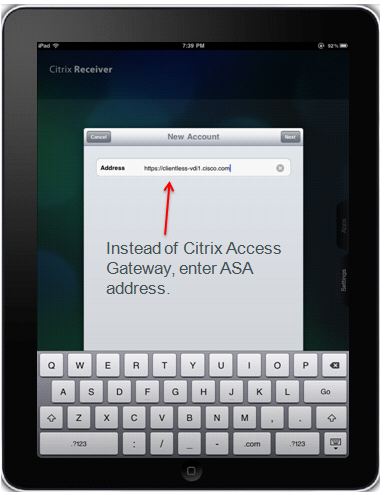 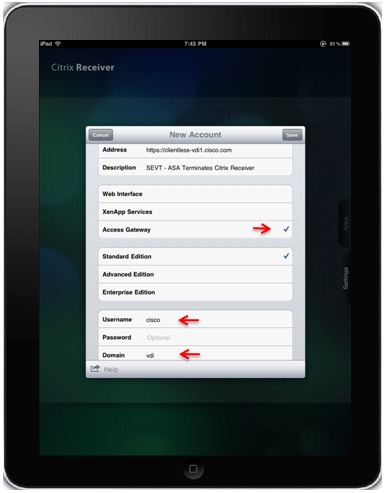 When user profile is saved, application will automatically ask for credentials (ASA) and try to login. 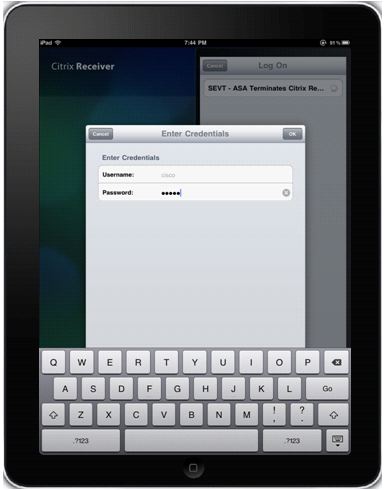 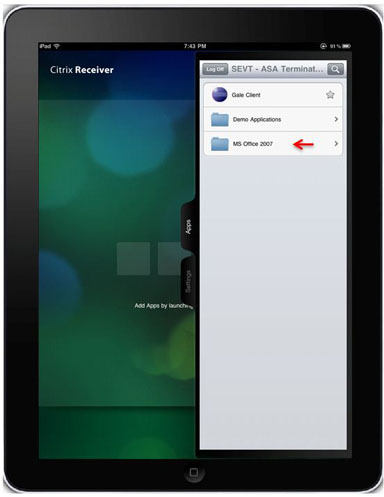 Users can navigate folders and click the corresponding resource to launch it. 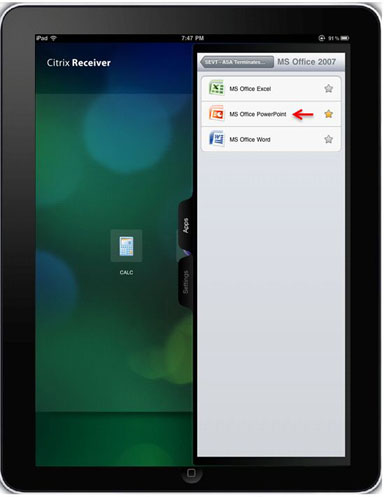 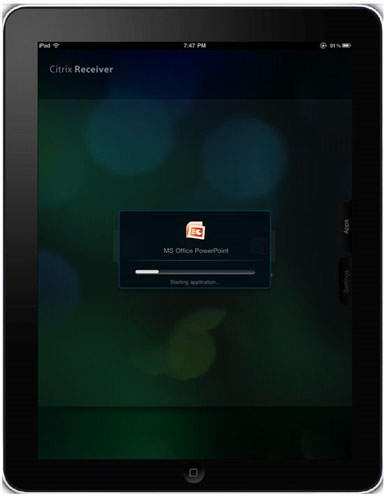 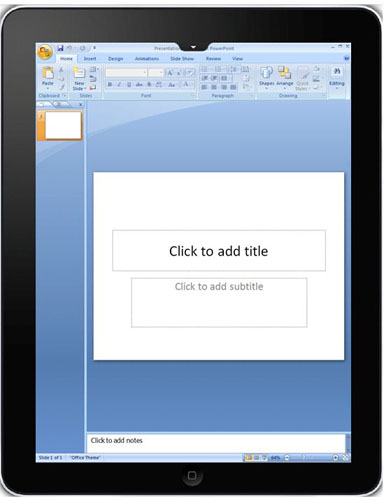 Citrix Receiver application does not provide means to terminate webvpn session with connected ASA or CAG at will. Typically such session will be terminated upon reaching configured timeout. Although newest version of Citrix Receiver have a new button "Logoff", such button does not terminate existing session with ASA. Instead it closes all open applications, and displays to user the list of configured servers. Therefore, if ASA is configured to use only 1 license per user, clients that use "Logoff" button will not be able to log back in until after session times out.

To allow end-users terminate webvpn session at will, and as a result release ASA license, new functionality has been added to injects Secure Logoff resource.

Such injection happens every time Citrix Receiver fetches the list of published resources.

When user clicks on Secure Logoff application, the session between ASA and Citrix Receiver is terminated. To properly release ASA license, Secure logoff resource must be used to terminate webvpn session instead of native Citrix Receiver Logoff button.

Different messages are displayed as a result of session termination based on the mobile devices and the version of the Citrix Receiver. Also, the difference in the way Citrix Application is written for different mobile platforms yields different user experience when logging off Android devices.

On iPad and iPhone, Citrix Receiver will display message Your access to Gateway session has expired, please log on again. When user clicks OK, Citrix receiver brings up the screen with configured servers. 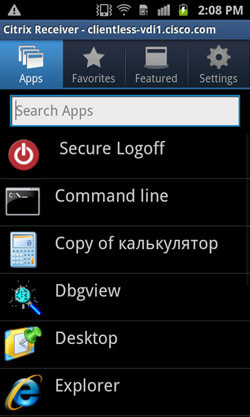 However, when user clicks Secure logoff application, network connection Error will be displayed. 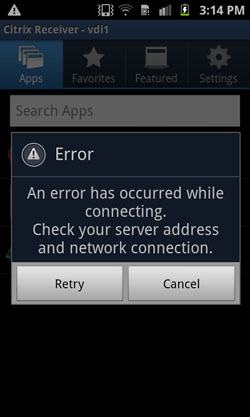 Although by this time the webvpn session is terminated, Citrix Receiver application does not have embedded messages to properly inform the user of further actions. Note that this behavior is expected. When such "Error" message is displayed as a result of terminating session, users are expected to click "Cancel" button, then "Back" button on Android device to exit current account, and confirm "OK" when asked about leaving the account. 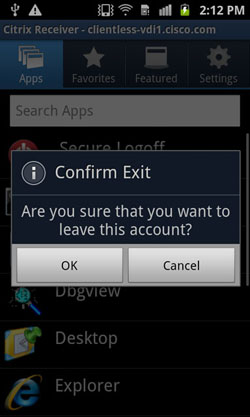 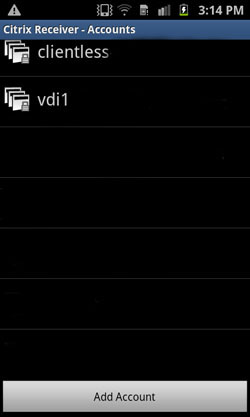 For XenDesktop to work through the clientless, if there are any intermediate firewalls between the ASA (inside) and the XenDesktop server, make sure the ports 443, 1494, 2598 and 80 are open on that firewall. Also, ensure that the ports are open for both the XenDesktop Server and the pool of XenDesktops.

This error is seen when the connection to the XML broker (XenDesktop server) is allowed, but the ports 1494 and 2598 to the actual XenDesktop pool is blocked. You can debug by enabling all ports and then narrow down the required ports.

Answer: These parameters are defined on the XenServer and are part of the ICA file. The ASA does not modify these parameters. So, what ever setting you have on XenApp or XenDesktop will be reflected on the client. 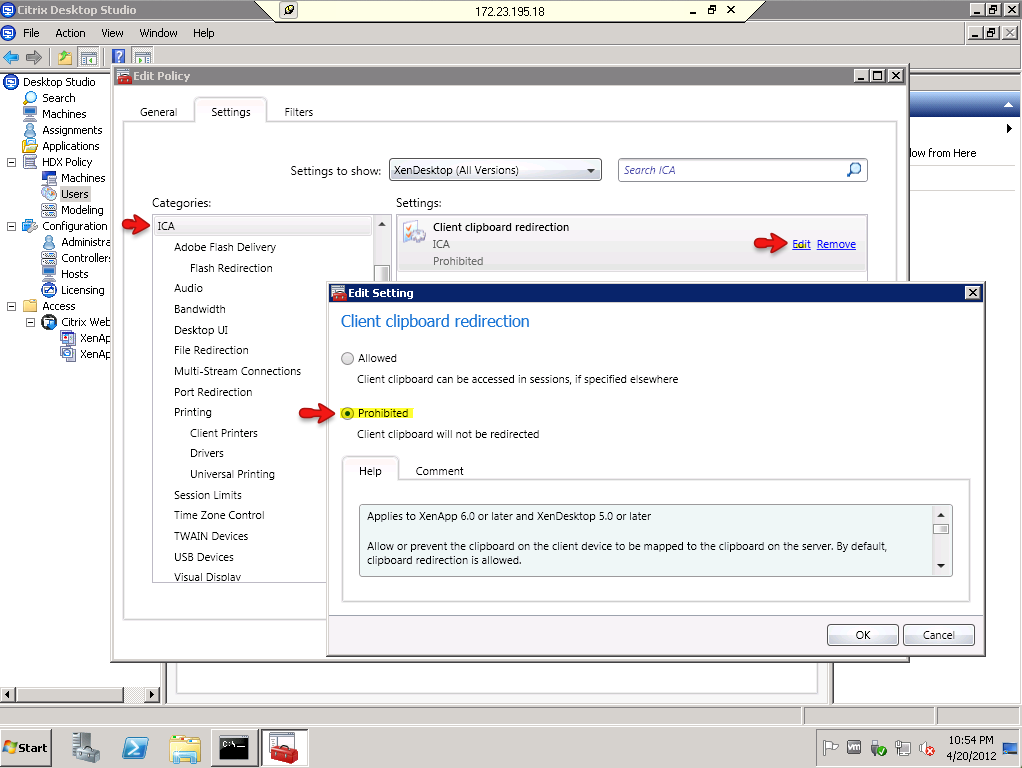 2. Does the ASA have granular controls of the ICA connection such as prevent cut-n-paste, control Printer, Drive, Clip Board or USB redirection?

Answer: ASA doesn't modify the above settings. So, what ever setting you have on the XenApp or XenDesktop will be reflected on the receiver client.

There is something wrong with the pictures. Could you fix it?

The URL's for the pictures are local URL's. You need to upload them to the internet. Right now they have the url like this:

My bad, never realised that.. Apologies, i will change it.

Can you fix the images or provide the url to the actual cisco documentation?

Any word on when the images for this post might be fixed?  This doc looks like it will provide some very useful information and I am anxious to start utilizing it!

Sorry for the delay, mates. Its done now.

Do the ASAs support the Windows 8 RT Receiver App?

Excellent article....you've put in good screenshots and made it understandable....keep it coming like this.

@Neil, Thanks for your support mate.

does it support ASA cluster balancing?

I presume it does, logically speaking. I haven't tested it yet myself though.

Hi , Could you please clarify whether Cisco ASA 9.0(2) does support Citrix plug-in clients based on Windows OS for Xen App application access ?

Which Basically means it doesnt work with Xendesktop 7 since the only front-end for it is StoreFront.

Come on Cisco Fix the Bug!

With the configuration above and also with webinterfaceserver with browser with native receiver or JICA our ASAs uses only Port 1494 without CGP. What can I do so that the ASA use Port 2598 with CGP.

That would be useful just for mobile devices