Welcome to the new Cisco Community. LEARN MORE about the updates and what is coming.
Turn on suggestions
Auto-suggest helps you quickly narrow down your search results by suggesting possible matches as you type.
Showing results for
Search instead for
Did you mean:
Create a new article
Options
29666
Views
20
Helpful
1
Comments

Let’s start by defining what DNS Doctoring is:

This is the capability that an ASA offer us in order to translate the DNS A-record for a particular DNS query.

So for example if User A wants to go to www.jcarvaja.com he will send a DNS query in order to get the A-Record for that site (The record that will point the user PC to initiate an HTTP request to the IP address of that site).

The ASA will work with that DNS conversation as with any other packet flowing across the firewall (make sure the policy allows the traffic, if there is an inspection that the traffic does not violate any specific standard, etc.)

But what happens if we have the following Scenario: 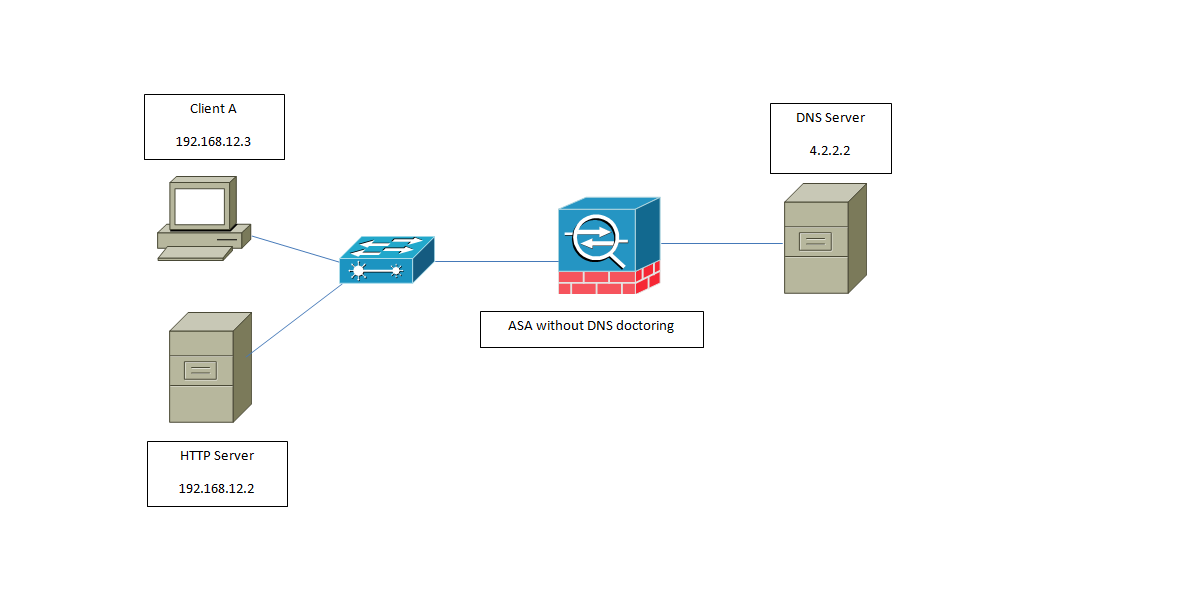 Let’s say that the HTTP server gets translated to the IP address of 80.80.80.80 on the Outside interface of the ASA.

What happens if the inside users want to reach the HTTP server on the Inside via the Public IP address?

We will see the following logs on the ASA when the issue happens:

This is where DNS comes to play, 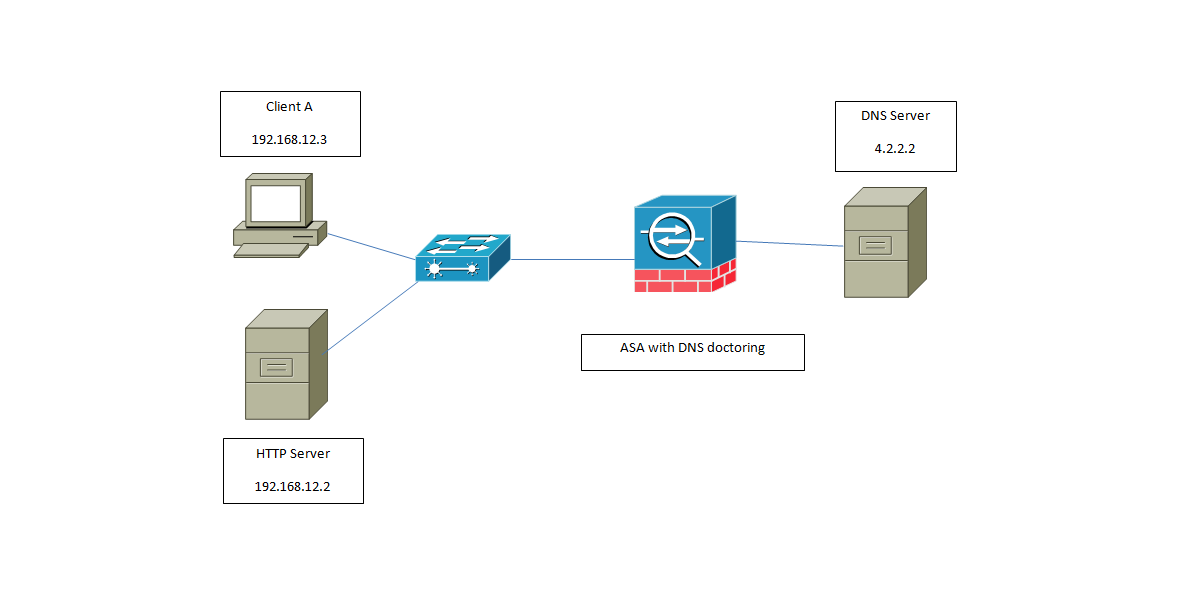 •1) Inside PC sends a DNS query for www.jcarvaja.com

•2) ASA forwards the packet to the DNS server on the outside Interface, which replies with the A-record for the site.

•4) The Inside PC will then initiate a connection to the internal HTTP server address and the connection will successfully will be built.

Cool stuff right but what are the requirements to run this feature:

What is U-turn or Hair-pinning?

It’s the capability that will allow an ASA to route traffic back the same interface where receive it.

Note: We do not necesarilly need to use a DNS server for this feature to work , if we have our application configured to use the Public IP address to connect to the server, the DNS server will be out of the picture, so the only case were we will need it is if we are trying to connect via the Domain-Name 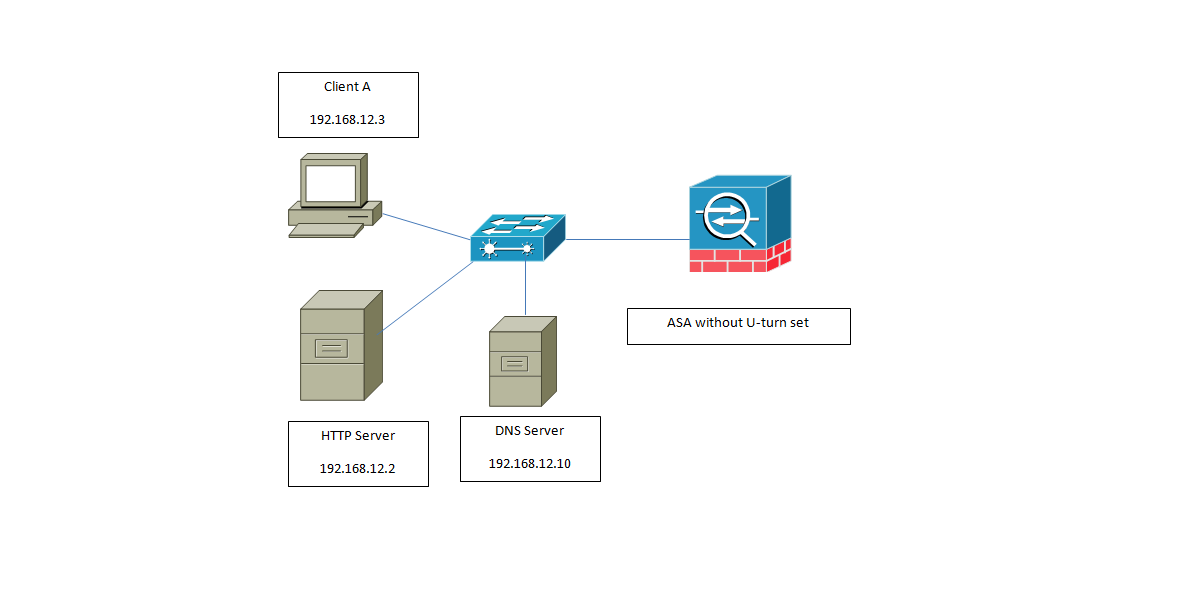 We are using an internal DNS server so DNS inspection is out of the picture,

•3- The Client will then connect to the Private IP address of the Server; the ASA will not receive any of this traffic as it’s being delivered on the LAN.

•3- The Client will send the traffic to its default gateway, the ASA in this case as the destination it’s not on the same subnet than him.

•4- The ASA receives the traffic and checks that it has a NAT translation for that traffic that points to an internal user.

But our customer wants to connect to the server using the NAT or public IP address how can we accomplish that?

That’s the whole idea of the U-turn. 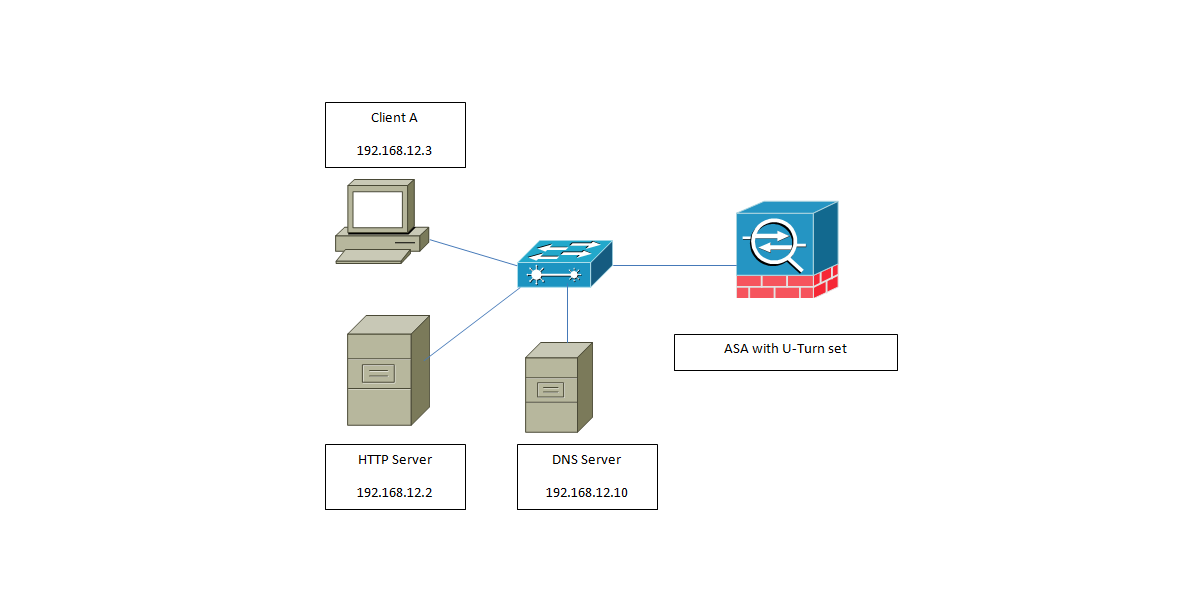 This command will allow the traffic to go to the ASA interface and then do a U-turn (So basically it says allow traffic that reaches X interface and needs to go out that same interface, some sort of disabling the Split-Horizon rule.)

By default this traffic gets denied.

If you receive a packet that comes from any inside user that needs to go to 80.80.80.80 translate the source (Inside user) to the ASA inside interface IP address and the destination (HTTP server) to 192.168.12.2

As simple as that we will be now allowing traffic to go out the same interface and we are performing the right NAT translation to let the user connect to the public IP address of that Server.

So we are basically playing with both Source and Destination.

The traffic flow with the above configuration would be like this:

1- The client will send a DNS query for the site www.jcarvaja.com, It will get the A-record from the DNS server pointing to 80.80.80.80

2- It will then generate a connection to that IP via the ASA, as the ASA is the default-gateway of the LAN.

3- The ASA will receive the packet and the connection will match a Nat rule (The Twice NAT rule that involves both Source and Destination).

4- The Source and Destination IP address on the header will be modified and the connection will be allowed to go out the same interface where it came.

5-Traffic will flow back and forward via the ASA.

"Using this method the connection will get established"

•- Traffic must reach the ASA so we can perform the translations there.

•- If there is an ACL already applied to that interface make sure we allow traffic to that Public IP address.

That basically covers both features (DNS-Doctoring and U-turn) on the ASA,

I hope this helps you,

What you have described in the article is what I'm trying to do but only with partial success. My setup is a follows:

- I use a SSL Certificate when I access the server on the inside (https://domin-name)

Problem: from the inside, I cannot use the domain-name only using the public IP works.

*Full disclosure:  The public IP that I'm using is dynamic from my ISP, but It has not changed since I've had the service even after several reboots. I'm using a Dynamic DNS service to update my domain name if and when the IP changes.