This document introduces TI-LFA (Topology independent Loop-free alternate) feature in segment routing environment. It has two purposes. One is to form an introduction to TI-LFA for those who are interested in using, evaluating, and possibly implementing it. The other one is to discuss how TI-LFA mitigates the challenges faced by direct LFA/RLFA (Loop-free alternative/Remote Loop-free alternate).

Before the advent of TI-LFA, pre-dominantly service providers deploy LFA or RLFA to achieve sub-second convergence. We are facing certain challenges in today’s LFA deployment for some specific customer topologies. The challenges are,

TI-LFA addresses the challenges that are faced by direct LFA or RLFA feature. The above mentioned 2 challenges will be addressed by deploying TI-LFA across the topology.

Apart from mitigating the above mentioned challenges, TI-LFA also serves the below protection services.

Let us discuss in detail how TI-LFA resolves the above mentioned challenges.

In the below figure, we have edge routers located at different geographical locations for providing Internet service or L3VPN or L2VPN services. Let us consider router R1 located at London as source and R3 located at Paris as destination.

To avoid using the R5 node located at New York as transit node in case of primary link failure, we have manipulated the metric. This metric manipulation has implication on choosing the backup FRR optimal path. 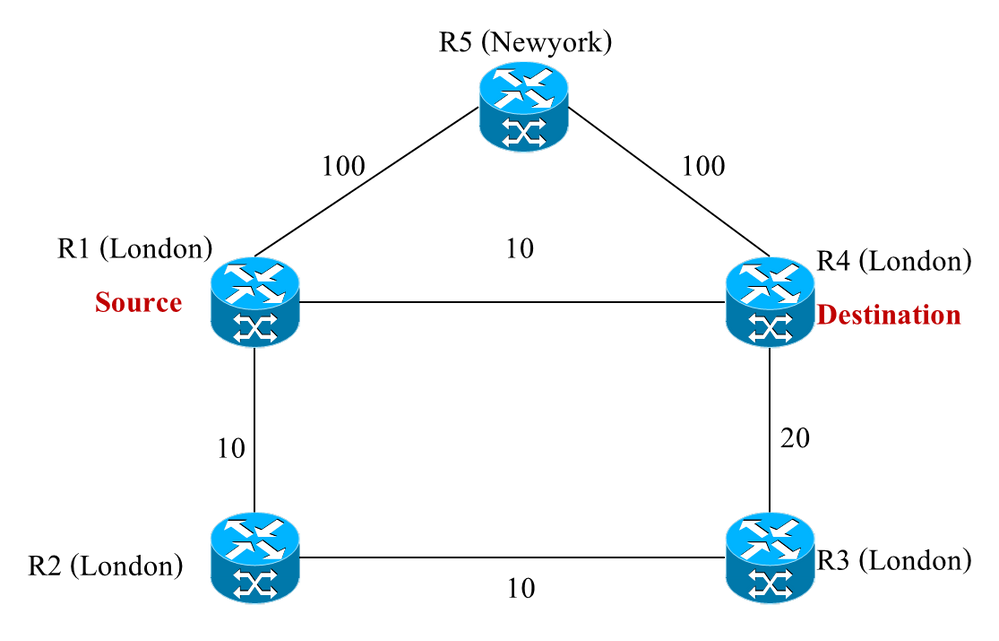 During the link failure between R1 and R4 (as mentioned in figure 2. Below), If R1 chose R2 as backup FRR path, it will send the packet back to R1, R1 will send again and this will create loop till it completes convergence. In other words, till R2 knows about the failure and completes the convergence. So in the below scenario R2 does not meet the direct LFA conditions. 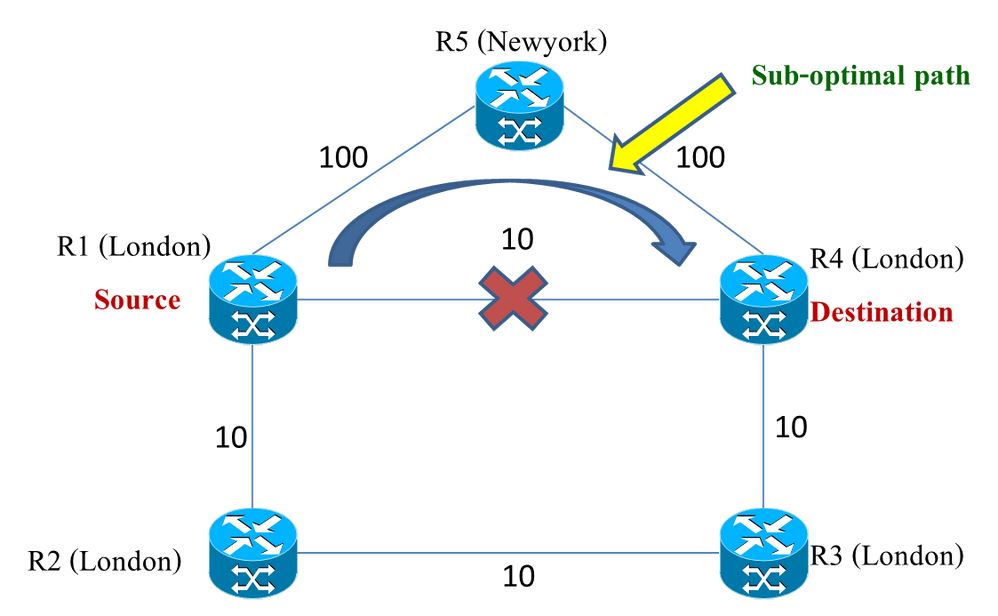 TI-LFA calculates the post-convergence path as backup FRR path. For example in the above scenario, R1 is the point of local repair(PLR). If TI-LFA enabled, TI-LFA has its own algorithm to calculate the backup repair path.

R2 will just execute the instruction of R1 simply. 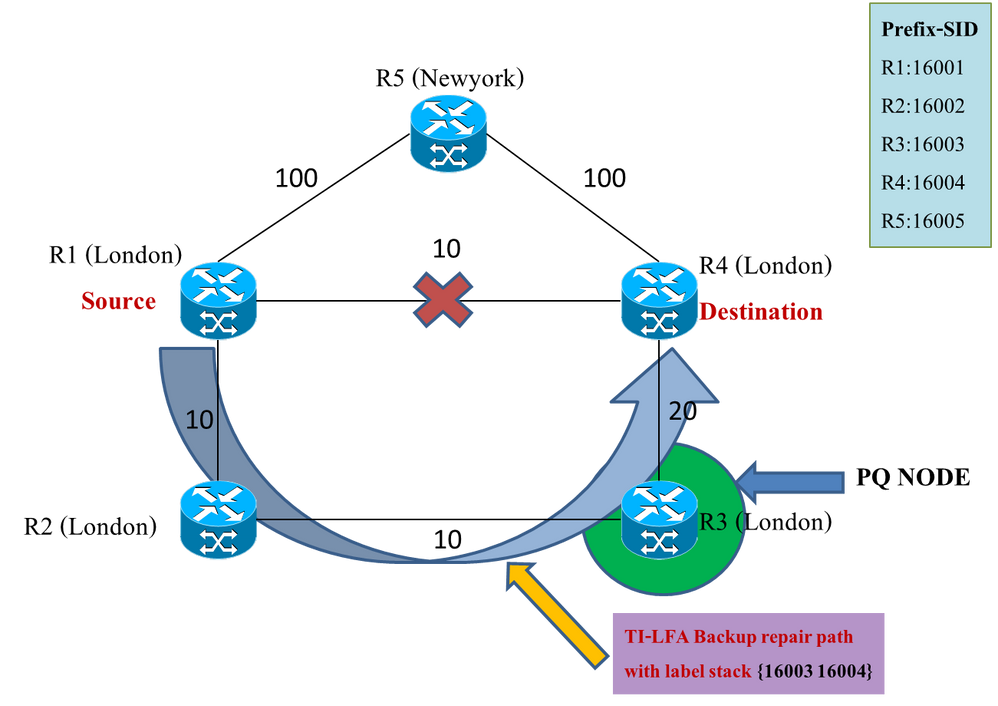 The label stacking will be added in the backup FRR path in such a manner that point of local repair(R1) will stack the PQ node’s label(R3) as top label and then destination Prefix-label (R4’s prefix Label). The Label stack will look like [16003 , 16004].

A simple CLI to enable TI-LFA under IGP interface configuration mode as shown below.

What is PQ Node?

RLFA and TI-LFA will use the terminology such as P space, Q space or PQ node while formulating its own algorithm for LFA repair path.

P SPACE - This defined the set of other routers R1 can reach without traversing over failed link. This requires shortest path tree algorithm (SPT) to be run with root at R1. For example in above topology, P space of R1 would be R2 and R3.

Q SPACE -  This defines the set of routers that can reach R4 without traversing the failed link. This requires an SPT to be run rooted at R4. So Q space of R4 would be R3.

PQ NODE: The router that is in both Extended P-Space and Q-Space is PQ node.

RLFA fails to cover 100% in some scenario like the one shown in below figure. When the direct LFA conditions doesn’t meet for some scenario, RLFA will offer the LFA repair path by forming targeted LDP from PLR. As per the RLFA algorithm, PLR will form a targeted LDP session with PQ node.

What if a situation wherein there is no PQ node as shown below.  In the below scenario, there is no node sharing the common P space and Q Space. There is no 100% coverage by RLFA in this scenario. 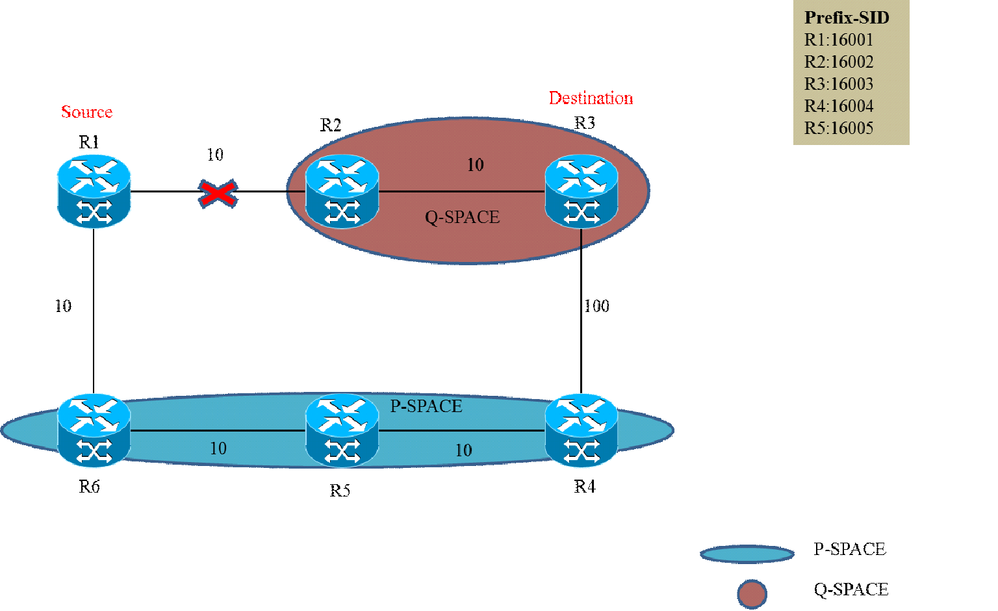 How to fix it: We need a feature that has to send the packet to Q-SPACE during the failure scenario. TI-LFA is the feature that covers this situation. 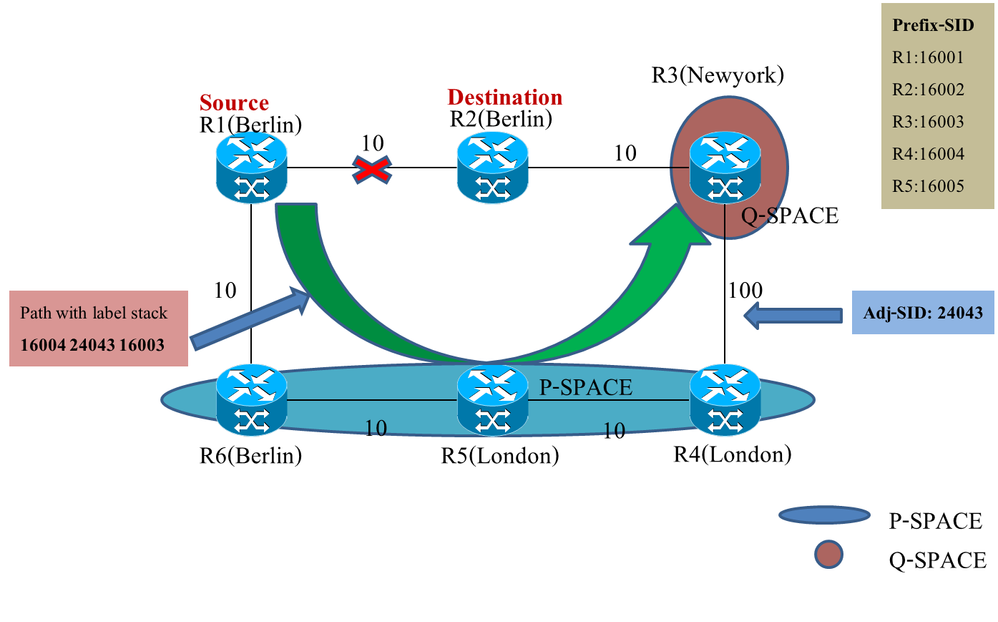 How TI-LFA resolves: As per TI-LFA algorithm it will stack the label which redirects the traffic from P space to Q Space. PLR will stack the prefix-SID of edge node of P space, in our case its R4. Then it will stack adj-SID label between edge router of P and Q space. In our case, it is between R4 and R3. And the last label in stack is the destination prefix.