Cisco Community
English
Register
Login
RegisterLogin
Options
Turn on suggestions
Auto-suggest helps you quickly narrow down your search results by suggesting possible matches as you type.
Showing results for
Search instead for
Did you mean:
Announcements
1041
Views
10
Helpful
2
Replies

The above VLANs will be incremented and counted up. If in Fabric Site1, Cisco DNA Center provisioned VLANs 3001, 3002 then it would start at VLANs 3003 and up for Fabric Site2. These VLANs are not re-used today across different Fabric Sites.

Cisco DNA Center will re-use the VLANs across different Fabric Sites. For example, VLANs 1021 - 1025 are provisioned by Cisco DNAC in Fabric Site1, then in Fabric Site2, it starts provisioning the first IP Pool / Subnet (SVIs) starting from VLANs 1021 and up.

Before I call TAC, or use my get out of jail free card and reach out to my account manager to find help, I figured I’d try posting my query into the community. I’ve had a search through previous posts and have found a couple of questions similar but not exactly what I need, also as DNAC/SDA is an ever changing beast things might have changed.

As part of the long winding journey we’re planning to migrate all L3 functionality from our non-Cisco core network into the Fusion Router/DC/Shared Services setup (different people like different terminology) that for the purposes of simplicity we call the Cisco core.

Simple enough at the two sites within Campus 2, the VLAN IDs on the networks with IP interfaces (in non Cisco speak) fall outside of the 3001-3500 range and have no overlap with 2045 through 2047 if they need to be forwarded out the border to the fusion (I’m not sure they do but belts and braces huh?). This means we can simply forward them to the Cisco ‘core’, create a corresponding SVI, do a little routing jiggery pokery and boom our non-Cisco devices in Campus 2 become dumb L2 distribution devices.

I'm thinking all should be good in Campus 2 and for the networks that that during migration we will need to configure L2 handoff we shouldn’t have any issues plumbing the ‘core’ into the relevant border and forwarding the required VLANs. Whilst the aforementioned VLAN IDs overlap with the  “VLANs 1021 and above ”range that range if I interpret it correctly is only used at the fabric edge and not in the path edge > border?

Below is our current topology diagram with all company identifiable information redacted. 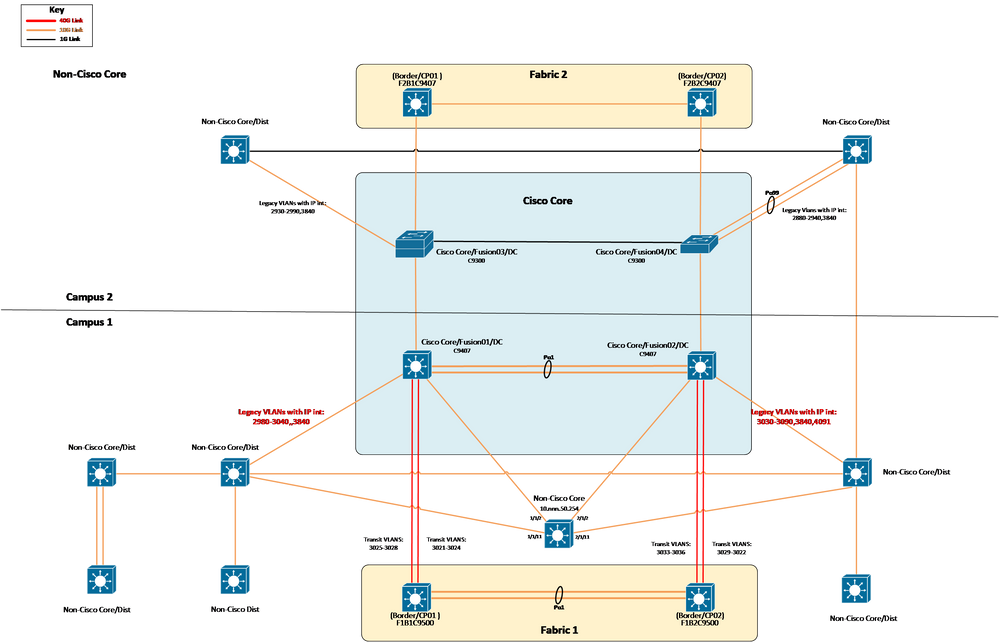 Campus 1 however I think we have challenges if the above rules on VLAN IDs is hard and fast:

Challenge - We have existing networks at two of our sites at Campus 1 that use VLAN IDs in the range 3001 – 3500, more specifically 3001 through 3087.  We already have VLANs in range 3025 through 3036 configured on one or the other Campus 1 ‘core’ devices as Transit VLANs from the Fabric 1 borders which adds a little complexity especially as when it comes to migration these nets in the legacy world would most likely require L2 handoff but they’re only a few of many nets and I think we might have a much larger challenge if we can’t use any of the legacy nets let alone a few.

Labels:
I have this problem too
5 Helpful
Reply
2 REPLIES 2

What version of DNA Center are you running? I’m not sure if you are already aware, but as of DNA Center version 1.3.3.x you can now customise the VLAN IDs that are used for Border L3 handoff. You still have to use VLANs in range 3001-3500, but you can now manually map each VN to a VLAN instead of DNA Center allocating automatically. This should allow you to create your own VLAN design to avoid any clashes on your core and worry about how DNAC manages the allocations. Screenshot below. You still cannot reuse the same Border L3 handoff VLAN IDs between fabric sites so they will need to be unique for Campus 1 and Campus 2. 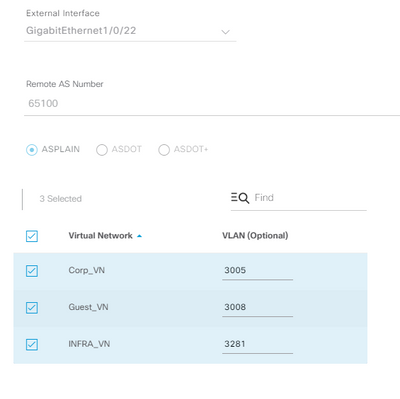 The only challenge that you may still have is with the Layer 2 border handoff, as you cannot map any IP pools to external VLAN IDs 1,1002-1005,2045-2047 and 3000-3500. DNA Center will generate the below error if attempt to do this. Fortunately I have not had a situation where I have needed to migrate any legacy VLANs in these ranges to SDA so I’m not sure what the suggested workaround is. Cisco/another member of the community will need to advise on this. 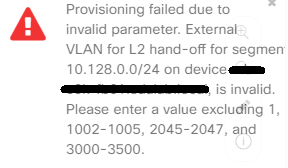 Also you are correct when you state that VLANs 1021+ are only provisioned on the fabric edge nodes so these VLANs, as well as 2045-2047, will not be automated between the fabric borders and your core for IP transit. In addition, as far as I’m aware, if DNA Center has provisioned an IP pool on the fabric edges using a VLAN in range 1021+, such as 1030, you can still map an IP pool to external VLAN 1030 on the L2 border without any conflicts.

One other area to note for L2 border handoff - it is not supported to map the same external VLAN ID on more than one border. For example in your design, you cannot map external VLAN 2930 to border 1 and border 2 in Campus 2. If you need node/link resiliency for the L2 border handoff, the suggested design is to use a dedicated stack with 2 links connected to your core in a port-channel or using STP blocking.

Beginner
In response to willwetherman

Thanks for your great reply :-)

We're running 1.3.3.5, I wasn't aware of being able to customise the VLAN IDs. I'm still very much focused on the build out of the underlay and interop planning so I've not had anywhere near as much time as I'd like to get into the nitty gritty of SDA. In fact we've had to change some of our plans since COVID and use our resources and DNAC to build and monitor a temporary traditional network, all for the right reasons.

The L2 handoff will be our biggest challenge I think, we might have to get creative. I've even been reading about VLAN mapping that was introduced in Cisco IOS XE Gibraltar 16.11.1 as maybe something we might have to explore to sit between our 'source' nets and border for any handoff where the legacy VLAN ID cannot be used. Our implementation partners will love me for asking that question of them at some point I'm sure 😂

Thanks for the reminder of the L2 limitations on border links, I think Cisco have made it that way just to encourage people to not sit in a permanent state of co-existence and also to give techies a valid reason to management that projects have to complete!

I've reached out to our Cisco contacts so if I get anything that I can share I'll be back.

Latest Contents
**New Episode** Cisco Champion Radio: S8|E19: Revolutionizin...
Created by aalesna on 05-10-2021 04:13 PM
0
0
0
0
New release on Emerging Technologies and Incubation Listen: https://smarturl.it/CCRS8E19Follow us: https://twitter.com/CiscoChampion Last year, Cisco created the Emerging Technologies and Incubation organization which is on a mission to rev... view more
Cisco IOS XE Bengaluru 17.5.1a: Enterprise Routing Release U...
Created by Pradeep Chaudhari on 05-09-2021 09:36 AM
0
0
0
0
On 16th April 2021 Cisco recently announced availability of the latest release on the IOS-XE train – IOS-XE Bengaluru 17.5.1a. This is the 2nd one in the Cisco IOS XE Bengaluru release series, IOS XE 17.5.1a unlocks various routing features and ... view more
New to IPv6? Better understand it with this 7-part blog seri...
Created by greghami on 05-06-2021 02:58 PM
0
0
0
0
New to IPv6? Trying to wrap your head around concepts like IPv6 addressing, solicited-node multicast, and just how, exactly, does all this work without ARP? Never fear, Fish Fishburne is here to help with this blog series she wishes had been out there whe... view more
Cisco IOS-XE 17.5.1 Switching Release – What’s new?
Created by ndiwakar on 05-05-2021 09:12 AM
0
0
0
0
Cisco recently announced availability of the latest release on the IOS-XE train – IOS-XE 17.5.1. This is a standard maintenance release supporting Switching, Wireless, SP-Access, Routing as well as IOT (Internet of Things) platforms wi... view more
How to determine a legitimate hardware issue - Support Talks
Created by ciscomoderator on 05-03-2021 01:46 PM
0
5
0
5
Support Talks- How to determine a legitimate hardware issue (Live event -  Thursday 13 May, 2020 at 9:30 am Pacific/ 12:30 pm Eastern / 6:30 pm Paris) This event will place on Thursday 13th, May 13 at 9:30hrs PST  Register today for this Suppor... view more
Create ContentLogin to create content
Question or Discussion
Blog
Document
Project Story
Video
Related Content
Discussions
Blogs
Documents
Events
Videos
Project Gallery
Content for Community-Ad