Turn on suggestions
Auto-suggest helps you quickly narrow down your search results by suggesting possible matches as you type.
Showing results for
Search instead for
Did you mean:
Start a conversation
Options
3761
Views
0
Helpful
23
Replies

Hello and thank you for reading.

This is a new configuration and I need support. I do have TAC support but it has not proven successful.

Please help with the configuration, with the IP space shown, I have last octet available for public space .184, .185, I have drawn the network in question. See picture. 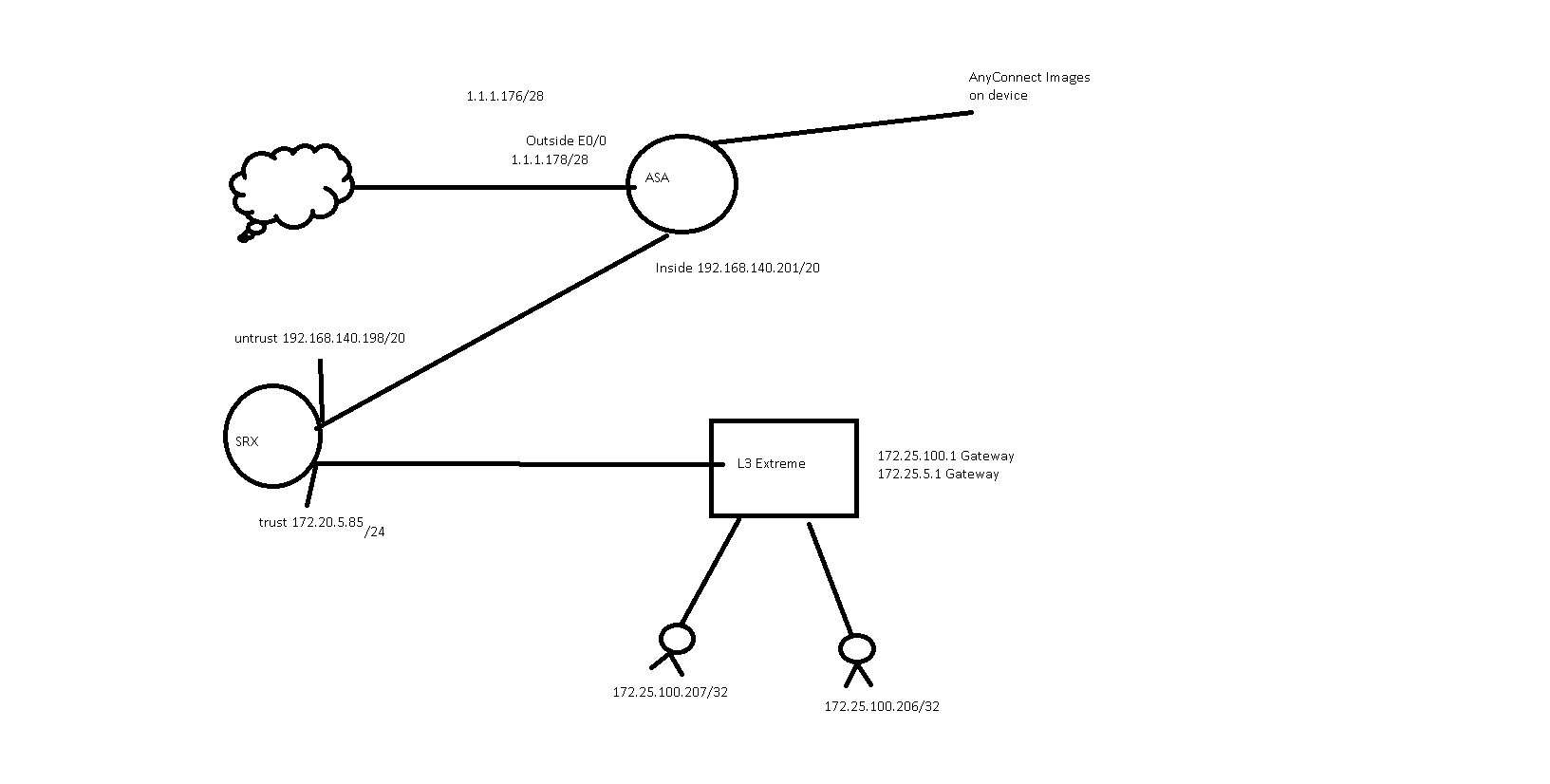 Regarding the certificate, you can browse to your ASA outside interface and, using your browser's certificate inspection ability, download the certificate to your local host. You can then import that certificate into the Trusted root certificate authority (CA) store (or equivalent on non-windows hosts) and it will be trusted for future connections. This may or may not be feasible per the technological savvy of the end users. For that reason and others, most enterprise deployments elect to use a certificate issues by an established CA.

For the domain issue, you need to add your local domain(s) if you want it/them to be prepended to the DNS suffix search list when a VPN connection is established.

What is your goal?

Which clients do you want to be able to have remote access VPN capability? If it's the ones on your diagram, I can't quite figure out the logic behind that.

The goal is to connect from the internet using anyconnect and traverse this network to the individual host IPs using RDP on the bottom of the diagram.

OK. breaking the problem down:

- can you establish a remote access VPN to the ASA from Internet-based clients?

- if they do, we need to look at the inside of the AS onwards through the SRX.

- can the ASA itself reach the target hosts?

- if it can, does the same rule on the SRX that allows that also allow the VPN address pool through from the Untrust to Trust zone?

- can you establish a remote access VPN to the ASA from Internet-based clients?

Yes, however I removed the config

- if they do, we need to look at the inside of the AS onwards through the SRX.

- can the ASA itself reach the target hosts?

- if it can, does the same rule on the SRX that allows that also allow the VPN address pool through from the Untrust to Trust zone?

this is not configured

You replied telling me about the ASA routes. I was talking about the routes that are pushed to the clients when connected via VPN. That will be represented on the ASA as the access-list name that is used under the " split-tunnel-network-list value <access-list name>" called out by "split-tunnel-policy tunnelspecified" in the group policy profile. The clients will see it on AnyConnect as connected routes.

You will need an ASA route to the 172.25.100.0/24 network as well. And likewise those clients need to know how to route out to the set of addresses assigned to the clients in your VPN pool. That will need to be in place (or included in the default route of their gateway).

What should the VPN Pool be? Also the configuration?

Here is where I started.

Should I make a pool that is from the ASA insides interface? Due to the fact that it is a /20 or what do you recommend?

They would if it is an address range of the inside interface.

I tend to define the pool as its own discrete subnet. It can be (even more) confusing when it's carved out of an existing network. Either way will work though as long as they are unique addresses and the places they need to reach know how to route back to them.

Having the routing in place is key to making it work. When the ASA is the default gateway for all outbound traffic (i.e. to anywhere on the Internet or otherwise unknown) it's not an issue as the default will take care of it. If that's not the case then we need to account for it in our routing scheme.

Okay so now that you know my scenario. What does the ASA config look like?

It depends on how you have configured routing on your ASA. If it's all static routes, then you would need something like:

That tells the ASA how to get to the internal hosts.

The L3 Extreme switch and SRX would similarly need routes directing them to the next hop for the VPN pool. The SRX would also need the access policy as I mentioned earlier.

What about the split tunnel?

Your configuration didn't have any split-tunnel-policy so the default is no split tunnel. With that in place, all traffic from the clients flows over the VPN when it is active.

If you need it then you would add the following in the group policy:

Okay thank you. What about the domain name and dns server? I had it listed like this, however when connected the laptop does not get these settings.