Hi
I am,  implemented the network automation by integrating the openstack with the Cisco ACI.

I used it without any problems.
we also used ACI's visibility&troubleshooting capabilities well.

I have confirmed that there is no abnormality in network automation or communication since the upgrade.

However, the ACI's visibility&troubleshooting function does not work.

So I tried to solve the problem through the Cisco TAC case.

However, Cisco TAC responded that integrating ACI&OpenStack did not originally support visibility&troubleshooting. 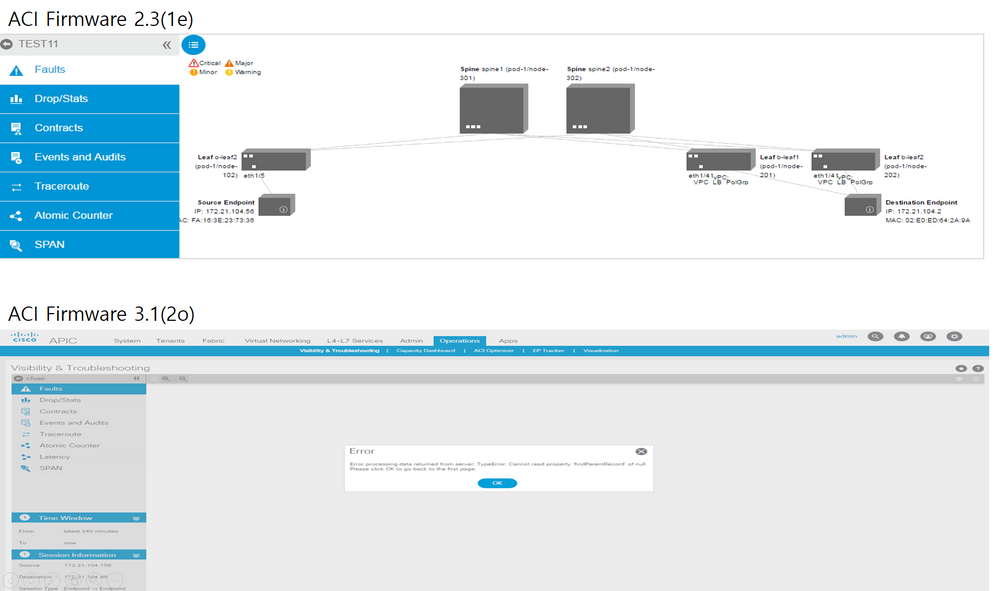 Labels:
Preview file
220 KB
I have this problem too
0 Helpful
Reply
1 REPLY 1

The Modular Layer 2 framework in OpenStack allows integration of networking services based on TypeDrivers, and MechanismDrivers. Common networking type drivers include local, flat, vlan, vxlan, etc. OpFlex is added as a new network type through ML2, with an actual packet encapsulation of either VXLAN or VLAN on the host defined in the OpFlex configuration. A mechanism driver is enabled to communicate networking requirements from the Neutron server(s) to the Cisco APIC cluster. The APIC mechanism driver translates Neutron networking elements such as a network (segment), subnet, router, or external network into APIC constructs within the ACI Policy Model.

The OpFlex ML2 software stack also currently utilizes a modified Open vSwitch Package, and local software agents on each OpenStack compute host that communicate with the Neutron server(s) and OVS. An OpFlex proxy from the ACI leaf switch exchanges policy information with the Agent-OVS instance in each compute host, effectively extending the ACI switch fabric and policy model into the virtual switch. This results in a cohesive system that can apply networking policy anywhere in the combined virtual and physical switching fabric starting from the virtual port where a VM instance attaches to the network.The Figure below illustrates the interaction of the OpFlex ML2 APIC Driver with the ACI Fabric, and the extension of the OpFlex proxy down into the Agent-OVS service on the compute host.