In certain scenarios the Cisco DX80 and DX 70 platforms may emit an RF signal through its microphone or speaker that could carry audio from an active call. A user with the known frequency could configured a specialized RF analyzer and antenna to capture this signal. Cisco has only observed that this signal can be captured from 10-12ft from the device.

An RF signal can also be observed via the speaker of the device.  When playing at 70% of max volume (which would be higher than normal for an individual office using the speaker), RF emissions have been received and demodulated at around 6-10 ft distance of the DX80. Only the DX 80 is affected by the microphone RF signal radiation and not the DX70.

Note: The Cisco Webex Desk Pro or any other Cisco collaboration endpoints are not affected by this issue.

Using a headset via USB to either of the products eliminates the speaker-modulated RF emissions, since the Cisco DX70/80 software stops sending audio output to the speaker in this mode. For DX70 this would be a sufficient workaround for a customer concerned about these RF emissions.  When attaching a USB headset, the microphone on the DX80 remains active and the microphone-modulated RF emissions remain unchanged. The software fix introduced in Cisco bug ID CSCvw28048 allows an administrator to turn off the power to the microphone on DX80s to avoid this unwanted signal to be emitted from the device.

Disabling the Microphone on the Cisco DX 80

Complete the following steps to upgrade the DX 80 and disable the DX 80 microphone.

Step 1: The upgrade is simply done from the web interface under the Maintenance tab. 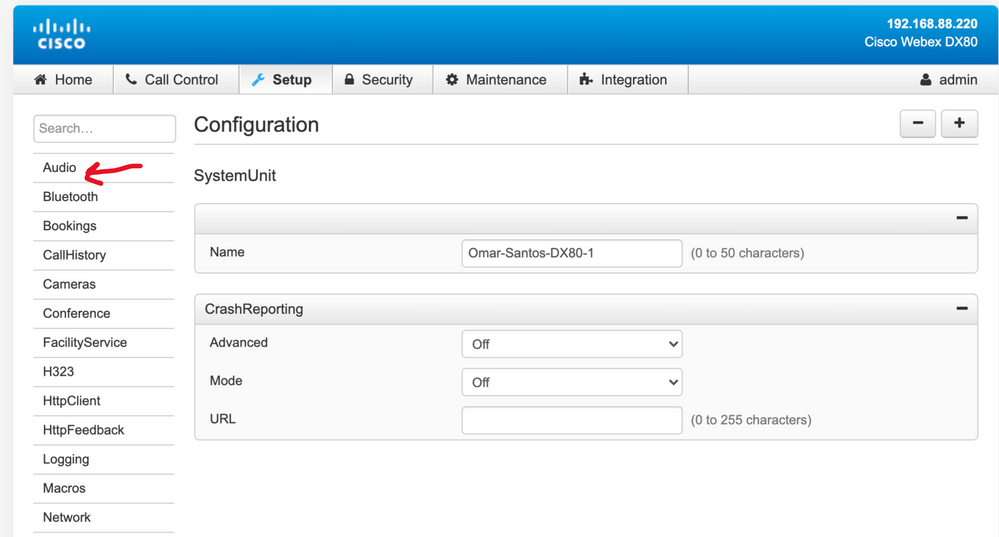 Step 3: Scroll down to Input > Microphone and disable the microphone and turn off PhantomPower, as demonstrated below. 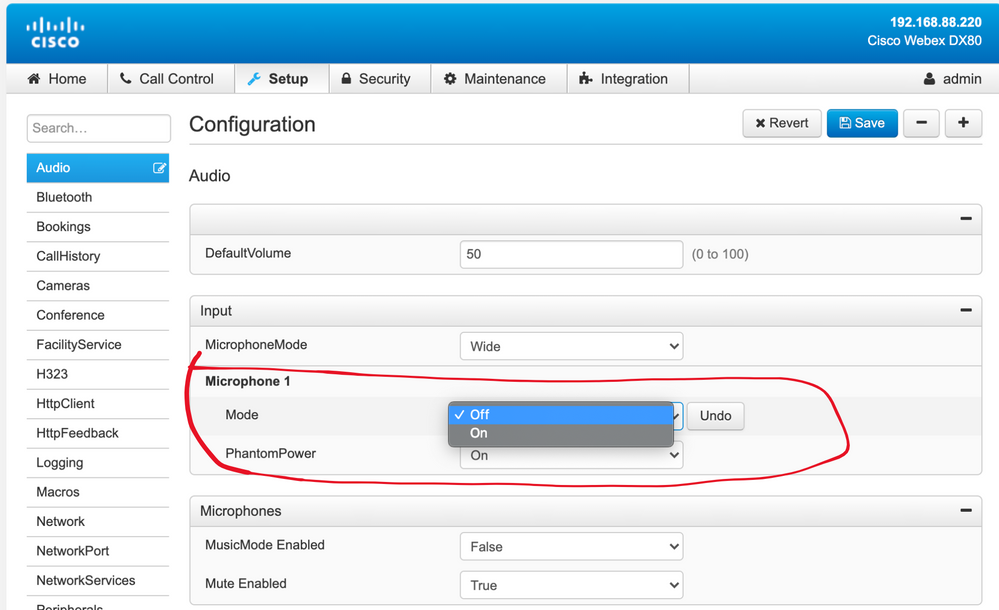 Alternatively, you can login via SSH as admin and execute the following commands:

Note: The settings is still stored in EEPROM, so it will be remembered through a software upgrade. It is very important that you turn the mic back on (xConfiguration Audio Input Microphone 1 PhantomPower: On), before upgrading back to released code (if the microphone needs to be used in the future).

0 Helpful
Share
Latest Contents
While calling a ext number i need to give a promt using cucm
Created by rajaayman on 01-22-2022 04:41 AM
0
0
0
0
HI Team While calling a ext number 2067 i need to issue a promt saying the number is changed call 12234. for this i created  cti route point  as 2067 and assign that to Line group    Image attached LG  and atta... view more
very poor ping response from subscriber servers
Created by VON CLAWSON on 01-21-2022 08:11 PM
0
0
0
0
I have a Publisher and two subscribers. When pinging the two subscribers I am getting very poor response. response times are not bad but the responses are very intermittent. They will be fine for a while and then it will drop 20 - 30 of them. Then go back... view more
Network Settings in progress - retry
Created by VON CLAWSON on 01-21-2022 08:08 PM
0
0
0
0
I have a BE7k C240-M5. firmware 4.0(1) When logging in I am getting an error Network Settings in progress - retry. I clear the error but I see no information in the summary screen.When I goto Admin Networking I get "Unable to communication with ... view more
APNS service can not be configured
Created by fishizza1 on 01-21-2022 04:30 PM
1
0
1
0
We are running  on-premise CUCM 12.0.1.2290011 and trying to enable APNS for jabber clients.  Following the instructions here:  https://www.cisco.com/c/en/us/td/docs/voice_ip_comm/cucm/push_notifications/cucm_b_push-notifications-deplo... view more
CUCM external calls appear connected, but never show connect...
Created by MartinBLack54823 on 01-21-2022 03:08 PM
0
0
0
0
Place an external call from Voip phone 19xxxxxxxxxx, phone does not ring but shows it is on a call, with on call options appearing on soft keys, hold, end call, transfer. person being called never receives call. Internal calls to extensions are fine. can ... view more
Ask a Question
Create
+ Discussion
+ Blog
+ Document
+ Video
+ Project Story
Find more resources
Discussions
Blogs
Events
Videos
Project Gallery
New Community Member Guide
Related support document topics