Here are some commonly asked questions and answers of Distributed Networking deployment for Cisco Application Centric Infrastructure (ACI). Subscribe (how-to) to this post to stay up-to-date with the latest Q&A and recommended Ask the Experts (ATXs) sessions to attend.

What is Cisco ACI Anywhere?

A. Cisco ACI Anywhere solution delivers true hybrid Multi-cloud capability for customers, taking a holistic, policy driven abstraction on top of cloud native APIs , regardless of the type of workload – physical, virtual, or containerized, across on-premises and/or public cloud.

While customers benefit from an ACI policy driven infrastructure in the on-premises environment with Multi-Pod, Remote Leaf and Multi Site Flexibility Architectures.

Cisco Cloud APIC allows them to automate the management of end-to-end connectivity, as well as the agentless enforcement of consistent security policies, for workloads across on-premises and in public clouds through a single pane of glass.

ACI has provided Container Network Interface (CNI) plugin for Kubernetes platforms since release 3.0. Also with the release of ACI 5.0 introduces Cloud CNI which extends capabilities to make containers that are deployed in the cloud and on-prem first class citizens in the ACI network and policy translation. 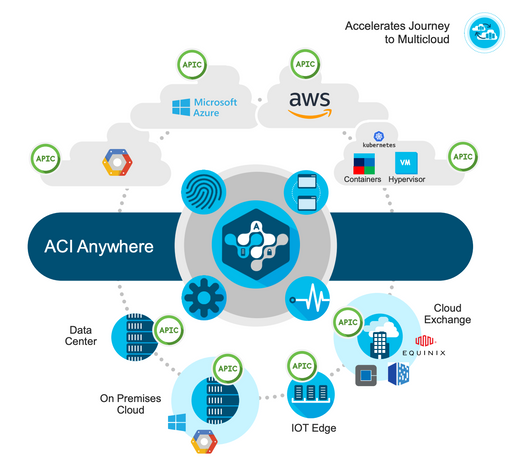 What are ACI connectivity options for managing Primary On-Prem DCs?

What are ACI options for extending your Data center to secondary remote locations (Physical)?

A. Remote Leaf - this gives you the ability to extend your data center to a small site that does not have a controller by placing a physical Nexus 9k leaf switch on site which allows you to connect both virtual machines and bare metal hosts.

ACI Mini - This is something that you may not typically hear about in the context of extending the data center to remote sites. This is a small scale, stand-alone instance of ACI. But let us say in the past you have deployed a stand-alone ACI Mini at one of your Data Centers. You now have       the ability to connect that ACI Mini deployment to larger data centers with the ACI Multi-Site Orchestrator. So it will probably not be your first choice in most cases when it comes to extending an existing data center to a remote site. However, keep it in mind because there could be some technical requirements(bandwidth constraints) that make it the right fit in some solution. 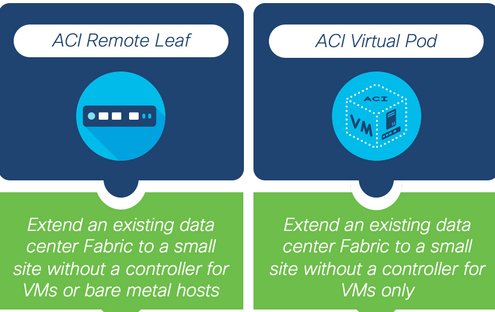 A. The component which does the magic(Policy Translation to Cloud Native constructs) is Cisco Cloud APIC. It plays the equivalent of APIC for a cloud site.

Like APIC for on-premises Cisco ACI sites, a Cloud APIC manages network policies for the cloud site that it is running on AWS and Azure Clouds by using the Cisco ACI network policy model to describe the policy intent.

Cloud APIC is a software-only solution that is deployed using cloud-native instruments such as, for example, Cloud Formation templates on AWS and Azure Resource Manager (ARM) templates on Microsoft Azure. 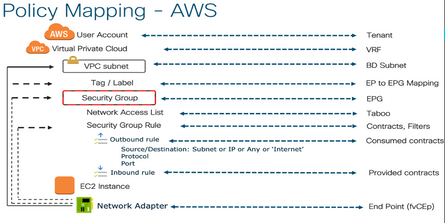 How ACI achieves visibility to Containerized workloads running On-Prem and in Cloud?

A. It's correct to say, if Kubernetes makes individual Docker nodes come together, CNI(Container Network Interface) makes them play together nicely. This it does via bridging the networking gap between Docker nodes.

With ACI CNI Kubernetes or Open Shift Clusters can be configured as a VMM Domain in ACI GUI, managed using OpFlex and OpenFlow protocols.

The Cisco ACI CNI Plugin is supported with the following container solutions:

Leveraging a single abstracted policy model, ACI now allows you to mix and match any type of workloads (including containers) and attach them to an overlay network that is always hardware-optimized on premises while relying on software components in the cloud. The container cloud-networking solution is composed of the ACI CNI and the CSR 1000v virtual router. Whether Kubernetes clusters are running in the cloud or within the datacenter doesn’t matter anymore, they can live in different ACI managed domains without any compromise on agility and security.

This allows network admins to access all relevant container information as well as enables end-to-end visibility from cloud to cloud or cloud to on-prem. It further delivers multi-layer security: at the application layer with the support of Kubernetes Network Policies and container EPG, at the physical network layer using ACI hardware, and in the Cloud by automating native security constructs.

Need more resources? Go to Cisco ACI ATXs Resources for the latest guides, recordings and other FAQs.
Want to learn more and get real-time Cisco expert advice? Register for the upcoming Ask the Experts (ATXs) sessions.
Simply click on the preferred session time to reserve your spot today! Through live Q&A and solution demos, Ask the Experts (ATXs) real-time sessions help you tackle deployment hurdles and learn advanced tips to maximize your use of Cisco technology.
Don’t want to miss any ATXs? Bookmark the IBN ATXs calendar and register for new sessions as they're added, so you can discover more best practices and important tips for your technology.
5 Helpful
Share
Latest Contents
Nexus7706 to Nexus7710 migration
Created by yasir.ilyas on 10-24-2021 09:07 PM
0
0
0
0
Hello, Need migration assistance. I have  double  sided  vpc between POD core(N7706) and multiple Pod  Access  switches(N9ks) and HSRP resides alongwith  STP  primary  on Pod  Core 7706s. I need&nbsp... view more
Is is possible to operate aci app on apic simulator??
Created by oyhskw on 10-24-2021 07:14 PM
0
0
0
0
Hi.. I installed aci simulator (4.26o) on vm. Then, I upload aci app (Citrix_ADCManager) by apic gui. However the installation failed... like below  Could I test ACI app (stateful or stateless) by aci simulator?  is it possib... view more
Issues pushing DCNM template to Nexus 9k switches
Created by CarsonDavis56998 on 10-24-2021 04:36 PM
0
0
0
0
I have just deployed DNCM within a small greenfield DC environment. Thus far , I have been able to discover my switches and have them populate within my inventory of fabric switches. However, when I go in to actually push out my created fabric template I ... view more
DC power supply for 9396px - is UCSC-PSU2V2-930DC supported?
Created by ss1 on 10-24-2021 10:53 AM
1
0
1
0
Hello,I have a couple of DC power supplies for our 9396px switches - UCSC-PSU-930WDC, however, they are now obsolete and the replacement product is UCSC-PSU2V2-930DC.Does anybody know if UCSC-PSU2V2-930DC is compatible with 9396px given the fact... view more
Mixing AC and DC power supplies on 9396px and 9372px
Created by ss1 on 10-24-2021 10:47 AM
1
0
1
0
Hello,I have different power sources for my 9396px and 9372px and I can mix UCSC-PSU-930WDC together with N9K-PAC-650W, however the Cisco documentation does say in bold text that it should not be done. Does anybody have any idea why? Can we damage th... view more
Ask a Question
Create
+ Discussion
+ Blog
+ Document
+ Event
+ Video
+ Project Story
Find more resources
Discussions
Blogs
Events
Videos
Project Gallery
New Community Member Guide