Datacenter design is based on a proven layered approach. The layered approach is the basic foundation of the DC design that seeks to improve scalability, performance, flexibility, resiliency, and maintenance.

This design leverages Cisco's best platforms and best practices that deliver flexible and optimal solutions that can easily scale to a large number of physical or virtual servers. The design is also flexible enough to accommodate network virtualization to separate different customers, while including virtualized network services such as virtual firewalls and virtual server load balancers.

The data center design is based on a three-layer network design model with core, aggregation, and access layers. Each layer has specific requirements and provides different features and functionality. 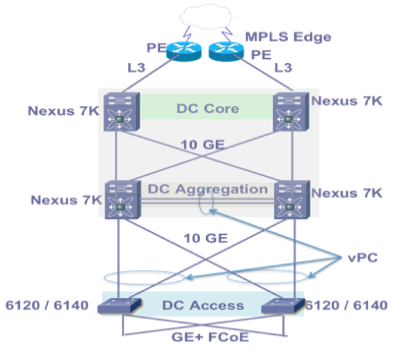 This design employs a pair of redundant Cisco Nexus 7010 switches on the aggregation and core layers. Virtual device contexts (VDCs) of the Nexus 7000 switches are utilized in the design to create a pair of aggregation VDC switches and a pair of core VDC switches from two Nexus 7010 switches. The aggregation VDCs supports Layer 2 multi-pathing to the access layers through virtual port-channels (vPCs). Enterprise VLANs having their Layer 3 termination on the SVI interfaces of the Aggregation VDCs, and Hot-Standby router Protocol (HSRP) is utilized to provide the gateway redundancy for the UC applications hosted in the UCS. The UC application traffic destined to Enterprise Cloud to the HSRP address on the Aggregation Layer VDCs. VRF Lite is used between Nexus 7000 core and aggregation VDCs to enable segmentation of enterprise customers hosted on the common physical infrastructure.

This is the lowest of the three layers of the architecture, where all servers physically attach to the network. The applications run on B-Series blades in UCS 5108 chassis. In other example, real compute and storage resources attach to the access layer. Generally, this is completely an L2 domain which can have L3 connectivity to limit the broadcast domains. When using L3 at the access layer, it is difficult to use various high availability (HA) features such as VMware HA, NIC teaming, and so on because of IP addressing requirements. It is recommended to use only L2 at the access layer.

At the access layer, connectivity to the SAN must also be considered. The storage path can use Ethernet or Fibre Channel (FC) interfaces. FC interfaces consist of 1/2/4GBps interfaces and connect to a SAN switch, Cisco MDS platform. The back-end high-speed fabric and storage path (10 GE) can also be a common transport medium when IP over Ethernet is used to access storage. In this design SAN is the only recommended storage networking which requires the FC connectivity.

When using UCS 5108 chassis for server connectivity, it is essential to use the Fabric Interconnect 6100. Without the 6100 FI, the fabric extenders on the UCS 5108 chassis cannot be configured and there is no connectivity between the UCS 5108 and the access layer. The FI at the access layer acts as a host switch for the UCS 5108 server chassis; it does not provide any routing capabilities. The connectivity between the access layer switches and the UCS server chassis is based on 10 Gbps Fibre channel over Ethernet (FCoE) links, which carry Ethernet data traffic and FC storage traffic. You should perform some traffic engineering on these links. The storage traffic can cause slow responses for real application data traffic.

Thanks for the great piece of info, though it is very helpful to learn DC dynamics.

Good info. I have a question. Since you are using the same physical device (but logically separate using VDCs) in Core and Aggregation layer, is it treated as 3-Tier architecture or collapsed core architecture?

So, even though VDCs are used, the contexts should still be considered separate devices from an network architecture perspective.

Beginner
Hi Sandeep, Can you please check it out my question and let me know if its possible or not please? its at https://community.cisco.com/t5/data-center-switches/can-i-use-vpc-between-core-and-aggregation-layer-switches/td-p/3790748 Thanks Dee
Latest Contents
HSRP with Nexus VPC
Created by AdamDownie12 on 05-13-2021 02:57 PM
0
0
0
0
Hello,We have a slightly odd design, which is just in place for a temporary amount of time during a migration. Diagram below.   The issue we are seeing is that some virtual machines connected to the access switch in vlan 10 are unable to ac... view more
6506-E with X6748-SFP
Created by chad.langlois on 05-13-2021 10:05 AM
0
0
0
0
We currently have a 6506-E with a fan tray, 2 3000W power supplies, 3 X6748-SFP line cards and a SUP720 running IOS 12.2 IP Services, which works. We would like to upgrade to the SUP 6T which is running 15.3 IOS IP Services, but when we tried it denies po... view more
Switch Model Comparison 9348GC-FXP Versus 9348GC-FXP-OR
Created by us10610 on 05-12-2021 01:46 PM
0
0
0
0
I've been struggling to find a clean comparison between these two switch models, I suspect that the OR model does not support 10G-baseT but I haven't been able to find a data sheet to confirm.  Anybody know what the OR designation represents (li... view more
How do I locate battery information for a Catalyst 9500?
Created by wadetg on 05-12-2021 12:27 PM
0
0
0
0
I am looking for the battery information required for shipping a Cisco 9500 switch. If it contains a battery, I need to know the type (Lithium rechargeable or non-rechargeable, NiMh, Wet, NiCd, Alkaline or Button Cell).
BD - EPG communicate with other EPGs
Created by jmaurer101 on 05-12-2021 10:49 AM
1
0
1
0
I'm new to ACI so please forgive me. I have multiple BD EPGs that are connected and have subnets. Inside the subnets I can ping everyone. But I would like to have EPG 1 reach EPG 2. They are in the same VRF.  Typical routing is placing stat... view more
Create ContentLogin to create content
Question or Discussion
Blog
Document
Project Story
Video
Related Content
Discussions
Blogs
Events
Videos
Project Gallery
Content for Community-Ad