Migration Tool Predefined Reference Data Will Not Be Imported

During exporting procedure I got 962 objects of Predefined Reference Data from ACS 5.6 to ISE 3.0 or to 2.7.

During importing procedure I got message "Will Not Be Imported".

See attached pictures. I have tried in 2 version of ISE 3.0 and to second appliance version 2.7. The same result is in place.

What does it mean or why those objects will not be imported ?

Is it correct that "Predefined Reference Data" is not imported at all ?

In import report file there is any explanation why it will not be imported at all.

I went through documentation and I did not found how it can happen or why. I saw some videos, where 1 or more objects were imported, but not situation where is "Will Not Be Imported". 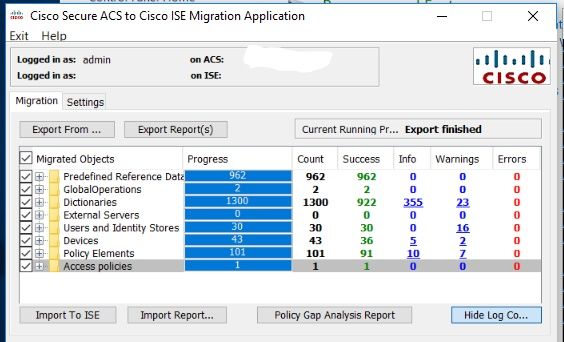 Should I concern about quality of imported data ?

How did you get on with this process? I think in some cases it might just be cleaner to extract whatever you can from ACS (e.g. device groups and devices, and local identities) and then rebuild the ISE system from scratch. Get a clean perspective and rebuild the logic using the ISE Policy Set. I think a human would do a better job than a migration tool because we can see inefficiencies.

The export/import is useful though - I did a lot of exporting from ACS itself and then massaged the data into the correct .csv to import into ISE. Perhaps the Migration Tool can also do that.

The Progress bar shows “Will not be Imported” for Predefined Reference Data because ISE already has these objects built-in.