Cisco Community
English
Register
Login
Make a difference. Your participation will help fund Save the Children. LEARN MORE
RegisterLogin
Options
Turn on suggestions
Auto-suggest helps you quickly narrow down your search results by suggesting possible matches as you type.
Showing results for
Search instead for
Did you mean:
3294
Views
1
Helpful
3
Replies

DHCP config: assign fixed IP to one device while assigning others from a pool

We have a small range that we want to assign via DHCP to devices; .200 through .220 . At the same time, we have a handful of Macintosh systems to which we want to assign a specific address that is not in that 200-220 range. I don't want to configure the assignment based on the Ethernet MAC addresses because these systems might connect via UTP or wireless; that is to say, they have more than one MAC address. They only ever connect using one interface/MAC address at a time, but it's their choice; in some areas wi-fi is available, and in some areas they have to cable-up.

The Mac OSX network settings has a field for "DHCP Client ID". It would be much easier to tell the users of these systems to put their Mac's name in the Client ID field for both their wired and wireless DHCP configs. (As opposed to having them all lookup, and then give me their Ethernet MAC addresses for both of their interfaces.) 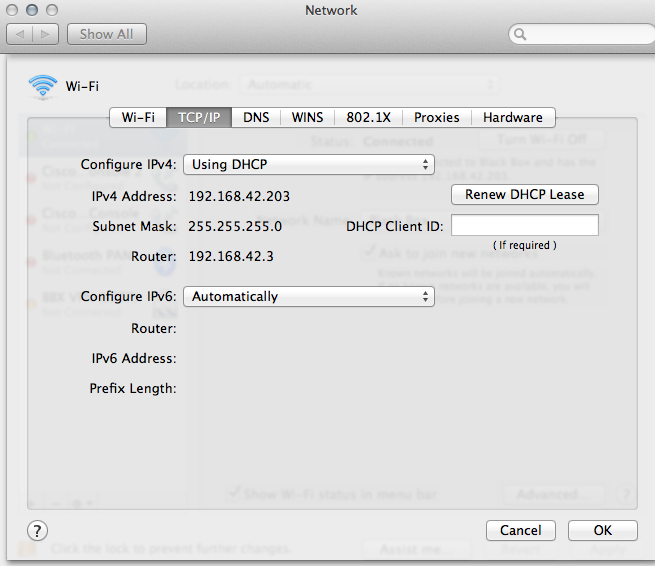 Here's the DHCP-related config from the router:

Is "client-name" the wrong place to configure the DHCP Client ID? ...or am I doing something else wrong?

Try changing the client-name to client-identifier and use the mac address associated to the workstation that you want to statically assign. You'll also want to put all of your other information in that pool though like dns, default gw, etc.

Beginner
In response to John Blakley

...I specifically don't want to have to code the MAC ethernet addresses in the router's config.

My goal is to configure in the router something fixed -- like a persons name, or a name/label for their Mac. Then they just use that to ensure they get "their" IP address. Then I only have to manage add/remove of people (very rare.) rather than add/remove of physical devices (these are mac laptops) and people get new ones a lot. And each Mac has two (wifi and wired) mac addresses.

Beginner
In response to cconstantine

I opened a TAC case and they figured this out in short order. I'm typing it up here for posterity.

It is correctly passed in the DHCP DISCOVERY packet in the Client-ID option. If you set it to "bob" and sniff the packet you'll see "Client-ID Option 61, length 3: "bob" (captured via tcpdump.)

2) The "client-identifier" configuration command in IOS

IOS (ref version info in first msg!) compares against the discovery packet literally. The packet's option value is hex encoded. So it's not