Cisco Community
English
Register
Login
RegisterLogin
Options
Turn on suggestions
Auto-suggest helps you quickly narrow down your search results by suggesting possible matches as you type.
Showing results for
Search instead for
Did you mean:
530
Views
5
Helpful
4
Replies
Highlighted

I am not so familiar with Cisco Prime, however I want to take use of the image deployment that Cisco Prime has.

1. I am trying to downgrade C9200-48P from version 17.x.x to 16.12.4 - however Prime won't distribute the image because it says "not recommended version" - can I force the distribution somehow anyways? As 16.12.4 is the current recommended. I believe Prime just checks for version numbers instead of checking Cisco Suggested image on software.cisco.com

2. ROMMON images. How do I distribute a ROMMON upgrade image? I uploaded the ROMMON file to Prime, however when trying to distribute it, it does not show up?

3. Can I initiate FTP, TFTP from network devices towards Cisco Prime to solve question 1+2? Instead of Prime doing the initiation, to the network devices, a switch/router could initiate a copy.
For example:
#switch copy ftp://<prime_ip_addr>/ROMMON_FILE.PKG  flash:

1) If there isn't any force-distribution flag , not possible and or in that case you have to do the downgrade-thing manually

3) Not possible , in fact that would defy the  'total purpose' of Prime

1) If there isn't any force-distribution flag , not possible and or in that case you have to do the downgrade-thing manually

3) Not possible , in fact that would defy the  'total purpose' of Prime

Beginner
In response to marce1000

Thank you marce1000, for your valuable input.

Regarding to my third question, I mean, yes it would defy the purpose of Prime, but it seems that Prime is missing vital components to be a center of software mangement. Without the possibility to distribute a given software, because Prime just compares which version has the highest number, it really limits its use then. What if I have a bug and need to downgrade? It's not possible. I should be able to distribute any given image, and do the activation/unpacking manually then. Also being able to distribute ROMMON images would be nice, even if I have to do the activation/installation manually. Regarding network devices possibility of initiation towards Prime, has a great use case for me in this instance, I would not need to install a separate server, which just serves as a SCP, SFTP, FTP, TFTP server, why not have Prime doing it all?

Anyways, thank you for the input

With respect to #3, you can use Prime as a general tftp server.  You can copy whatever file you want to distribute to Prime - the easiest way is to tftp the file to Prime. Then you can have the switches copy from Prime via tftp.  When doing this, the files will live on Prime in the /localdisk/tftp folder.

Beginner
In response to daquinla

What is the full path I need to specify to download this rommon image as an example from a router/switch. 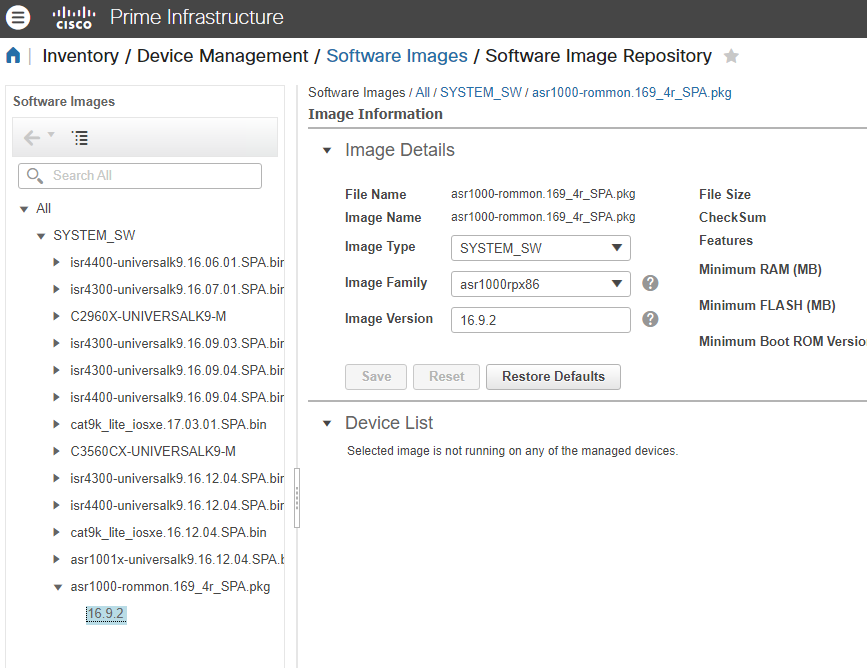 Latest Contents
Building AAR policies
Created by networkhelp1 on 11-24-2020 09:54 AM
0
0
0
0
We are building out our first few AAR polices and are running into an error message.Built Global Policy with SLA class and traffic rules for voice traffic, attached to to the sites and VPN we needed, no issue. Building a second policy for management ... view more
Cisco Champion Radio: S7|E45 Network Insights with AI Endpoi...
Created by aalesna on 11-23-2020 05:10 PM
0
0
0
0
Cisco Champion Radio · S7|E45 Network Insights with AI Endpoint Analytics Identifying who and what is on the network is a challenge for many organizations. Incomplete visibility makes it difficult to implement advanced security policies and recommendatio... view more
Load Sharing When Dual-Homed to One ISP Through Multiple Loc...
Created by xshant on 11-23-2020 03:54 PM
0
0
0
0
HI, In the attached diagram from cisco site if we assume R101 and R102 are two DC having a layer 2 link and both are advertising same subnet (eg. 192.168.12.0/24) to the ISP i understand by using BGP metrics we can make one DC primary and other as se... view more
Issues pullling DHCP from a Tier 1 ISP network.
Created by InSpaceDude on 11-22-2020 11:57 PM
0
5
0
5
Question I am having trouble pulling DHCP from a given network. I am fairly new at DHCP servers and I am trying to understand how IP addresses work within these servers. The objective is to give DHCP to my 6 PC's on my main network. I can either... view more
Packet tracer keep crashing when opening pkt file (windows 1...
Created by Lar1416 on 11-22-2020 10:47 AM
4
0
4
0
Hello, I was doing a packet tracer lab. Everything was fine, working, then suddenly it freezed. I closed the window. Now everytime I open this file, it freezes. I uninstalled it and reinstall, still the same. Tried with an older version, keeps crashi... view more
CreatePlease login to create content
Discussion
Blog
Document
Project
Video
Related Content
Discussions
Blogs
Documents
Events
Videos
Projects
Content for Community-Ad