Turn on suggestions
Auto-suggest helps you quickly narrow down your search results by suggesting possible matches as you type.
Showing results for
Search instead for
Did you mean:
Start a conversation
Options
1712
Views
5
Helpful
9
Replies

ASA 5506-X getting ip from ISP but no DNS servers, also can't connect to outside

Also this network is gonna be a little difficult for a starter, so I'm trying my best to explain it with a picture. 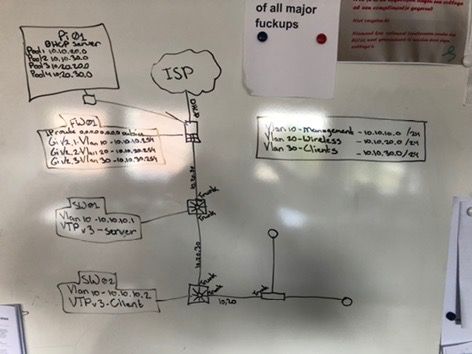 int gi1/1 - outside interface - dynamic IP - does get an IP address assigned from the DHCP of the ISP, but no DNS servers.

So let me first focus on this part. The WLC and APs aren't important at the moment.

I've got 2 layer 3 switches, but they run as a layer 2. I put them both in Vlan 10 to assign an IP address so they are reachable with SSH later. Lets be honest, putting that console cable in everytime gets annoying :).

So it works to outside from the ASA, but when I ping 8.8.8.8 on the client it doesn't go through, also an issue with the ASA config. I'll put the config in another comment.

- ASA isn't getting the ISP assigned DNS servers, but does get an IP address from the ISP DHCP server.

- From the inside network I can ping the gateway but I can't ping further than the gateway.

Ok, looks like you have no ACL to permit ICMP replies. 2 options, ACL or MPF

ps. if you see anything else that could be adjusted in this config for best practice please let me know

Is there actually no one that can help?

Hi,
What is the output of "show nat", it could be traffic is unintentially natted behind "nat (any,any) source static any any". Upload the output so we can confirm the hit counts on the rules.

Remove the first nat rule "no nat (any,any) source static any any" traffic should then start to hit the dynamic nat rules you've already got defined.

Post the output of "show nat" and a packet-tracer output if this does not work. E.g-

ping request to any ip that's not in the same subnet gets timed out.

Here is the packet-tracer, which shows it's allowed, but doesn't seem like it actually is.

And here is the show NAT

Ok, looks like you have no ACL to permit ICMP replies. 2 options, ACL or MPF

Thanks for your quick responses!

Now it says it failed.