Turn on suggestions
Auto-suggest helps you quickly narrow down your search results by suggesting possible matches as you type.
Showing results for
Search instead for
Did you mean:
Start a conversation
Options
1417
Views
0
Helpful
5
Replies

ASA - Routing Outside with Sub-Interfaces

I'm attempting to use an ASA to route two VLANs to an outside interface that uses NAT/Port Forwarding on the outside IP to access several servers within one of the aforementioned VLANs. The following diagram shows the topology. 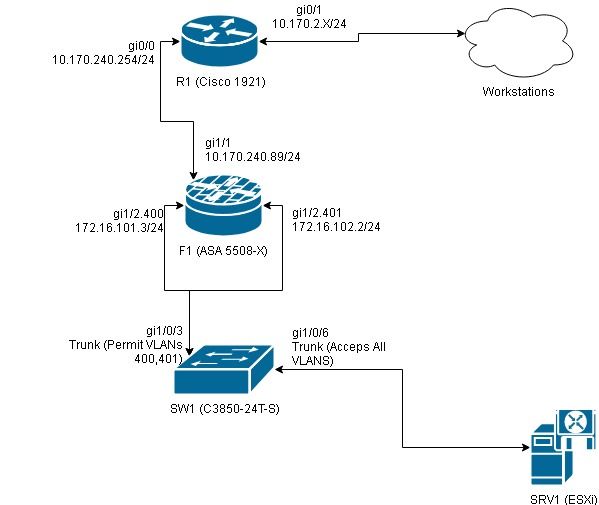 The router is only here for testing purposes. On deployment, I'll simply have a gateway IP. I realise it adds some complexity, but the router is already configured for the test and works.

The ASA is where I'm stumped at. From the gi1/1 interface, I can ping the router on the gi0/0 interface. However, if I attempt to ping either of the sub-interfaces, or the server below the firewall, I can't access it. The ASA logs are showing that the ICMP packets are coming in, but it's as if they disappear afterward. I ultimately need other traffic other than ICMP to flow, but for now I can't manage to get this through.

It's unclear if the problem is with NAT, ACLs or I'm just doing something stupid that I shouldn't be doing. Here's a portion of the config on the ASA:

Any advice here would be greatly appreciated. 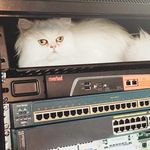 Hi There,
When you say you can't ping either of the ASA sub interfaces or the server behind the ASA, where are you sourcing / initiating the ping from?
Also, the server, what ip / vlan is its GW?
0 Helpful
Share
Reply

Beginner
In response to GRANT3779
Options

Let's take the issues one at a time.

When you have laptop hanging off R1, I'm assuming you can hit the R1 interface / GW and that the path up to the ASA outside interface is OK from perspective of the laptop.

On the firewall itself, to be able to ping through it you need to first ensure you are inspecting icmp. Do you have the following configured on the ASA? If not, add the inspect icmp command under global policy, like below.

If you now send icmp traffic from laptop to server, the ASA will keep track of that traffic traffic. That should be the path from laptop to server sorted, however now focus on the return path from server. The return traffic will hit the ASA but looks like it is going to get NAT'd to the ASA Outside interface before being sent out. Is this what you want? For testing you may want to remove those NATs and then maybe look at adding a static NAT for the server once you prove connectivity.

As for not being able to ping the sub interfaces. If you were trying to do this whilst coming in from the Outside then this is not possible by design. You cannot ping another ASA interface IP whilst coming in via a different interface.

Also, since your icmp traffic is coming from the Outside you will need an ACL allowing the traffic on the outside interface. This is because you cannot go from a lower security level to higher security level interface unless permitted via ACL.
0 Helpful
Share
Reply

One last thing does the ASA have a route back to the 10.170.2.x/24 network? Pointing up to the router.
0 Helpful
Share
Reply