Welcome to the new Cisco Community. LEARN MORE about the updates and what is coming.
Turn on suggestions
Auto-suggest helps you quickly narrow down your search results by suggesting possible matches as you type.
Showing results for
Search instead for
Did you mean:
Start a conversation
Options
3595
Views
8
Helpful
9
Replies

Hi, this might be a basic question but I would appreciate any help at all.

I have an ASA 5510 with SSM-10 module. Firewall all working fine, still haven't managed to log in to the IPS module, I keep getting the error

I believe the username + pw will be the default cisco pw (they should be, I have gone to Tools > IPS password reset). I just want to verify what would the IP address of the IPS module be? [I have previously changed my management port to 192.168.2.1].

Also where exactly should the SSM-10 ethernet port be connected to, physically? The management port or a switch on my LAN? Or do I activate one of the spare interfaces & connect it to one of those? Sorry just a bit confused. 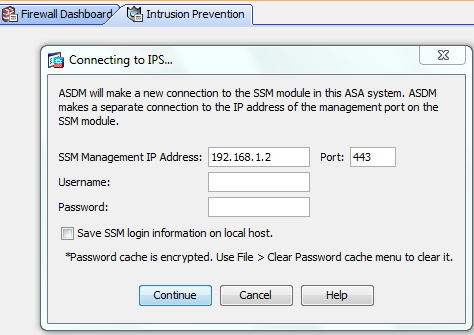 Hello . 1 st you need to connect interface on IPS (Management only) to your switch and have proper routing if it uses different subnet (other than ur LAN)

2. to identify the ip address do following

ASA# show module 1 detail --- it will show all configuration

Thanks very much for your reply, CLI entries below:

Getting details from the Service Module, please wait...

Result of the command: "session 1"

It sounds like your AIP-SSM is sick. It shouldn't reject a "session 1" connection via the backplane (ASA's CLI).

Check the status of your AIP-SSM with a "show module 1" from the ASA CLI. It should look similar to what's shown below. If the module status is not "Up", you can reset, reload, recover or reimage it.

Beginner
In response to rebelscum
Options

the only way to change the IP address is to login to the IPS module.

If you IPS show all UP

or just reimage the ips

I did finally manage to run a 'session 1' via putty, & if I then run 'setup' which takes me through the setup process.

I ran a show module 1 (below), which I think looks ok.

Result of the command: "show module 1"

In SSH, when I 1st log in, I get this license notice, is that relevant?

There is no license key installed on the SSM-IPS10.

The system will continue to operate with the currently installed

signature set.  A valid license must be obtained in order to apply

to obtain a new license or install a license.

Your "sh mod 1" looks good. It's also a good sign that you can get into your sensor via "session 1".

The ACL you entered in setup is the allowed hosts, and if you included the subnet that your ASA M0/0 interface is on, you should be good. (at this point, you could also leave the ACL empty and accept ALL incoming ssh sessions).

Since your sensor appears to be responding properly (you were able to run the "setup" command), you should check your networking connections next:

Do you have an Ethernet cable plugged into the AIP-SSM Ethernet port?

Can you ping the gateway from the AIP-SSM sensor CLI?

Beginner
In response to rhermes
Options

Yes I have a standard ethernet cable connecting the AIP-SSM ethernet port to a port on our std Cisco LAN switch.

There's various settings in the SSM 'setup' under Advanced which I have left untouched, does this look right?

Your SSM setup looks correct, but your problem is the lack of network connectivity form the Management port (Gi0/0) on your AIP-SSM module. Track down why you can't ping your gateway address from the AIP-SSM.

Does the interface show as "up" in the AIP-SSM CLI (sh int) and your switch?

Does your switch have the correct MAC address entry for the AIP-SSM interface on the switch port? Is it in the correct VLAN?

Do you have a duplicate IP address on your network?

Beginner
In response to rhermes
Options

thanks very much for your advice Bob, my 'sh int' entry below is showing 'link status = up', as far as I'm aware our switches didn't have any special port configuration but its something I'll need to look into (they are SRW2024s).