Welcome to the new Cisco Community. LEARN MORE about the updates and what is coming.
Turn on suggestions
Auto-suggest helps you quickly narrow down your search results by suggesting possible matches as you type.
Showing results for
Search instead for
Did you mean:
Start a conversation
Options
763
Views
10
Helpful
4
Replies

Hi, I'm trying to set up PBR (Route Maps) on FTD managed by FDM but I'm finding it impossible, on ASA it would look something like this

Please make sure you are running version 6.6 or higher in the FDM and the syntax is the same as ASA.

I am in fact running version 6.6.4, I managed to partially get it to work using a workaround to configure bgp-set-clause to set the next hop as there is a bug which does not let you configure set clause when creating the Route Map in SmartCLI (I have attached a screenshot on how I've set it up. 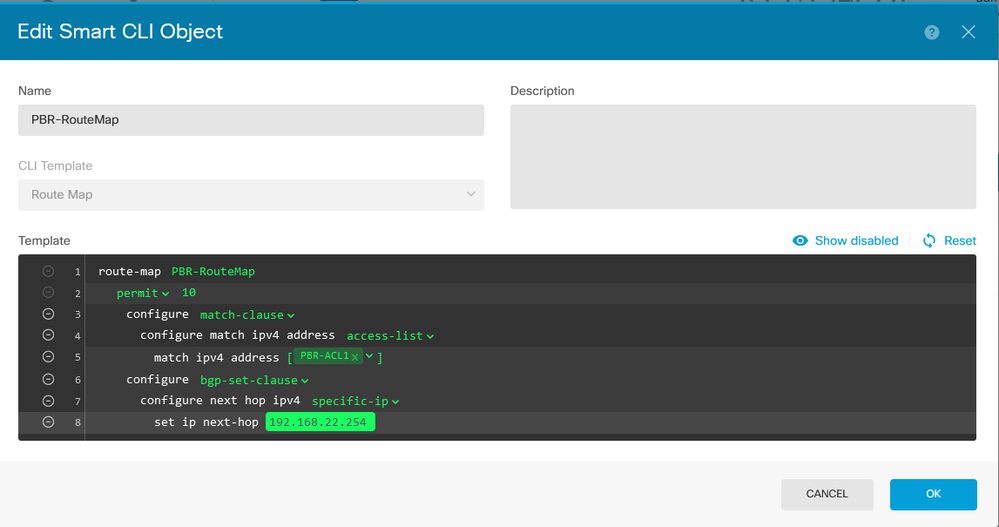 With the above I can confirm that it works however I have an issue that I have no failover for PBR, on an ASA I would have used the following commands:

which would have enabled failover for PBR using a SLA monitor.

I was so excited to move from ASA to FTD but it seems that the product has so much less features.

Beginner
In response to wcutajar
Options

Can you share the steps how you applied this route-map to the interface?

Without knowing the steps you are taking to create the route-map, we can only provide information on how a route-map is created using FDM.  Check the following link