Would you be so kind to advise on the following. We are trying to deploy our FTDs in as a cluster in a transparent mode. The intention is to have TWO BVIs configured on them to run dynamic routing protocols over these BVI to establish EIGRP adjacency between Layer 3 devices that sit on eaither end of a transparent FW. The diagram looks like this 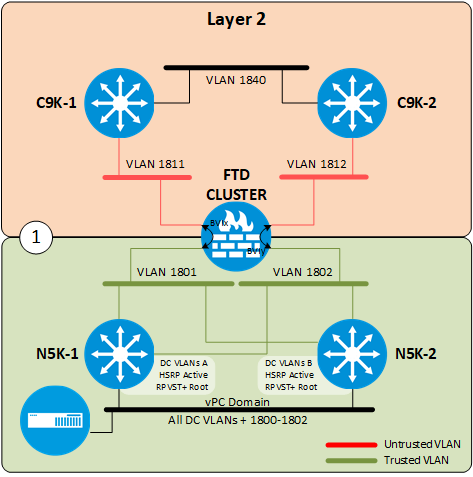 For the avoidance of doubts

All good, with exception that BVIy has to look WORSE from a routing perspective (that is, adjusted delay on C9K and N5Ks on SVIs that are bridged via BVIy - SVI1802 and SVI1812 delay 100). These are two separate bridge groups. Packet that entered N5K-1 via BVIx has to leave via BVIx. Without tuning the metric to make one BVI passive, it can be returned via BVIy and FTD will drop it as it expects it on BVIx

P.S. I hope my intentions are clear :)

Latest Contents
CCIE Security in a Remote and Cloud Driven Network: SASE and...
Created by ciscomoderator on 04-22-2021 05:41 PM
0
0
0
0
Meet the Authors Event - CCIE Security in a Remote and Cloud Driven Network: SASE and Beyond (Live event – Thursday, 29th, 2021 at 10:00 a.m. Pacific / 1:00 p.m. Eastern / 7:00 p.m. Paris) This event will have place on Thursday 29th, April 2021 at 10... view more
Cisco and Radware - Securing your digital future
Created by Kelli Glass on 04-21-2021 05:16 PM
0
0
0
0
Application Protection, Availability & Security Join our webinar May 6th to gain valuable industry insights into the most recent application cyber attacks and to understand the potential impact bot traffic is having on your business. Lear... view more
Cisco Wants your Feedback on the Secure Firewall Management ...
Created by caiharve on 04-21-2021 04:36 PM
0
0
0
0
Review the Cisco Secure Firewall Management Center (formally named "Firepower Management Center") on TrustRadius and receive a $25 gift card!
ISE as RADIUS server for Password + Smart Card Authenticatio...
Created by deepuvarghese1 on 04-17-2021 06:22 AM
1
10
1
10
The purpose of this document is to demonstrate how ISE authenticate / authorize a user that uses a smart card (PIN + Certificate) and password mechanism to login their system. This document describes the components used for this setup, configuration of IS... view more
Email Security - QuoVadis Root Certificate Decommission Migh...
Created by dmccabej on 03-30-2021 09:32 AM
0
0
0
0
Problem Description For all versions of the Email Security Appliance (ESA) and Security Management Appliance (SMA), some Secure Sockets Link (SSL) certificates issued from the QuoVadis root certificate authority (CA) trust chain before 2021-03-31 cannot b... view more
Create ContentLogin to create content
Question or Discussion
Blog
Document
Project Story
Video
Related Content
Discussions
Blogs
Documents
Events
Videos
Project Gallery
Content for Community-Ad