Rome was not built in a day, and neither was a complete reference implementation of the MEF's LSO architecture. However, at the Euro16 Hackathon in Rome last week, a group of talented developers made great progress in that direction. For those not intimately familiar with MEF, the LSO architecture, or the corresponding open source initiatives, here is a bit of background. 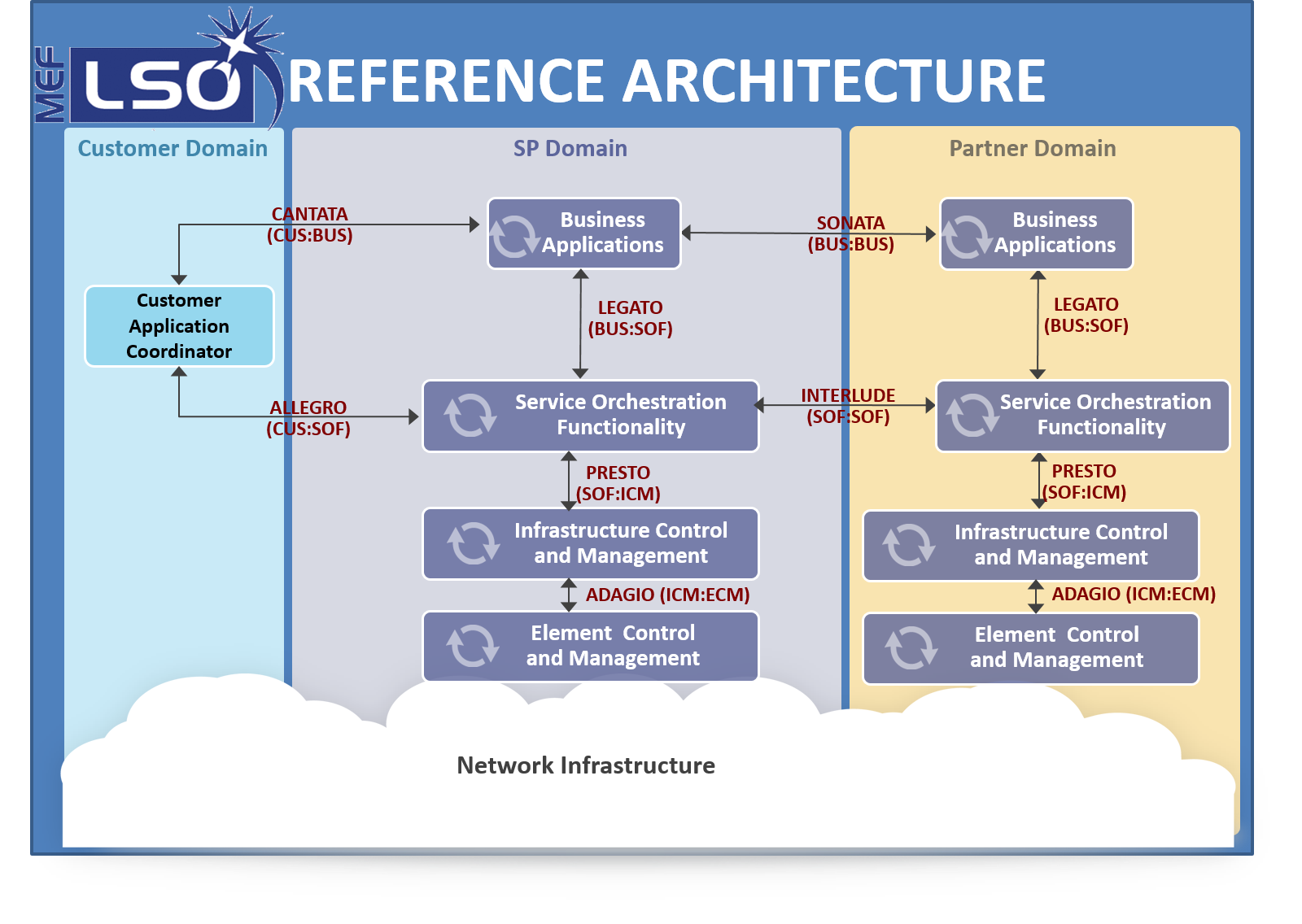 MEF refers to the network powered by LSO as the “Third Network". The Third Network is a revolution in service provider networking. It combines Internet agility and ubiquity with service assurance, offers unprecedented levels of user control of the network, and delivers dynamic, on-demand service experience. It is expected that other SDOs will implement parts of this architecture. Toward that goal, MEF is working with ETSI-NFV, ONF, TMF and others, and it has launched a set of open source initiatives through which such as OpenDaylight, OpenStack, and OPNFV are being enhanced and applied to create a reference implementation of the LSO architecture.

It all started last November, when Cisco DevNet helped MEF take a bold step into uncharted territory, holding its first ever hackathon. The primary goal was to bring together the key subject matter experts defining LSO with the developers creating industry changing open source projects for the mutual benefit of both. The focus was the LSO Presto interface, a"north-south" interface for network resource provisioning. Among other things, teams worked to add support for this interface to OpenDaylight. A complete a summary of this industry changing event can be found here: LSO Hackathon debut at GEN15.

The impact of that first hackathon extended well beyond the code produced over the course of that week. Participation by open source experts from a mix of long time MEF member companies and non-member companies caused the MEF to make its work-in-progress specifications and corresponding APIs available to non member companies. It also prompted MEF to consider how it treats contributions in the form of code rather than written documents and specifications. More publicly, it inspired the creation of two new projects within MEF, OpenLSO and OpenCS, both aimed at the production of open source reference implementations aligned with MEF architectures and specifications.

Last but certainly not least, it led to MEF working with Cisco DevNet to plan a second LSO hackathon, the Euro16 Hackathon, as part of the recent Q2 MEF meeting in Rome. The Euro16 hackathon raised the bar early in the planning stages, challenging teams to work not only adding support for LSO Presto as they did during previous hackathon, but also on LSO Sonata, dealing with ordering and serviceability across service providers.

As with the previous hackathon, registration was free and open to everyone. Registrants included individuals from 16 different companies. Most participants met together in Rome, while others engaged effectively from remote locations. To get things going, organizers provided some background on the LSO architecture. Next, each team gave a brief presentation of their goals and objectives, including the projects and products they intended to use and how their proposed work fit into the LSO architecture. Party lines blurred almost immediately as participants identified and jumped at the chance to work across multiple teams with new colleagues and technologies. This excitement and energy continued for the next two and half days, as participants worked feverishly to make the most of the opportunity at hand. The results were astounding, exceeding all expectations of the event organizers and the participants themselves. 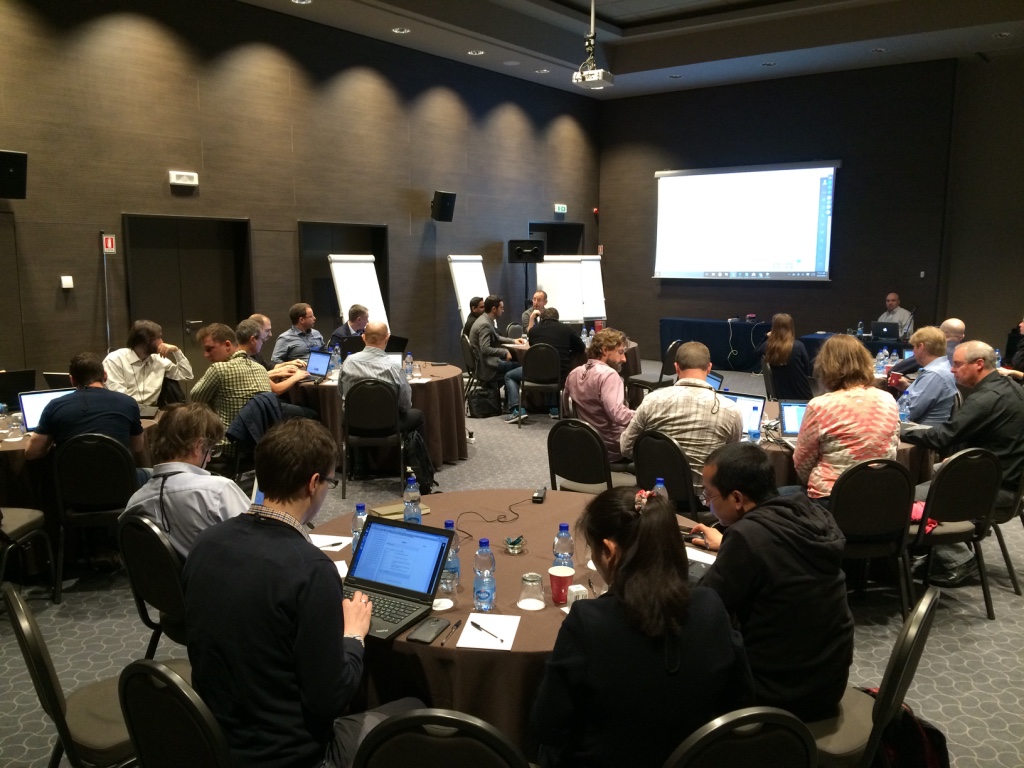 One team, with members from Cisco, HPE, Amartus, Microsemi, and Ericsson, worked on adding support for the Presto interface to OpenDaylight. This work was done within the context of the UniMgr project and running MEF's Network Resource Provisioning (NRP) UML model through the xmi2yang tools being defined by the ONF Eagle project to produce a YANG model that is then used to generate code for the Presto interface within OpenDaylight. The team also started work on Cisco IOS-XR, Microsemi, and Tail-f NETCONF interface activation drivers to enable OpenDaylight to configure the underlying network. Their work uncovered issues with the NRP model, the ONF Core Model core model on which it is based, and the xmi2yang tool coming out of the ONF Eagle project. It highlighted that code generation from the resulting YANG models is not straightforward, partly because ONF Core models and derived MEF YANG models are information models and code generation requires data models. Here we see a very important outcome of the hackathon, providing a reality check to potential approaches and shining a spotlight on important details that might otherwise get glossed over. 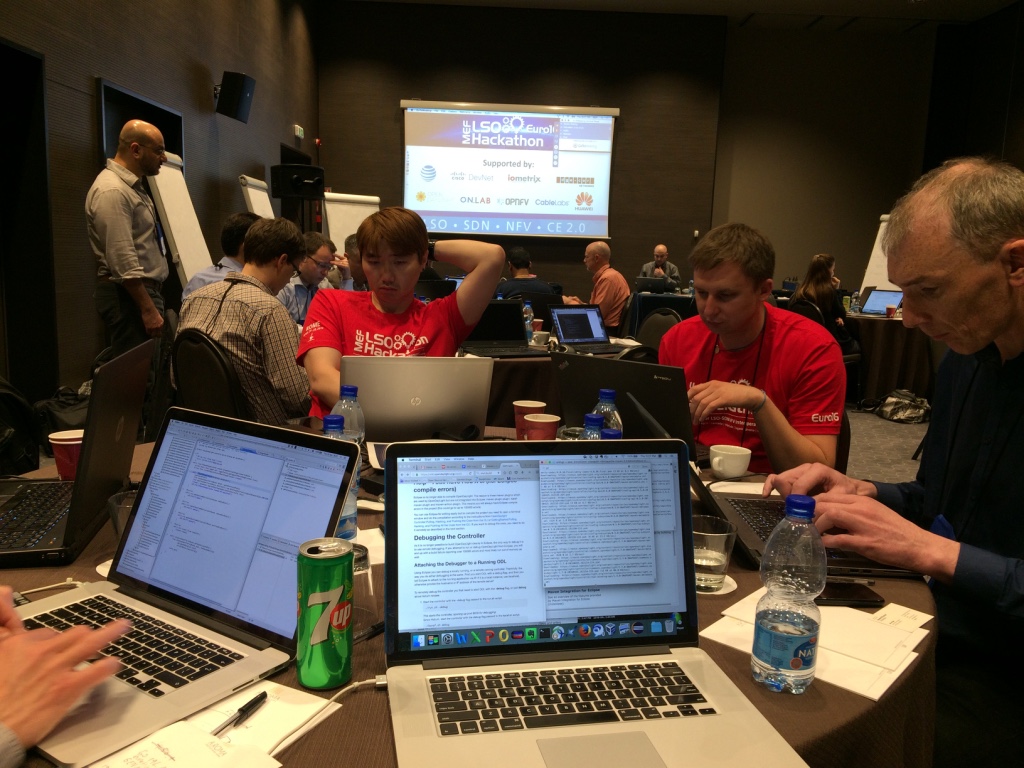 Working closely with this team were folks from Gigaspaces. They used the northbound interface of the Cloudify open source orchestrator as a sample LSO Legato interface implementation, and implemented the Presto forwarding constructs to communicate with the OpenDaylight UniMgr implementation under development by the previous team. In doing so, they identified gaps in the Legato inputs for ordering. They also pointed out that support at the Presto interface today is layer 2 only and that MEF needs to add support for layer 3 to its forwarding constructs.

Another team, compromised primarily of participants from long time MEF member companies (e.g. AT&T, Ciena, CableLabs, Ericsson), broke new ground for the hackathon, tackling ordering and serviceability between service providers as defined by the Sonata interface. This team used AT&T’s internal API to simulate taking an order from a customer, then used an experimental version of the Sonata API to communicate the order details between service providers. In the process they discovered some redundancy/duplicate fields in the ordering API, (e.g. customer address fields repeated in multiple places). The receiving SP process the order and configured the underlying network accordingly using BluePlanet with the ONOS controllers and EdgeCore switches. Here we see the hackathon identifying gaps and issues in the interface specs at the time these specs are being produced.

Yet another team worked with Enterprise CORD (Central Office Re-architected as a DataCenter), or E-CORD. E-CORD makes heavy use of open source, most notably, XOS and ONOS. Through close interaction with other participants during the event, the E-CORD team arrived at a redesigned architecture that is more appropriate for LSO. The new architecture will replace what they brought to the hackathon and be used for future work and hackathons. This demonstrates the tremendous value of the hackathon to help identify and address issues early. They also started down the path of implementing the Presto interface via the evolving NRP API.

Overall, the hackathon was viewed by all involved as a huge success. Of course there were things that could have been done better, but the participants agreed that the time spent preparing for and participating in the hackathon were extremely valuable and in productive. Stay tuned for announcements and news regarding the next in the LSO hackathon series, most likely as part of MEF16 in early November in Baltimore-Washington.