I was talking to a co-worker the other day about the transition to software and API's.  His comment was "I now get this API thing and how it is going to make the life of the network engineer more productive". He then asked a great question: "As a network engineer, what are the first five APIC-EM API I should know"?

I thought I would take a bit of time to answer his question and share it with you.

As you probably know, APIC-EM is Cisco's controller for the Campus and WAN.  As a controller it treats the network as a system and abstracts the complexity of the network-devices and the connections as a set of REST API. The controller knows about every network-device (switch, router, Wireless), every interface, every host connected to the network.

Everything on APIC-EM can be done via API.  Provisioning an SD-WAN solution, end-to-end QoS, Network Plug and Play for on boarding network-devices.  Before we get into the super powerful policy APIs, I thought I would start with the top 5 basic API that might help you be more productive.

Each blog in this series will focus one of these five topics.

I appreciate that not everyone is a programmer or scripter and that is ok.  All of the examples include a example of using a REST API client built into the controller called Swagger… no coding required.

First a bit about swagger

Swagger is an API documentation tool.  The "API" button in the top right brings up the swagger pages.  The great thing is you can click on the "try it out" button for an API and run the REST API call directly on the controller. You get to see that REST call that was made plus the full response.    To access the always on sandbox at https://sandboxapic.cisco.com  User: devnetuser, Password: Cisco123!

You will need to have a shell or command line to run the commands below.  These should work on a MAC or Linux machine.  You will also need to have the "requests" python library installed.    For tips on getting your environment python enabled, see the DevNet Learning Lab setup

Here are the steps you need to take:

This API provides a list of all of the network-devices the controller knows about and their attributes. Things like serial number, software version, uptime etc.  You can either get all of the devices, or a subset.

The first example uses swagger to make the API call.  You can skip this step and go straight to the code if you like.

From the swagger main page, click on "Inventory -> Network-device", and select the first example highlighted below "/network-device"

You should see the following, you need to fill in the scope (just put in "ALL"), then click on "Try it out" 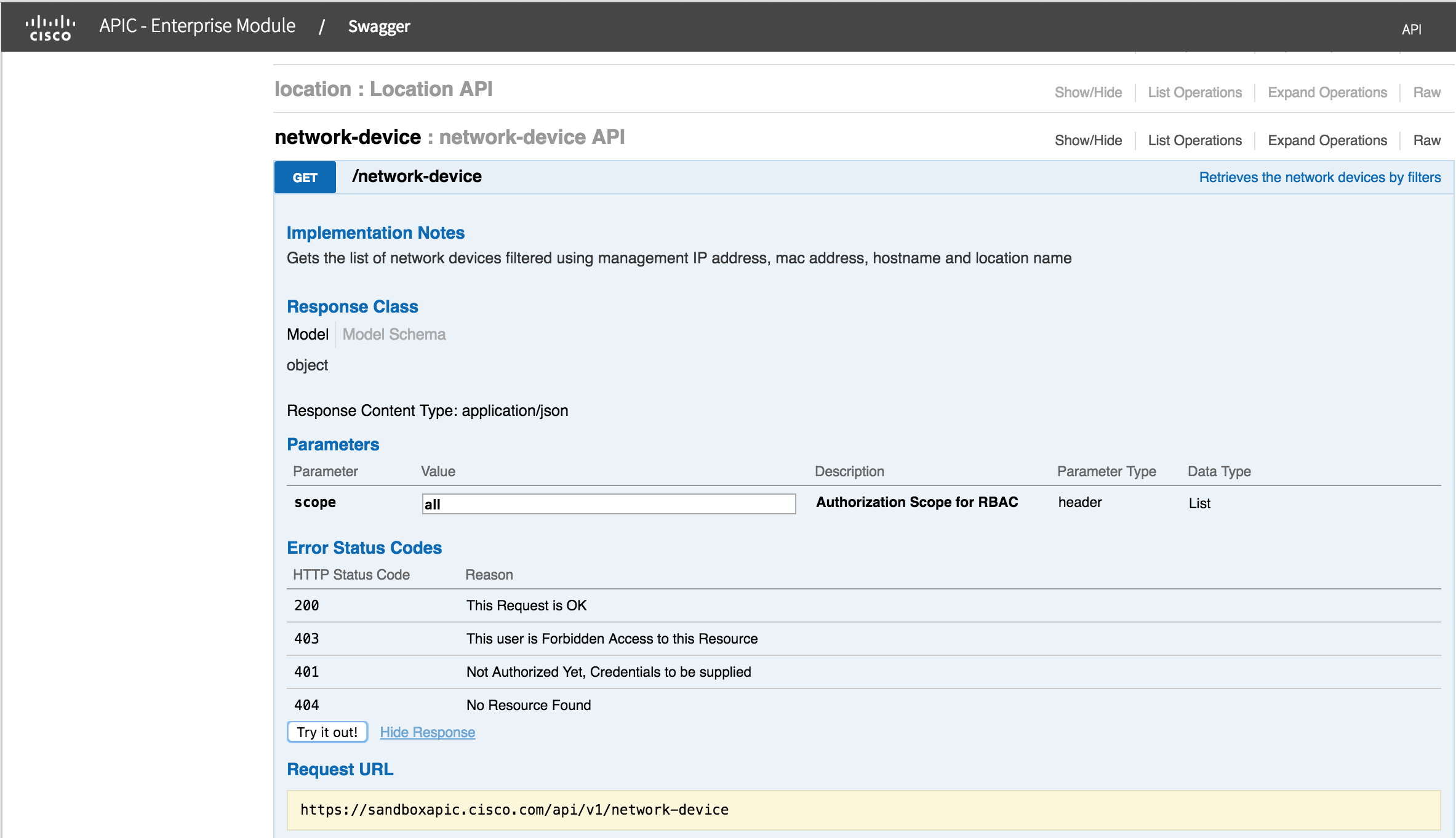 Scroll down and you will see a list of network devices, with their attributes. 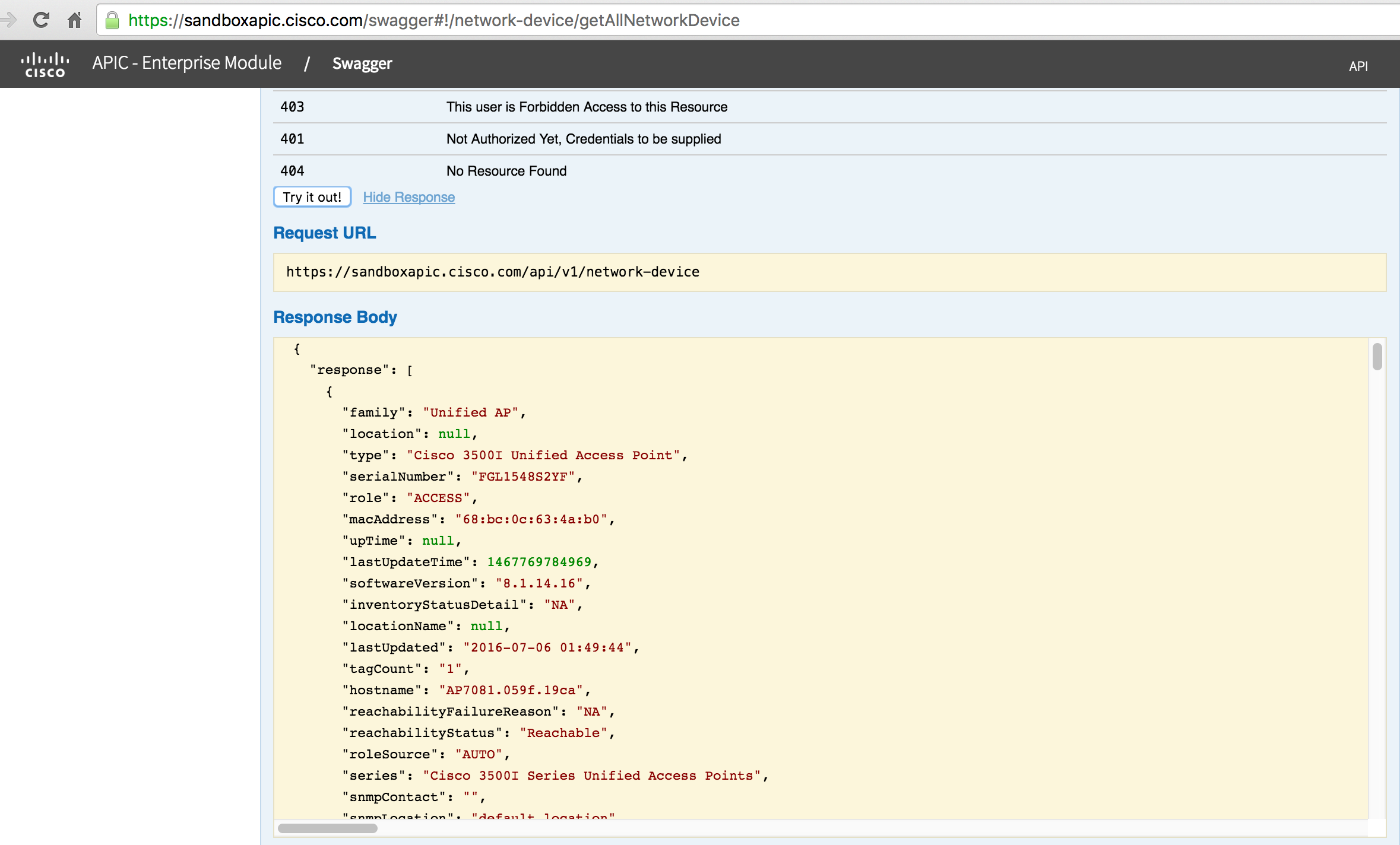 You can also get information for a specific device.  In this case you will need to scroll to the URL "/network-device/ip-address" 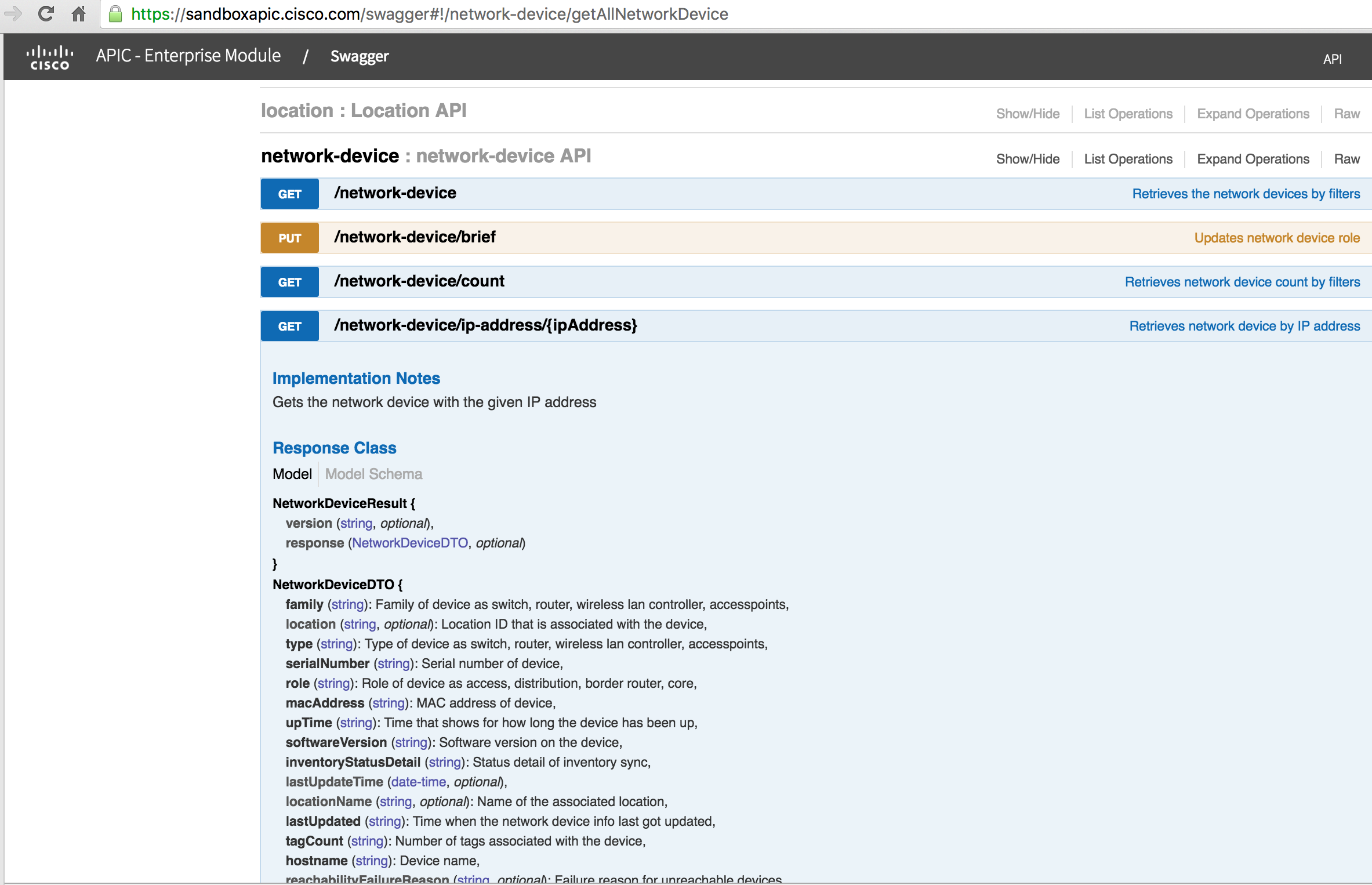 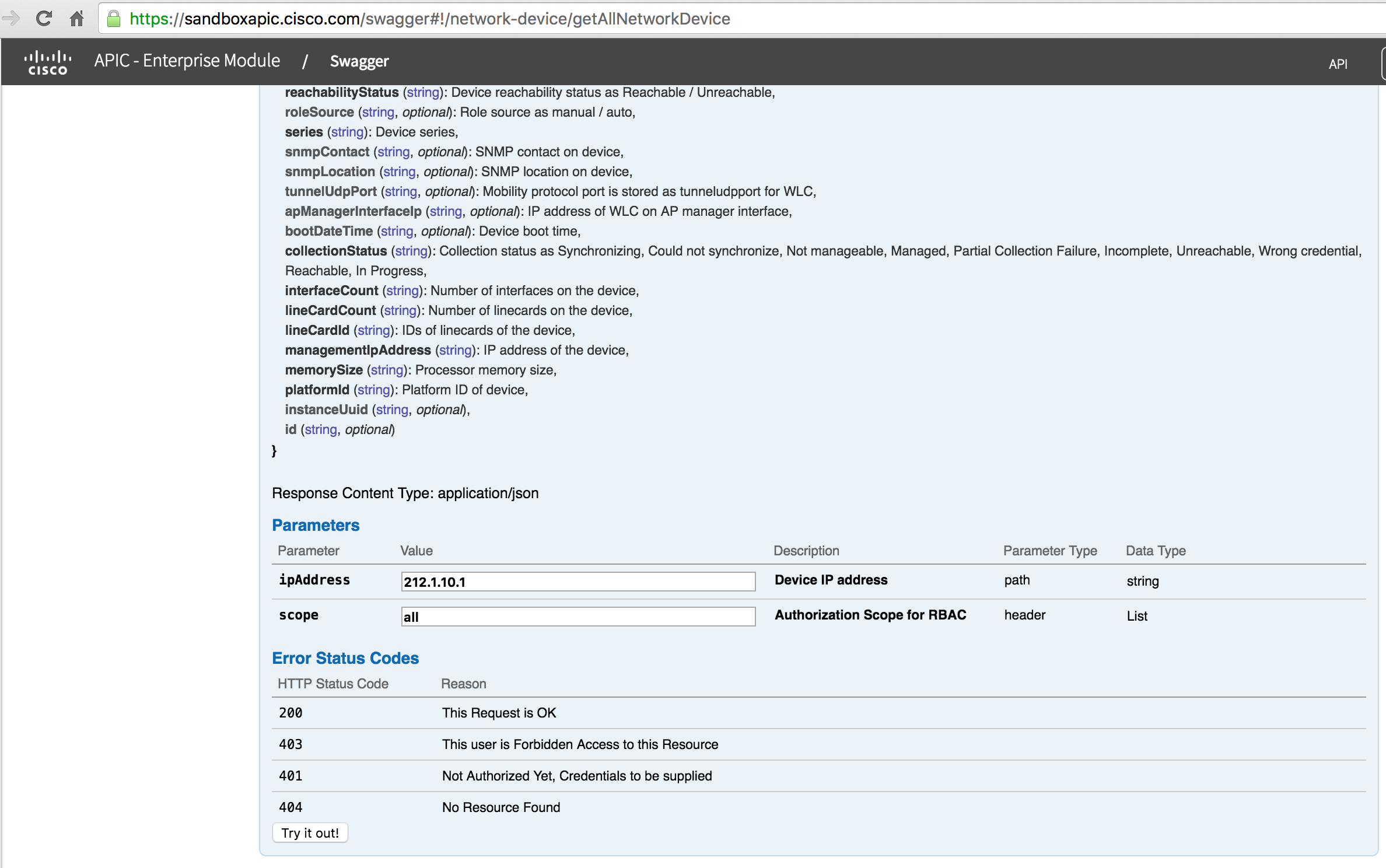 Click "Try it Out" and you will see the following result.  You can see the URL that was sent as part of the API call "https://sandboxapic.cisco.com/api/v1/network-device/ip-address/212.1.10.1" 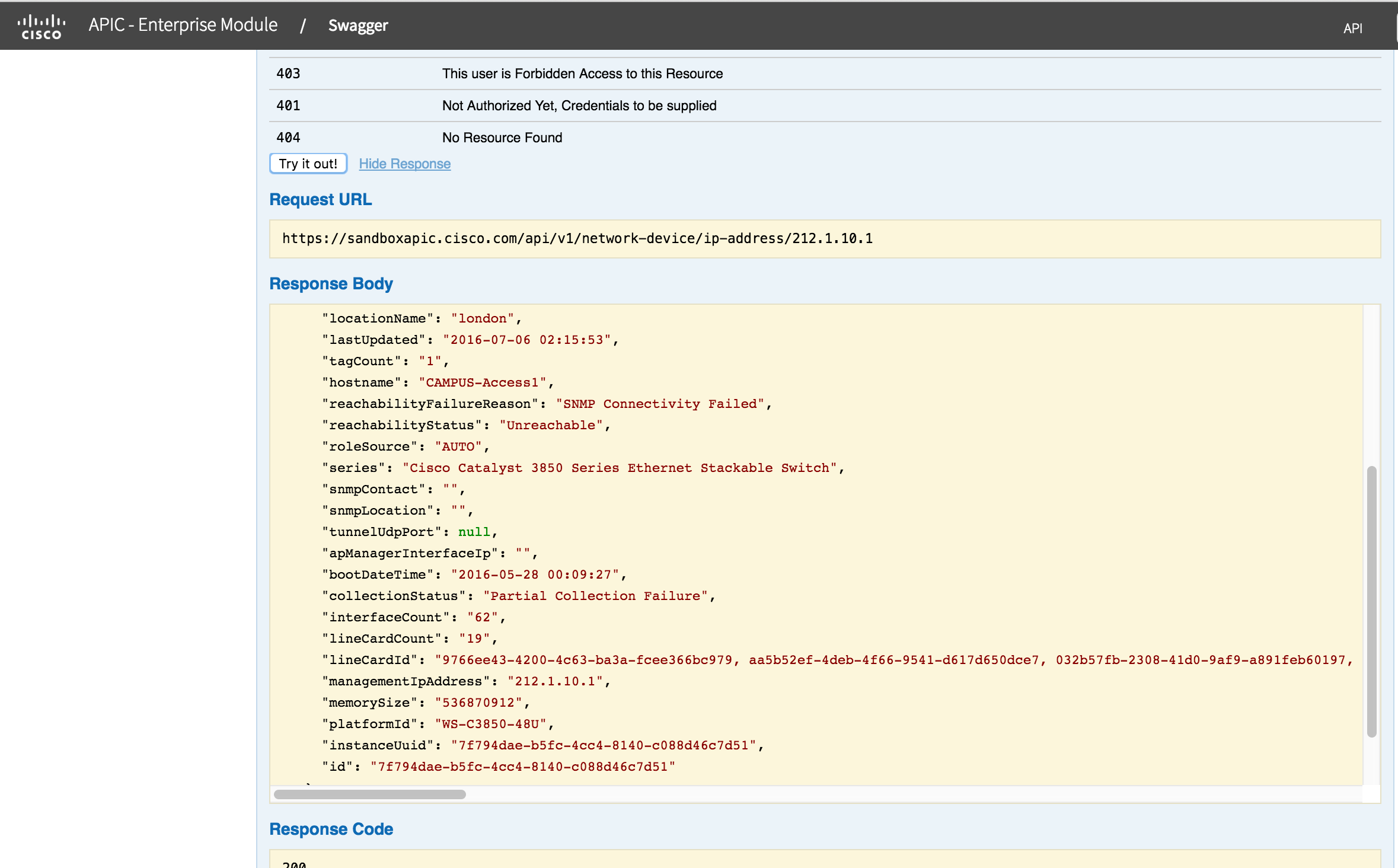 You can do a similar thing with the scripts.  Run the script "01_network_device", and you will see the following fields. Most of these are self-explanatory. The column labelled "role" is interesting.  Role has been inferred by the controller, based on knowledge of the network as a system.  AccessPoints do not have an uptime.

If you run the script with a specific network-device ip address, you will get all the attributes of the network-device.   Notice the following

This first example gives you a tool to get an overview of your network-devices and their properties. You can the concept of "network as a system" with inferred attributes such as "role".

The code for this script is very simple.  It does rely on some helper scripts that are out of scope for this discussion.  There are two different REST API calls.

The script has a simple print format string which you can modify.  You could easily change this to output a cvs format, add new fields etc.  Don't be too concerned about the complexity of the print statement with the format string.  The numbers in the {} are just positional paramters, and the number after the : is the number of characters for the field.  e.g. {0:17} says the first variable (device['hostname']), will need 17 characters.  The next {1:14} will be the device['managementIpAddress'] and it needs 14 characters.

In case you are wondering about authentication, all of the API are authenticated.  This is hidden in the util.py file.  For more information about APIC-EM authentication, see this CiscoDevNet learning lab. 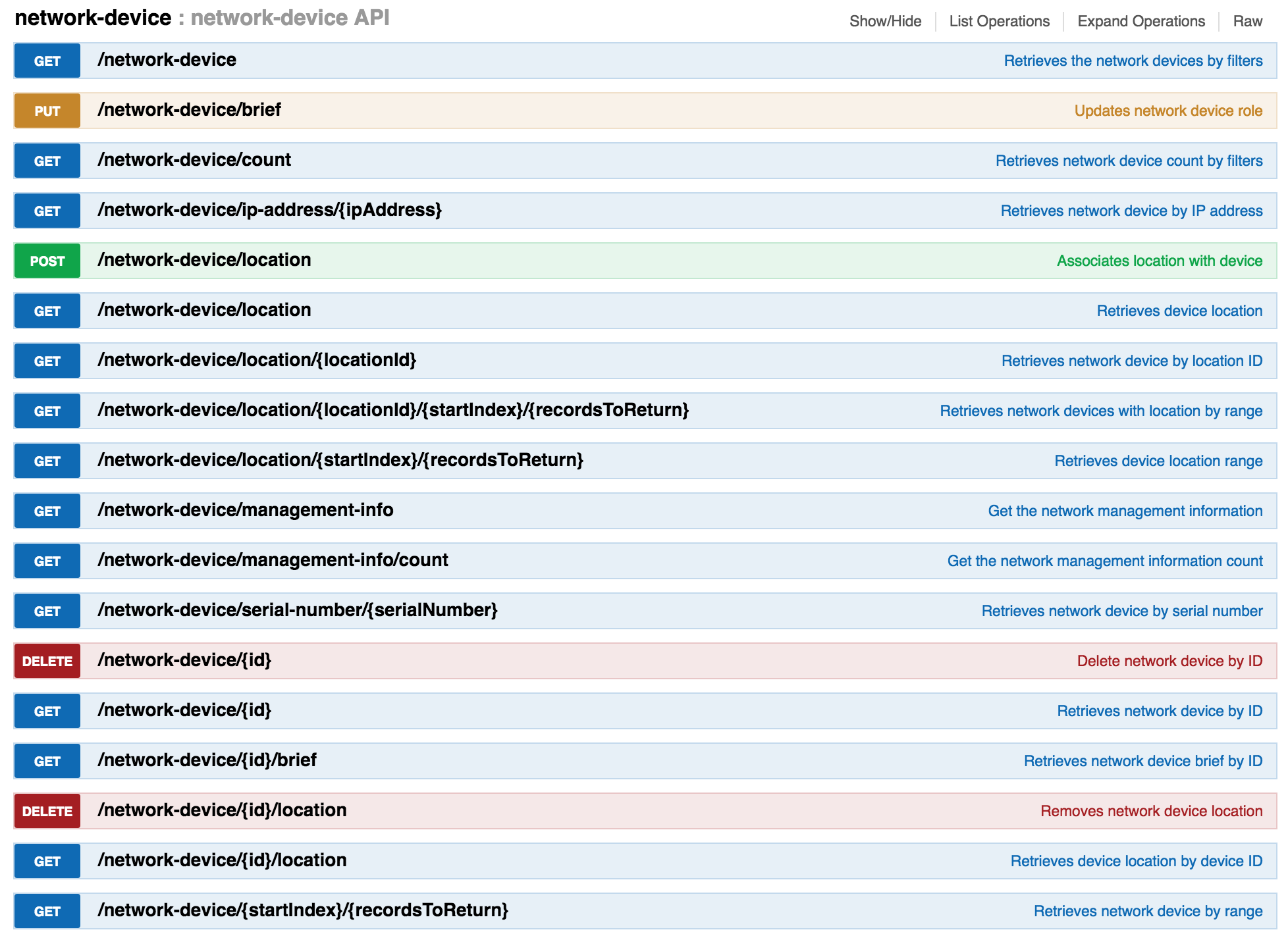 This blog covered the first of the useful API /network-device.  The next blog in the series will look at /interface and a tool for finding all the hosts and status of the interfaces on a device.

In the meantime, if you would like to learn more about APIC-EM, you could visit Cisco Devnet.  All of the code samples can be found in this  Github repository.

Latest Contents
Cisco pyATS Genie Ops: ospf.learn() fails on iosxr router
Created by nkalyvas on 08-03-2021 06:57 AM
0
0
0
0
I am trying Genie Ops Models on an iosxr Router (Cisco IOS XR Software, Version 6.5.3[Default]) interface.learn() works okisis.learn() works okospf.learn() --> the commands run, the output from the cli is flowing and then I get a Traceback: &... view more
Permission denied - Ansible Hands On NXOS Sandbox
Created by EvanC on 07-26-2021 07:28 PM
0
0
0
0
I'm playing with the Ansible Hands On lab with NXOS Sandbox On step 3, I understand the purpose is to create a playbook to copy a customized hosts file to replace the default hosts files stored in /etc/hosts However, when I run the playbook... view more
IOS XE command option json
Created by Salongo on 07-22-2021 05:39 PM
2
0
2
0
Hi Community, I was wondering if anyone has faced this issue. The below command option is not working for me: sh ip int br | json   OR sh ip int br | json-pretty. Version: IOS XE 16.12.5. Re/Saleh Re/Sal
IOS-XE Streaming Telemetry incomplete
Created by lukeberkheiser on 07-22-2021 08:41 AM
0
0
0
0
Hello,I'm trying to setup monitoring of IOS-XE devices using Streaming Telemetry to replace SNMP. I'm able to get some data through my Telegraf-Prometheus-Grafana setup, but it looks like I'm not getting all the entries in the YANG tree. My devices are ru... view more
ietf-interface and CIsco-IOS-XE-native which one is suitab...
Created by Jacky_hotel_california on 07-21-2021 06:59 PM
3
0
3
0
Hello Boss, Please kindly see the question below.    Question is here,  I can get the data with filter1 but I am not able to get anything with filter2.I'd like to know what's the scenario we use  ietf-interface and what's the... view more
Create ContentLogin to create content
Question or Discussion
Blog
Document
Project Story
Video
Idea
Related Content
Discussions
Blogs
Documents
Events
Videos
Ideas
Project Gallery
Content for Community-Ad