Welcome to part 4 of the "APIC-EM API productivity series" for network engineers getting started in API and scripting.

By this stage of the blog series, I am going to assume you are familiar with swagger (API documentation tool) and the location of the github repository where I have shared the code samples (the GitHub location is at the bottom of the post).

Path trace traces a path through the network from host A to host B.  You can also provide TCP/UDP port information and the controller will look at points in the network where there is multiple paths and let you know which of the possible paths will be used for this flow.

In addition you can get device and interface statistics along the active path.  In release 1.2 this was been expanded to include performance monitor stats and ACL tracing.

It is also possible to run a path trace through swagger.  It is a little more complex than earlier examples as there are three steps involved.

The first big difference is that this requires a POST.  We send data to APIC-EM to describe the path trace parameters, in this case just source and dest IP along with the "run stats commands". I am going to use the payload from the sample python script in the next section.  You will need to paste in the following text into the text box shown in a red rectangle.

Then press "Try it Out" 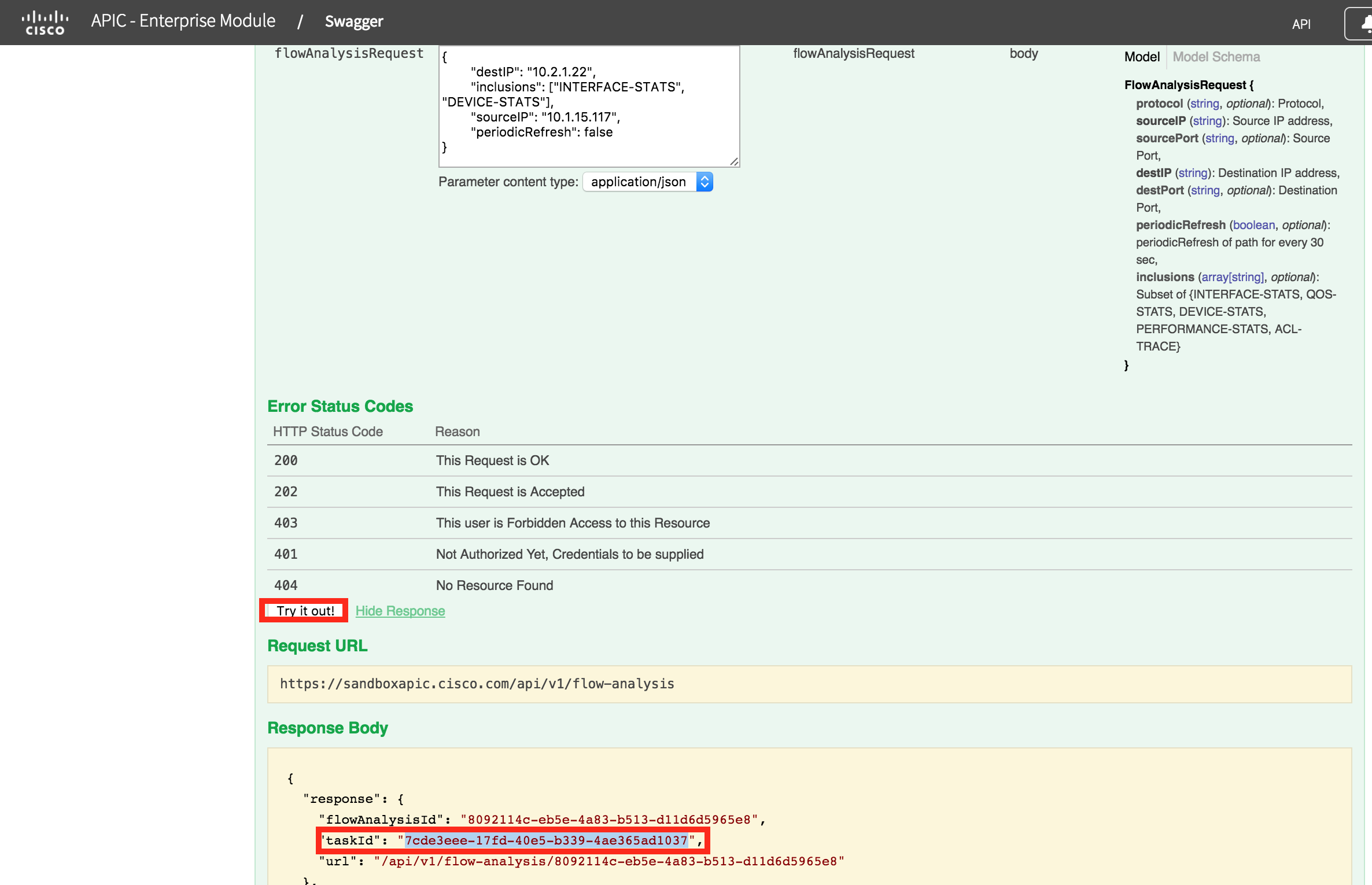 To poll the task, use the /task/{taskId} GET request.  Paste in the taskId (yours will be different), and press "Try it out" 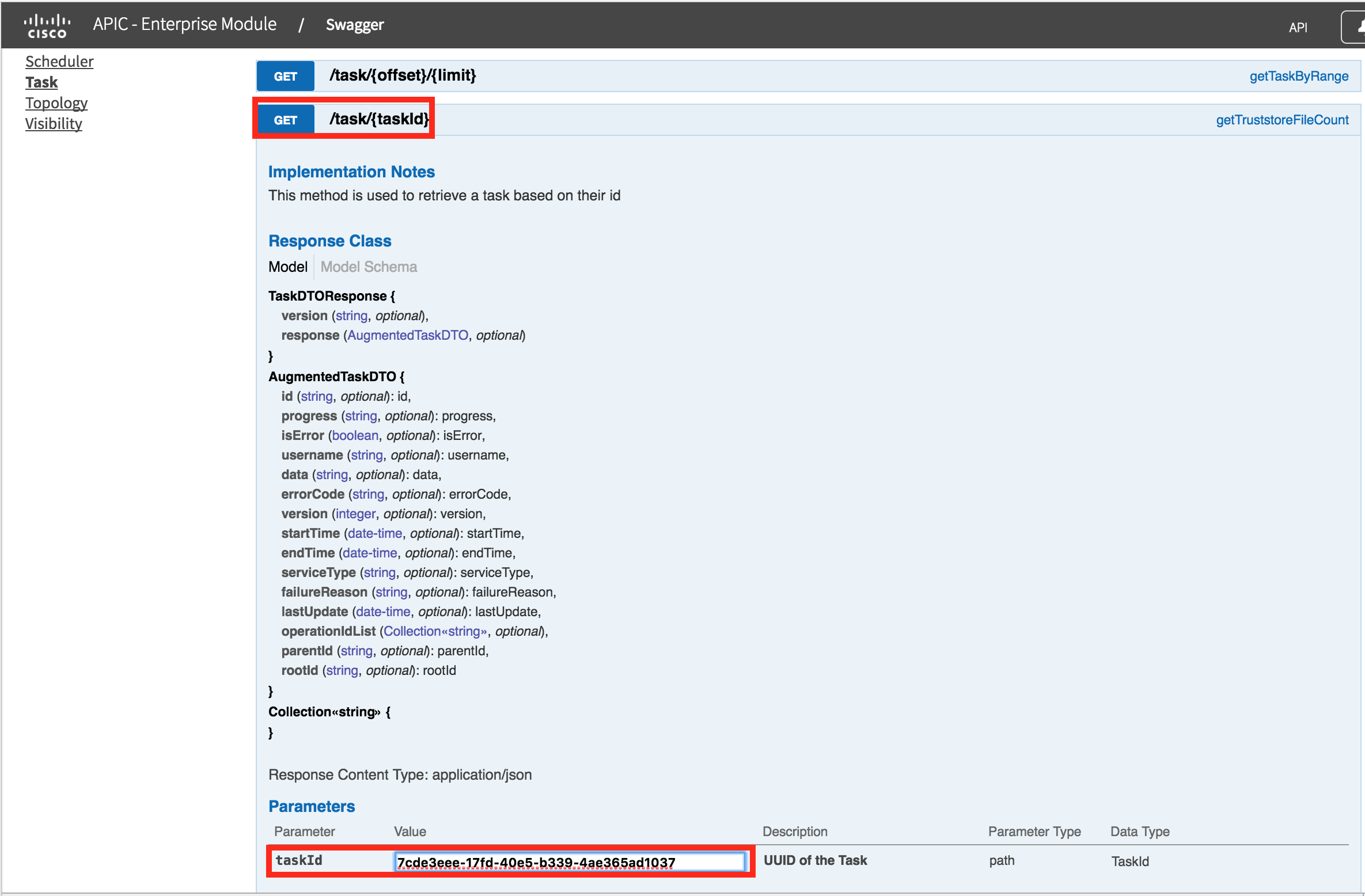 You will get a result similar to the following: 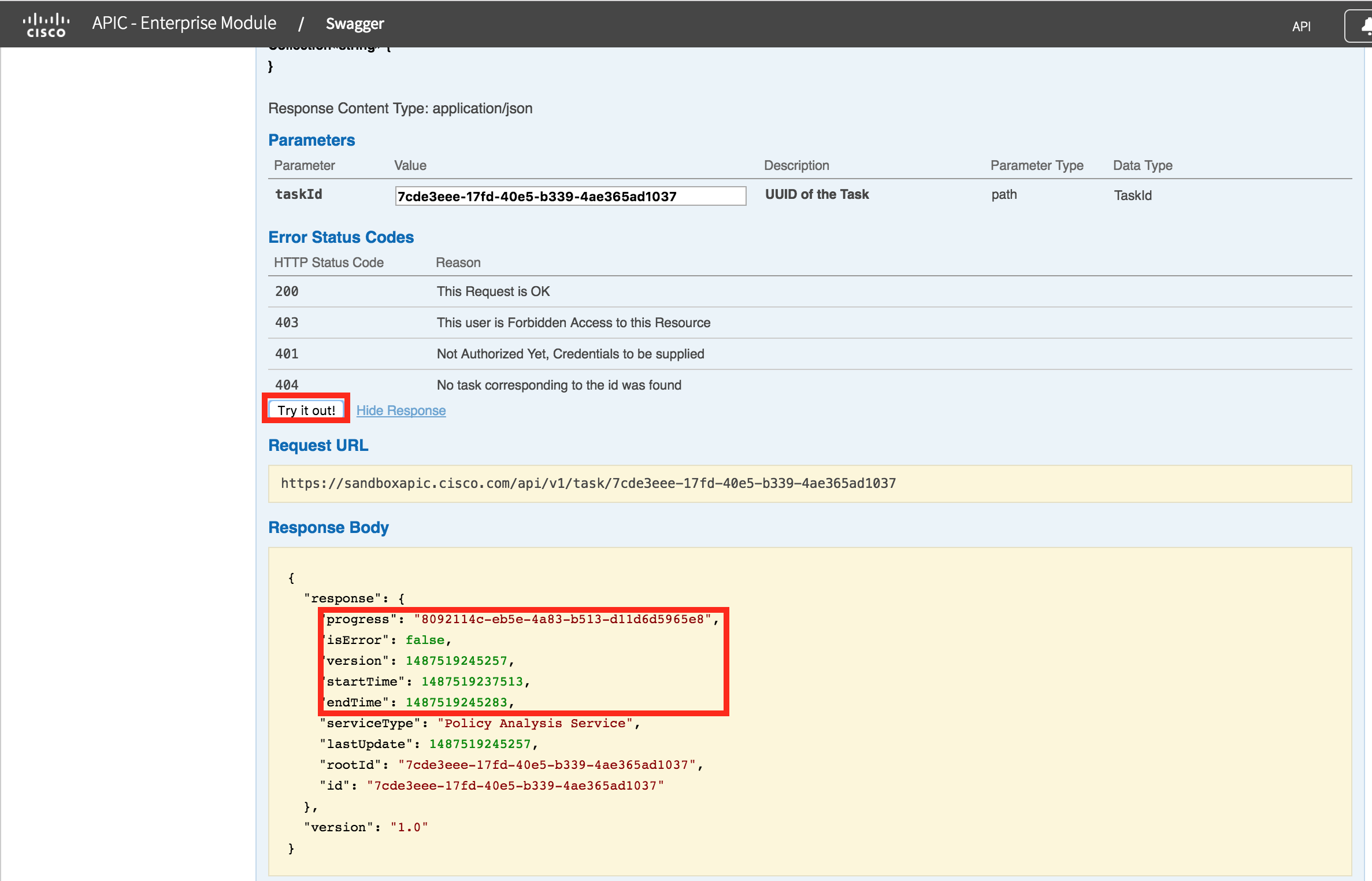 This shows the task is complete (it has an endTime), and has no errors (isError is false).  The flowAnalysisId is in the "progress" attribute. The final step is to GET /flow-analysis/{flowAnalysisId}.

Use the flowAnalysisId from the task (yours will be different, unique to your system).  Press "Try it out" and you will see the output from the request. 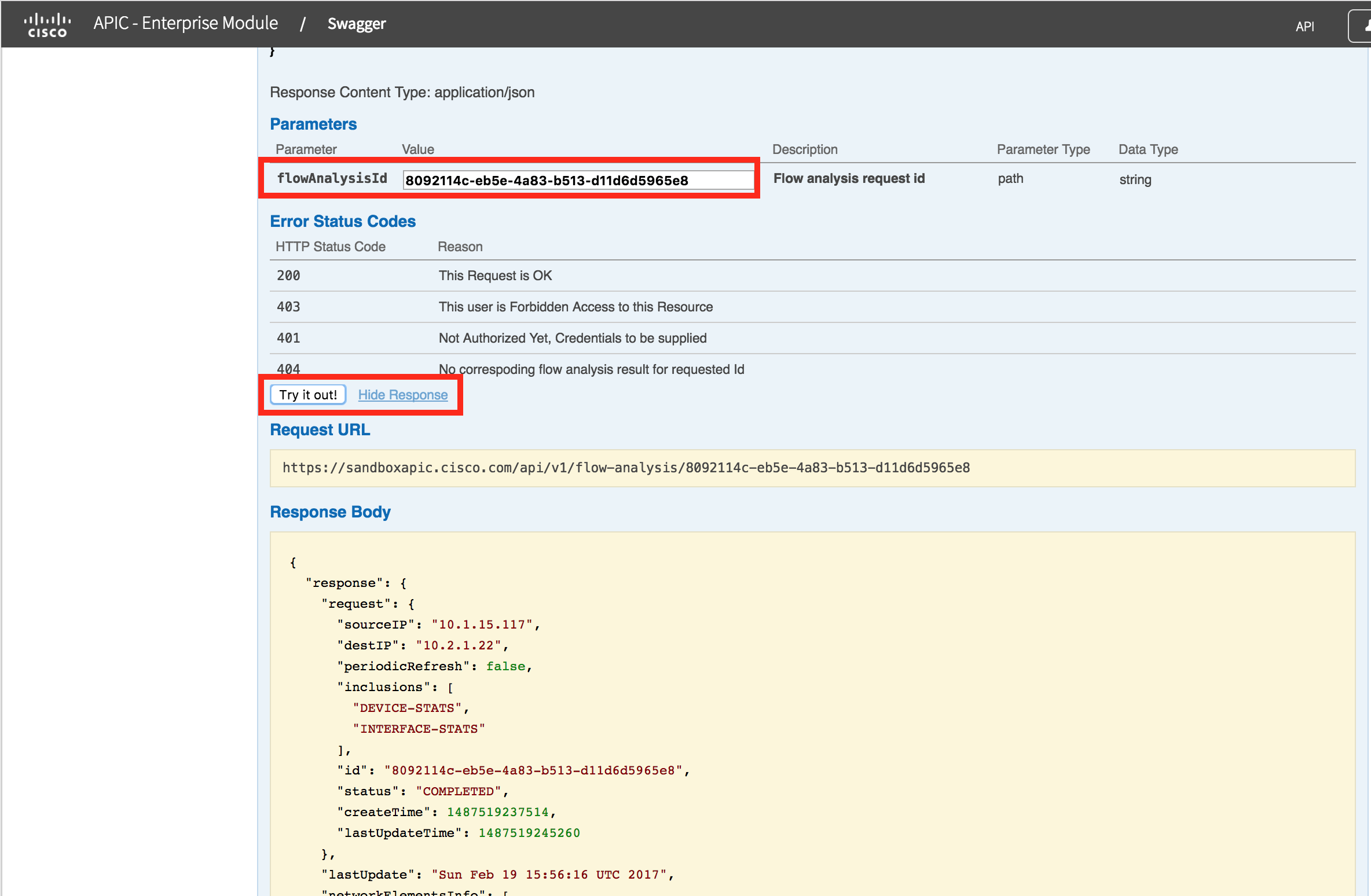 NOTE:  You will notice that the flowAnalysisId returned by the task, is the same one that was returned by the initial POST in step #1. You are probably asking "Why not just poll the flowAnalysisId"?  You are correct, you could do that in this case. The reason for showing you is, this is the general pattern that POST/PUT/DELETE calls use on APIC-EM.  It is good to understand how it works for other use cases.

All of these steps can be automated in a script.

The output is quite verbose, as it shows the complete JSON payload as well as a summary.  This shows the summary section

There are three API calls used in this code.

As in blog #4, the "argparse" library is used to parse the command line options.

The main work is done in the following function.  Not the function post_and_wait, really just waits for the task to complete.   The post_and_wait function polls /task to make sure the task has complete.  In the example above, it was polled a total of 4 times, 2 seconds apart.

The next step is to print it out.  There are lots of options here in terms of formatting, I have just dumped the raw JSON, as well as attempted to pretty print a little.

This is the final blog in the series.  This blog covered  /flow-analysis, an API to do a path trace between hosts on the network.  /flow-analysis also provides stats on interfaces, QoS, Perfmon and ACL trace.

Take a look at my blog index for other related topics. https://communities.cisco.com/people/aradford/blog/2016/11

In the meantime, if you would like to learn more about APIC-EM, you could visit Cisco Devnet.  All of the code samples can be found in this Github repository.

This is terrific documentation, Adam - thanks!

I'm looking to take the output of the flow-analysis API and graph it in Django, possibly using django-netjsongraph.  Have you had any experience with this or similar graphing tools?

My ultimate goal would be to color the devices red, yellow or green based on CPU and RAM util and color the links based on packetLossPercentage and possibly bandwidth utilization percentage (assuming I can determine link speed somehow to compare it to inputRatebps and outputRatebps.

Have you seen anything capable of this sort of graphing?  I'd like to be able to give my application teams and incident managers access to path trace but not via the APIC-EM console, if at all possible.  It'd be easier for them if I could just give them an API call via Django (and then into APIC-EM) from their existing monitoring tools.  (Yeah, I could let them make calls directly into APIC-EM's API but I don't want to expose the entire API to them for fear they might play around and do some damage.)

for the feedback, I really appreciate it.  Nice to see that this was of some use.

I have looked a little at graphing tools, but not recently.

Will try to find some time to take a look.

I like the idea of rendering this in a more interesting (graphical) way, that has come up a few other times too.

BTW, not sure if you noticed, but there are a heap of stats available as part of the path-trace too.