Starting out with network automation

Many customers are asking how to get started with network automation. There is an expectation from the rest of the business that the networking team will be changing its operational model and becoming more agile. How can you get started? One easy way is automating the deployment of new devices.  Network Plug and Play (PnP) is a great way to get started. It is a foundational element of the Cisco Digital Network Architecture (DNA).

What is Plug and Play?

PnP is a mechanism to automate deployment of devices. Simply plug a device (router, switch, access point) into the network. It discovers the controller (more on how that happens later), and the automation begins.  A few minutes later, your device is upgraded and/or configured and operational.

The first thing that needs to happen is for the device to get in contact with the controller. There are five mechanisms you can use to make this work:

Let us go through all the steps to get a switch up and running. The first step is to create an initial configuration file for the switch and upload it to APIC-EM. Plug and Play will require a set of device rules to map a device serial number to a configuration file and/or a software image.  To make it easier to organize these rules (there might be hundreds of them) we use a “Project”. A project is much like a folder on your computer for organizing files.  In this example the project is called “Sydney”.  It is created empty, without any rules, like an empty folder on your computer. 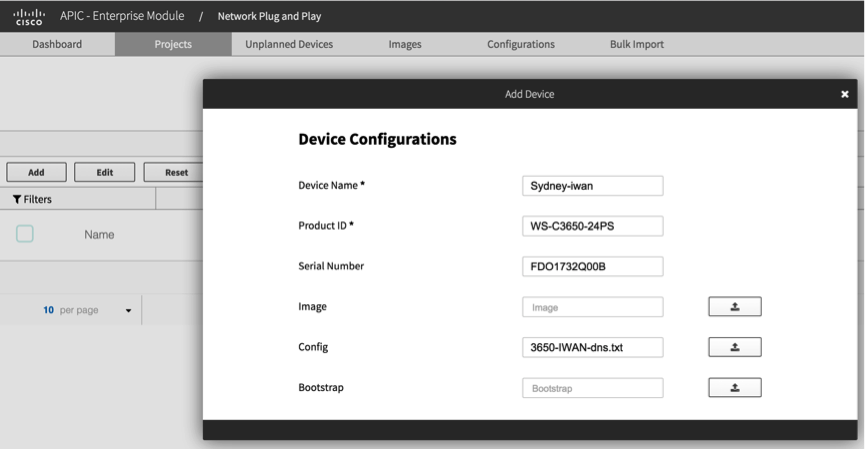 Click “add” to finish this step.  Notice “Device Certificate” has been selected. A PKI certificate will be deployed on the device for secure communication between the device and PnP server.  APIC-EM also has a built in PKI server, which is used to create and manage this device certificate. 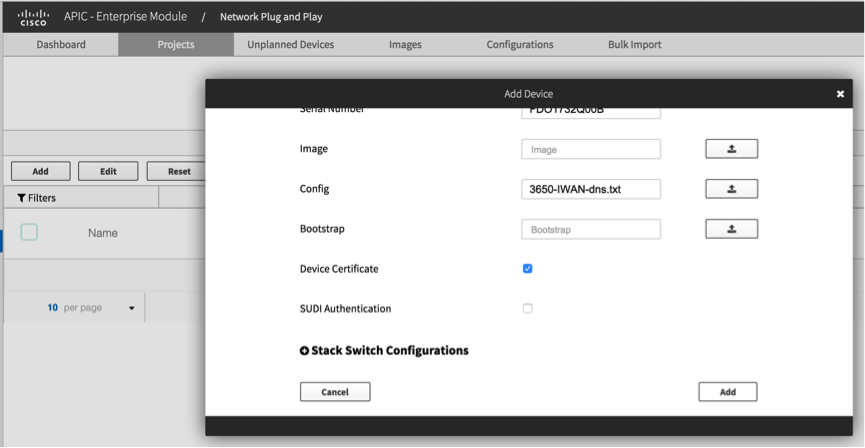 With the above steps completed, our rule is in place. When the device is plugged in, it contacts the controller, initiating the Plug and Play process.

A few minutes later, the device is up and operational on the network.

There was still a bit of human activity in provisioning this device.  I needed to create the initial configuration file, upload it to the controller, and create a rule/project.  Oh, and I needed to plug the device in and power it on.  All except the last step I could automate.  The next blog Network Automation with Plug and Play (PnP) – Part 2 will look at how to automate those steps via the rich API in APIC-EM.

In the meantime, if you would like to learn more about this, you could visit Cisco Devnet . DevNet has further explanations about this. Also, we have a Github repository where you can get examples related to PnP.

Can APIC-EM be used to automate the upgrade of IOS in my network devices? I understand that in the first installation, I can do that. But how about choosing to upgrade devices 6 to 12 months after they've been installed.

Yeah, that's what I thought. Any plans to incorporate that directly in APIC-EM?

One question... do we need any special license if we want to play around with APIC-EM and some switches we have in our lab ?

APIC-EM is no charge.  IWAN app requires a device license (which is shares with Prime Infrastructure).

PnP, EasyQoS and base apps have no license.

. Last but not least, if I have a look at the requirements for the APIC-EM VM machine, I have the feeling I could run half of the google DC within it

What would you recommend for the VM to just play with few switches and routers ?

IWAN has not been tested in this configuration.

Thanks for this great news

I have request the VM, let see if I can get it... I don't need iWAN, we have already a WAN based on LISP fully redundant, and PfR is not a needed by us today. I am more interested in packing my ansible templates and scripts into APIC-EM and let's see what happen.

Cloud redirection is it available ?

Not general availability.  We are still doing controlled.   Should be GA (Generally Available) very soon (~April)

Tell me more about the APIC-EN solution with LISP (and I assume GetVPN).  Where can I see or get the solution? 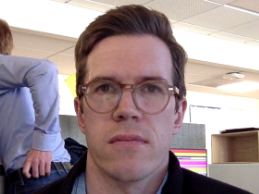 Is there a PNP protocol specification somewhere?

I have a test controller and a test switch. APIC-EM was able to upload the image successfully but post the image upgrade the configuration file was not deployed by APIC-EM. I got the following messages. Would you able to help me on this.

The APIC EM controller and test device in separate subnets but on same location.

Latest Contents
Permission denied - Ansible Hands On NXOS Sandbox
Created by EvanC on 07-26-2021 07:28 PM
0
0
0
0
I'm playing with the Ansible Hands On lab with NXOS Sandbox On step 3, I understand the purpose is to create a playbook to copy a customized hosts file to replace the default hosts files stored in /etc/hosts However, when I run the playbook... view more
IOS XE command option json
Created by Salongo on 07-22-2021 05:39 PM
2
0
2
0
Hi Community, I was wondering if anyone has faced this issue. The below command option is not working for me: sh ip int br | json   OR sh ip int br | json-pretty. Version: IOS XE 16.12.5. Re/Saleh Re/Sal
IOS-XE Streaming Telemetry incomplete
Created by lukeberkheiser on 07-22-2021 08:41 AM
0
0
0
0
Hello,I'm trying to setup monitoring of IOS-XE devices using Streaming Telemetry to replace SNMP. I'm able to get some data through my Telegraf-Prometheus-Grafana setup, but it looks like I'm not getting all the entries in the YANG tree. My devices are ru... view more
ietf-interface and CIsco-IOS-XE-native which one is suitab...
Created by Jacky_hotel_california on 07-21-2021 06:59 PM
3
0
3
0
Hello Boss, Please kindly see the question below.    Question is here,  I can get the data with filter1 but I am not able to get anything with filter2.I'd like to know what's the scenario we use  ietf-interface and what's the... view more
Ping action with XE Yang?
Created by Xiang Zuo on 07-16-2021 07:54 PM
2
0
2
0
Greetings,   I was able to find the Cisco-IOS-XR-ping-act model to automate the Ping actions. But is there anything similar for the XE platforms? I cannot find any. And if none exists, what is a common solution to that - to automate ping action on XE... view more
Create ContentLogin to create content
Question or Discussion
Blog
Document
Project Story
Video
Idea
Related Content
Discussions
Blogs
Documents
Events
Videos
Ideas
Project Gallery
Content for Community-Ad