The first blog in this series gave an overview of network Plug and Play and how it could be used on APIC-EM.  The second blog gave examples of how network-device configuration template could be created programmatically and using the REST API, uploaded to the controller along with the PnP rules and projects.  This blog provides an "all-in-one" script to tie all the scripts together using a client library called Uniq.

I also cover the code needed to build a Cisco-Spark chat-ops bot to integrate into the PnP API.  The output is shown below. 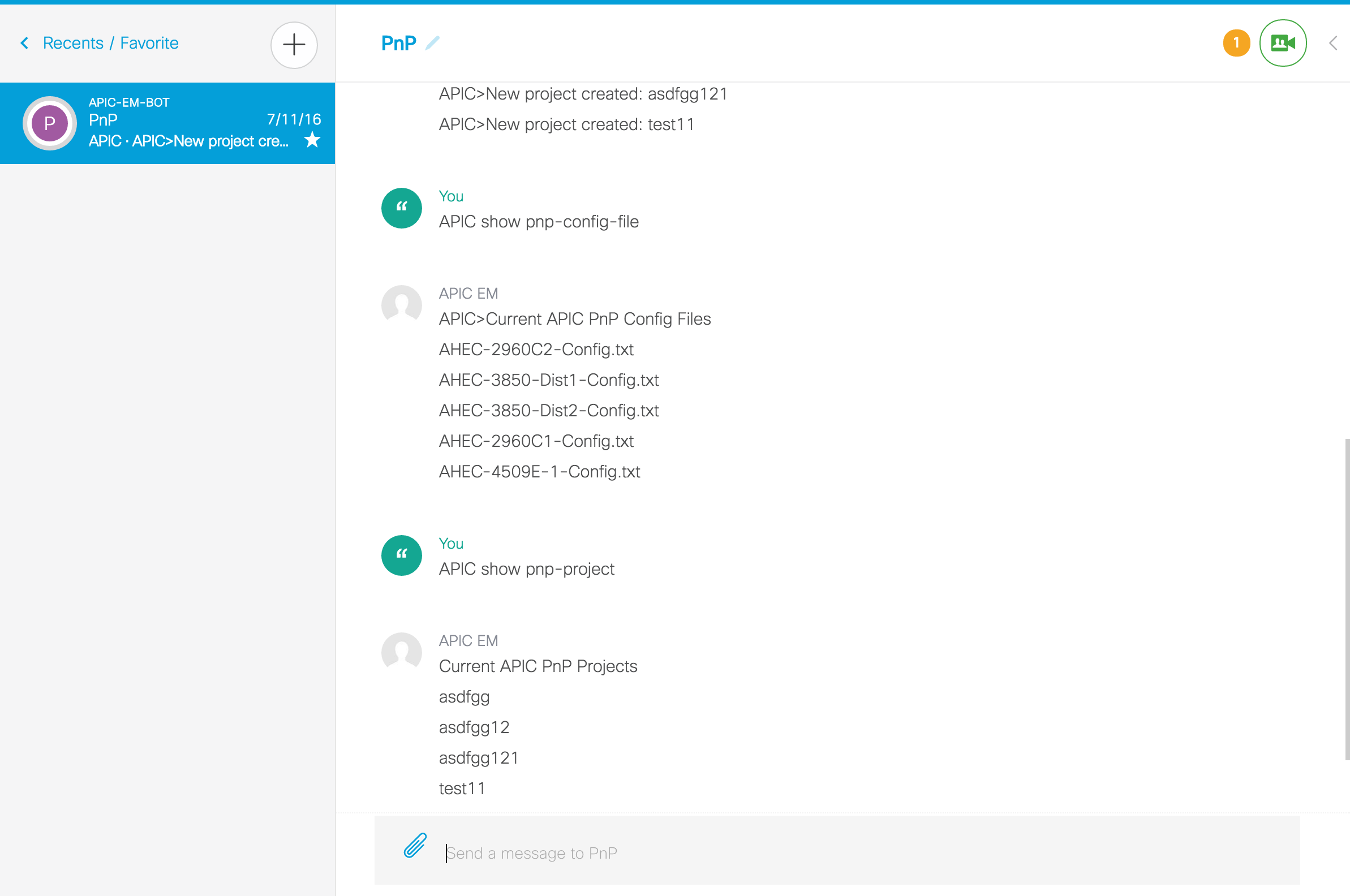 As usual, all the source code is in a Github repository.  Here are the steps you need to take to download them in a terminal session.

Here is what the output should look like  when you run the commands above in a command window.  NOTE:  This is for linux/MAC, windows is outside the scope of this blog.

Cisco has recently published a client library for APIC-EM.  It does require python3.   As per recommended best practice I am going to use a virtual environment for installing custom packages.  Here are the commands you need to use in a terminal window:

Here is the output from running those commands:

As discussed in blog2, a jinja2 template is used to aid the generation of configuration files.  The config_template.jnj file you can see there are two variables: "hostname" and "ipAddress".  These correspond to columns in the inventory.csv file. You could have as many variables as you like.

It is critical to have "end" as the last statement in the file.

Here is an example of running this script.  The output files are stored in the "work_files/configs" directory.  Notice that a suffix has been added to the filenames to make them unique. As the example scripts are using a sandboxapic in the cloud, multiple people can be running the scripts at a time. This suffix should be unique, so you do not clash with other users.  In production you would not do this.

In this blog all of the steps are combined into one script.  A template file is created, it is uploaded to the controller, a project is created and a rule is added to the project.

The first thing needed is a client manager to interact with the controller API.  The file in the parent directory "../login.py" contains the code to do this:

In the code we open a client manager called "apic" that will be used to make all of the REST APIC calls.  Below is a simple example of uploading a configuration file.

Note the apic.file.uploadFile call.   This is using the file API, and the uploadFile method.

Looking at swagger, you can see how this call was generated.  You can see "file" is the collection of filesystem API.  "uploadFile" in red box is the call required to upload a file to the controller. Obviously it is a POST call.

Click on the /file/{namespace} POST API, to see the details of which parameters can be provided. Both "nameSpace" and "fileUpload" are used in the earlier call. 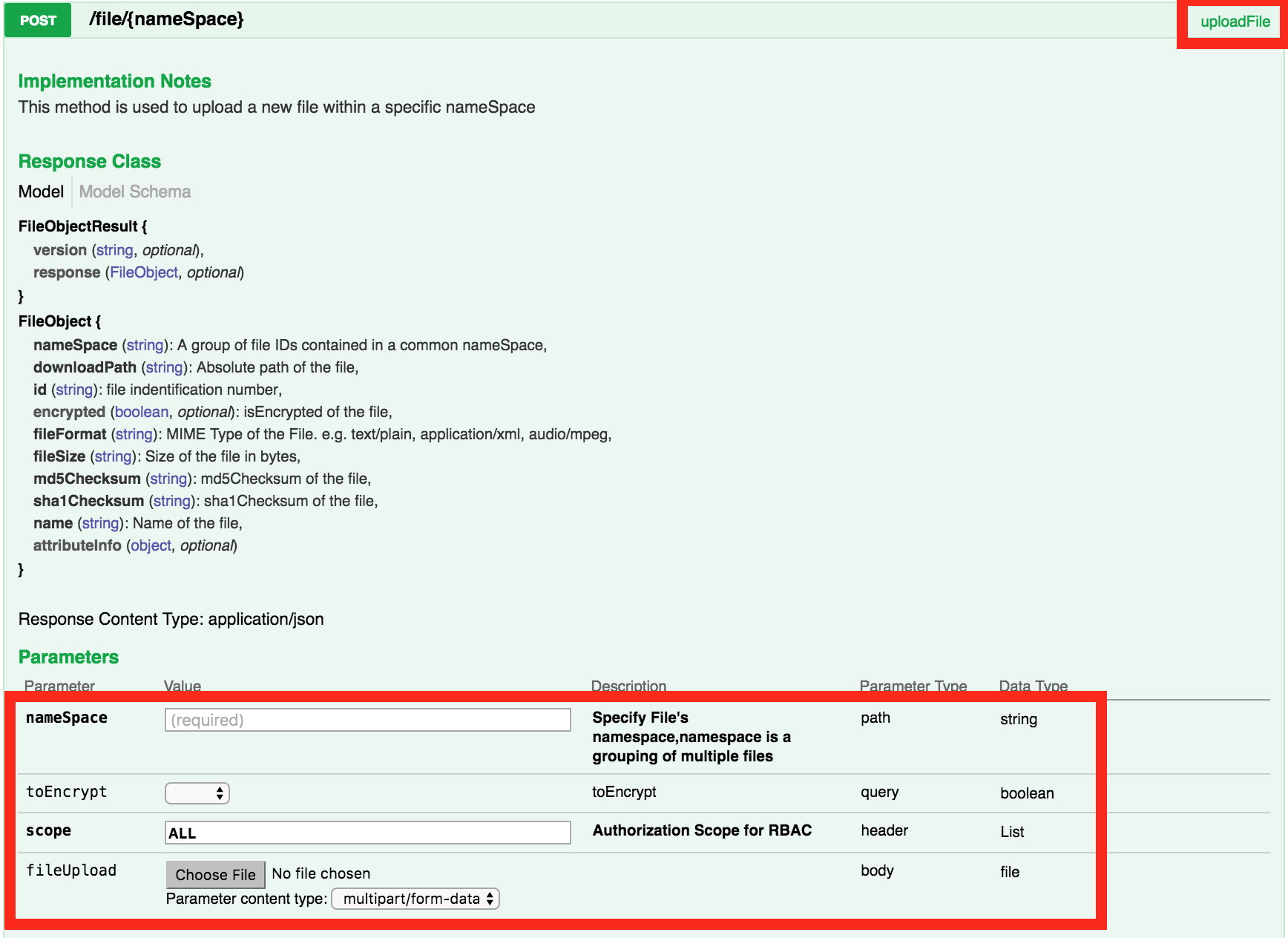 The /file API are synchronous, meaning they block until the call is complete, then return the status and the id of the resource that was created.  For example, when uploading a file, you will not see a response until the file upload is complete.  For a large file, this might take a while.

All other POST/PUT/DELETE API calls are asynchronous, meaning they return a 202 response code and a taskId for the request made. For example, to create a new pnp-project, with a "siteName":"Sydney", you would make a POST to /pnp-project, you would expect a 201 HTTP response code, with the UUID of the resource. Instead the following happens: 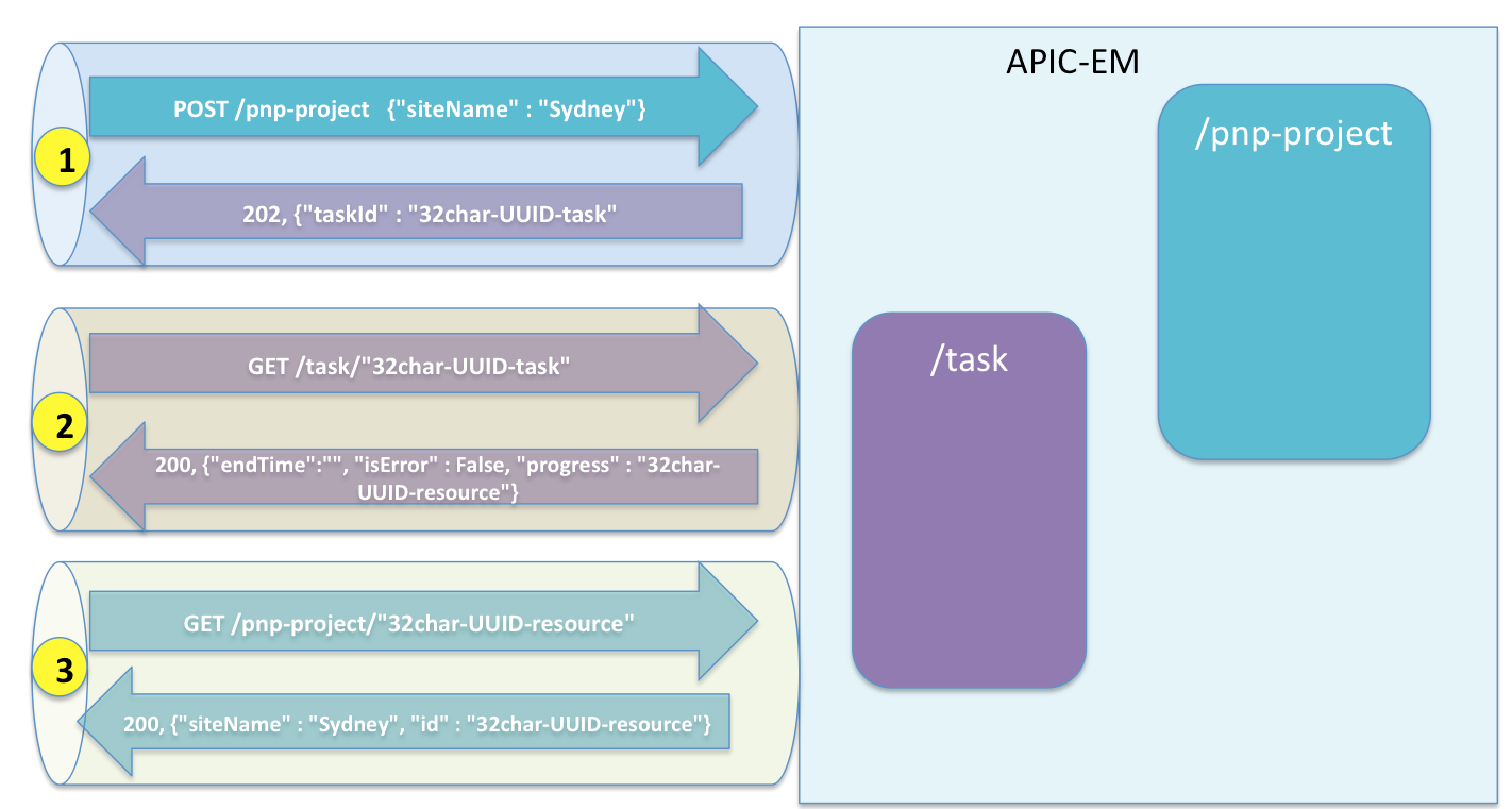 Uniq  simplifies task management with the wait_for_task_complete method.  The id of the project that was created is in the "progress" attribute (it is the "siteId" attribute).

Cisco spark is a collaboration tool that has "room" based messaging.  Spark has a powerful API that is easy to integrate. This post is not going to cover every detail for Spark integration, just the highlights for the APIC-EM PnP integration.

There are two parts to the spark integration.  The first is the ability to post to a room.  This is done for each PnP project created, or when a PnP device rule is provisioned.

The code below shows how this works.  You need to get an  "authentication token" from https://developer.ciscospark.com/.  This is used in the "authorization" header. You also need to know the roomId you are posting to.  Spark has an API you can call to get a list of rooms you are a member of, join a room etc.

The second part is the ability to issue commands to the bot, and have it respond.  For example "apic show pnp-projects".  This requires a webhook to integrate to the Spark chatroom (see https://developer.ciscospark.com/ for more information) All  SparkRoom  messages will be received by My-BOT server.  The steps are illustrated below: 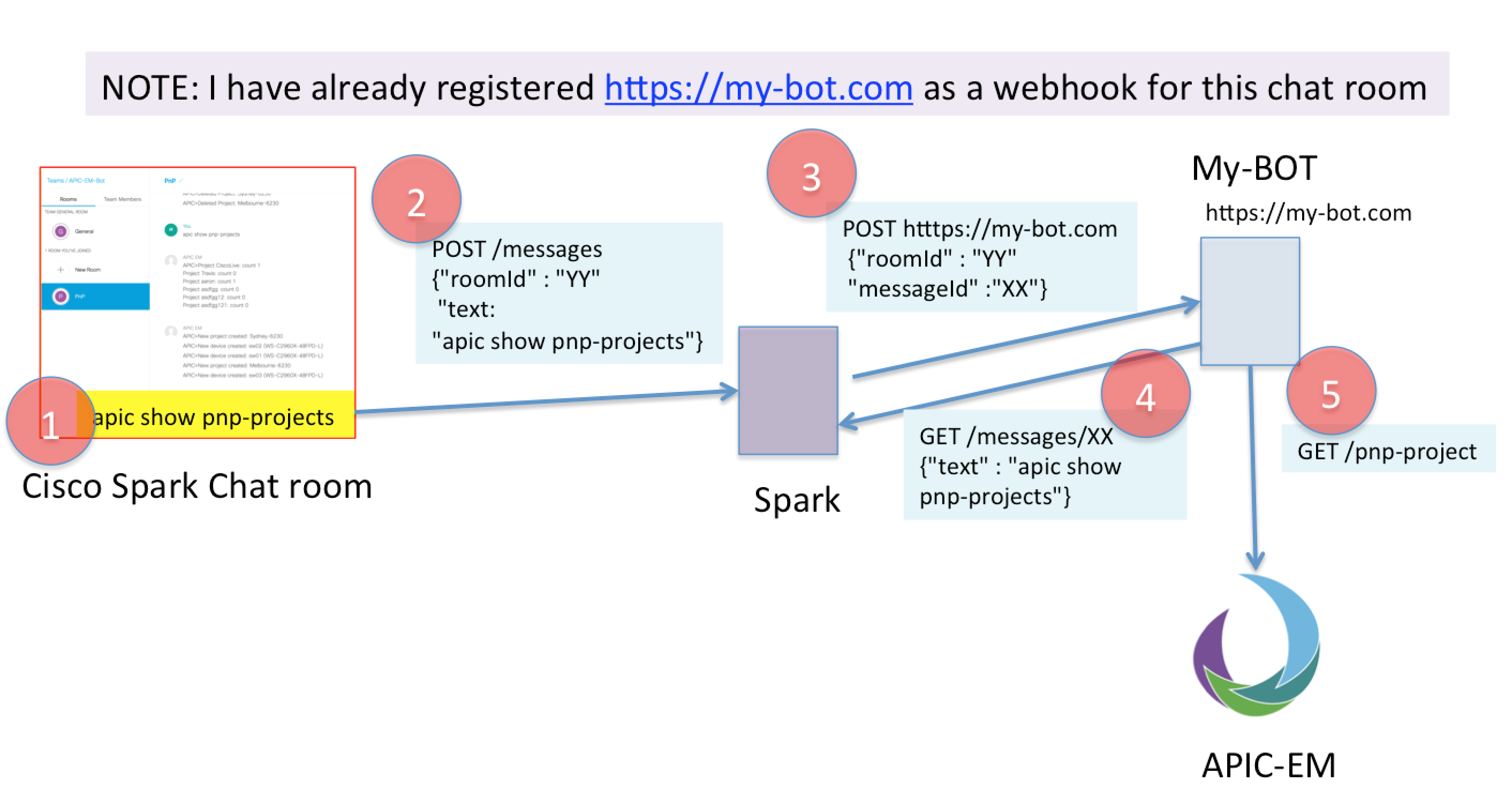 You then need to make an API call to spark to get the contents of the message (Step #4).

Next you need to process the messages, for example "apic show pnp-project".  This requires an API call to APIC-EM (step #5)

The function post_to_spark(message) described earlier can be used to reply to the spark room.

NOTE: ANY messages that are sent to the room (including the ones you post) will be sent to the chat-bot.  Make sure you do not auto respond to your own messages!  You will end up in a loop.

Self destructing EEM script in configuration

To address this problem, an embedded event manager (EEM) script can be put into the configuration file. This contains commands to be run after the configuration is downloaded.  To ensure it is only run once, you can tell the EEM script to "self destruct" i.e. remove itself after it has run.   The highlighted EEM commands below will:

This blog covered more advanced topics such as embedded EEM scripts in the day zero configurations, using a client library (uniq) to make the code more efficient and integrating all of the components into a single tool.  It also showed how the API could be used to integrate into a spark chat room (Thanks to Jose Bogarín for that idea)

In the meantime, if you would like to learn more about this, you could visit Cisco Devnet.  DevNet has further explanations about this. In addition, we have a Github repository where you can get examples related to PnP.

The EEM stuff is really cool. Would never have thought of it. Very useful.

Integrating Spark with APIC-EM is great. I'm still thinking about use cases for POST calls but for GET is quite nice. We are working in a project with a big rollout and we are working in this chat bot to allow the project manager to get the information that he needs without having to go to an engineer.

I don't know if it's a feature in the roadmap but I think that having some kind of webhook in APIC-EM would be great for a use case like this. For example I can register to a PnP event and trigger an action in the chat bot, or any other system for that matter, when a new device is configured.

I appreciate the comments.

Yes, we are looking to add notifications in APIC-EM.  Please "make a wish" to add support for this.  At present, the only way to do this is poll/store state... which is how i am doing it right now.

Thanks. As soon as I'm in front of the computer. I'll get to my APIC-EM and make that feature request.

Oh my god, just spent about 8 hours trying to isolate why my PnP configs were failing...VLANS!!! When I remove the vlans from my configuration, the configuration deploys with no errors as I would expect it would.

Is the EEM script to deploy VLANs the only workaround for this behavior? I can't believe the documentation doesnt mention this at all.

It depends on the mode that you have chosen for VTP.  If you are using VTP transparent mode, then the vlans will appear in the configuration file and you should be fine.

If you are using VTP, then there are different considerations.  VTPv1 is default, but many people use transparent mode.

Maybe I'm hitting a caveat then. On 9300 running 16.6 code, I cannot push VLANs using the nomenclature:

vtp mode transparent (or off)

With the VLAN statements present, i get a error 1410 in the PnP logs. Without them present, this process works flawlessly. Using your EEM script VLANs are added just fine, and VTP is also set fine with no EEM. It seems to me that MAYBE VTP isnt being properly set "in time" or "quickly enough" for the VLANs to be pushed properly.

I will chase down the root cause and update.

Thanks for the note about the blogs.  Just trying to help people out.

There is a long back story, but the short story is if you are running the latest PnP v1.5.1.35 - released 14th Aug

you will be fine.

We have separated out the PnP app from the base platform now. 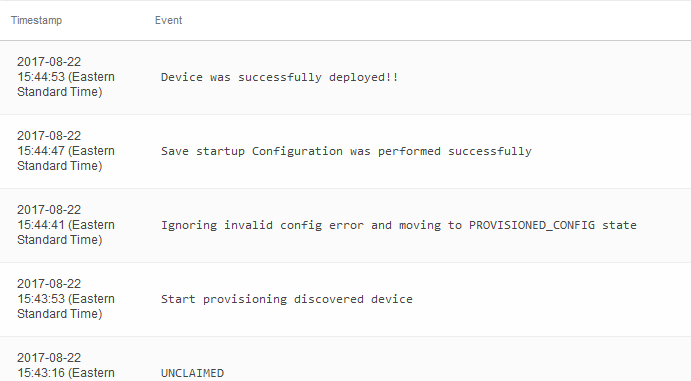 You need to have vtp mode transparent or off as well

Here is my config file.  Note: I need to have vtp in either transparent of off mode.

I'm a knuckle-head. My last mini-test after the PnP upgrade I forgot the VTP step, everything is working great.

We made some changes in 16.x around strict syntax checking for configuration files.  PnP1.5.1 will take that into account.  It is actually a false negative, but PnP will do the right thing.

BTW, if you are really keen, you should notice that it is actually the "name" statement that causes the issue in 1.5.0.  You should be able to push vlan if the do not have a name.

Latest Contents
Cannot open: https://devhub.cisco.com/artifactory/rpm-ydk/0....
Created by anthonyperry on 07-09-2020 02:44 PM
0
0
0
0
When installing YDK on Centos7 as root, I'm getting the following authorization errors:   # yum install https://devhub.cisco.com/artifactory/rpm-ydk/0.8.3/libydk-0.8.3-1.x86_64.rpmLoaded plugins: enabled_repos_upload, langpacks, package_upload, produ... view more
YDK models can't install because YDK requirement reports wro...
Created by vadigreg on 07-09-2020 10:51 AM
0
0
0
0
Hello, I need your help to set the core_version into setup.py. My JSON profile looks like this: { "name": "wireless", "version": "17.4.0.202006300937", "core-version": "0.8.4", [...] However the resulting setup.py inside the .tar.gz file shows: INSTALL_RE... view more
ACI App no longer able to download from iframe
Created by tmagill@convergeone.com on 07-08-2020 09:42 AM
0
0
0
0
I have an ACI App that has a download from CSV option.  At some point recently on both Chrome and Edge, this has stopped working but still works on Firefox.  Apparently, the iframe the app is embedded in is sandboxed and doesn't allow downloads.... view more
How to retrieve substatements using Path API?
Created by tadeshpa on 07-06-2020 12:37 PM
1
0
1
0
How can I find the substatements of a schema node? For example, if it is a configuration node or mandatory node? Or in the case of list nodes, how do I find the keys? I the script below, I can find out the keyword and argument for timer, but I can't find ... view more
removing configuration with ncclient
Created by Ugur Ersoy on 07-06-2020 05:55 AM
0
0
0
0
hello guys, somehow I couldn't figure out the way to remove existing configuration with netconf. I created xml template based on yang file static for xr 6.5.3 as follows: sr_config = ''' <config> <router-static xmlns="http://cisco.co... view more
CreatePlease login to create content
Discussion
Blog
Document
Video
Idea
Related Content
Discussions
Blogs
Documents
Events
Videos
Ideas
Content for Community-Ad
This widget could not be displayed.