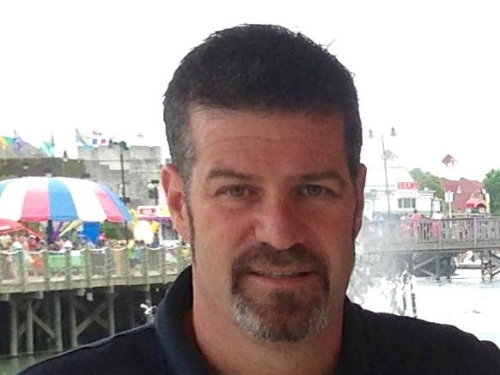 It is my opinion that network engineers are already doing some coding – even if they don’t realize it. Maybe it’s a little bit of a stretch. But, let me make my case. I think you will be positively enthused about your own abilities after you read this blog.

My very first lines of code were written in Basic on a TRS-80 computer in 1979. To be honest, I had no idea what I was doing. I was simply following the instructions to create a game and making sure I typed exactly what they said. It was really an exercise in following instructions far more than it was writing code. I didn’t start understanding coding until about 1981, when I switched majors from business to Math and Computer Science. Ever since then, I have, on and off, learned how to code in various programming languages. And, I would add that I have, over the years at Cisco, had the opportunity to dabble in network device configurations as well. And for me, I always looked at this as “programming the router configuration”. It all looks like programming to me. Let me explain why.

What all four languages have in common, at this most basic level, is that the code is “executed” one line at a time. In Basic and Python, there is only one line. When it runs, it puts “Hello World!” on the screen. In ANSI-C and Java, there is a little bit more code. There are some lines of code before the “print statement”, which set things up, and then the print happens. Each line of code is executed, one after the other, starting at the top. This is where we can find something in common with network device programming. 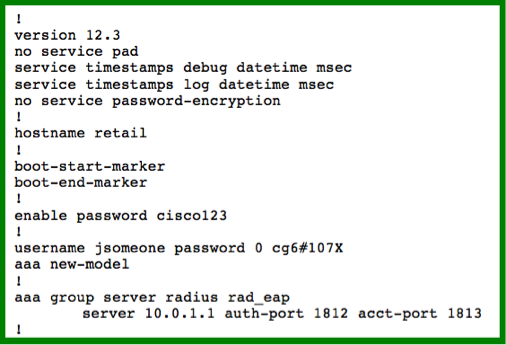 Above are the first few lines of output from a “show command” on a router. As a network engineer, this should seem insanely basic. I believe this is very much like writing software. When you put the router into configuration mode, you are editing your program. You are typing commands that you want executed. They are stored in the configuration file.

Configuration files are stored on the router, such that, when the router boots, it reads the configuration file and does what it says. For example, you can see the line of code, “enable password cisco123”. That is code for setting the router’s enable password to “cisco123”. In other words, when the router boots up and reads that line, it does precisely what you programmed. With some formatting exceptions, you could say that you are programming the router, to execute the lines of code, starting at the top and working your way down. That’s just like a basic software program – like “hello world”.

I am not going to tell you that you know how to program because you can configure a router. But, you are a long way further down the road than someone that can do neither. In application programming, we have things like “loops” and “conditionals”. But, those can easily be learned. A loop is simply where you tell the computer to execute a certain set of code repeatedly. Conditionals are simply “if/then” logic where you tell the computer something like, “If the user hits “Quit”, end the program.

If all this sounds interesting to you, let’s take it a step further. As network engineers, you already understand the basic concepts of programming and networking. I propose that you take a look at the Learning Labs for Network Engineers on Cisco DevNet. You will have to register to get in. But, that’s free and easy. Don’t forget to subscribe to the Cisco DNA Community of Interest while you register! When you get to the DNA Community, you may want to learn how to do some network configuration automation programming by reading Adam Radford’s blog on how to use PnP to make your job easier right now.

Latest Contents
Jinja2 Inputs YAML, JSON or Python dic
Created by Jerems on 07-05-2022 09:15 AM
1
0
1
0
Hi Guys, Do you agree with this statement :Does YAML or JSON offers better control on datas you pass to Jinja2 in opposition to a simple Python dictionary ?While writing this question i realized that we could consider of coding this control in the py... view more
vManage Event and Alarm logs extract
Created by hrmt92 on 07-01-2022 02:46 AM
1
0
1
0
Is there a way to extract the Event and Alarm logs from vManage for a long period like last 6 months? When i extract from the vManage, I get logs for a very short time since the row limit for the extract is 10000 and it is filled within very short time.
Docker images for Virtual Catalyst Switches
Created by mitshett on 07-01-2022 12:35 AM
2
0
2
0
Could someone help me to find where I can find the docker image of catalyst switch to bring it up as virtual device. Looking to bring up virtual device using docker image.
ENSA Final Skills Exam (PTSA)External tool
Created by aliqs95 on 06-25-2022 02:05 PM
0
0
0
0
Hi,Is there anyone who has completed the ENSA External Final Skills Examination (PTSA) instrument certification?I have some questions about the test
NETMIKO to cisco
Created by Dhikra Marghli on 06-24-2022 01:10 AM
4
0
4
0
Hello   I wantto use language python Netmiko  to add some commands to 400 router cisco !!   for me it the first time i use pyhon Netmiko   so    i have switch layer  2 2960 cisco have username admin and password admin123... view more
Ask a Question
Create
+ Discussion
+ Blog
+ Document
+ Video
+ Idea
+ Project Story
Find more resources
Discussions
Blogs
Documents
Events
Videos
Ideas
Project Gallery
New Community Member Guide
Related support document topics