If you saw my recent blog in infoworld you will have seen the rationale for on-box python and some of the use cases.  This blog series dives deeper into the python code for the example scripts I published.

You might recall I mentioned three use cases for on-box python.  Those are

Today I want to dive a little deeper into an example application for use case one which is scale.   We will take a look at the script, and more importantly how that script gets executed on the device.

If I have a “sanity” script that I need to run regularly and it takes six seconds per device * 1000 devices, that would be 6,000 seconds, or one hour and 40 minutes. I could run them in parallel, but that still consumes resources on my management station, processing the data. It also potentially transports lots of data back to the management station, only to discard much of it.  An alternative is to distribute the work to the devices and get them to provide an update when they’re done.

There are lots of examples of simple use cases for distributed processing on the device.

Here’s an example of a use case that I think you’ll find interesting. One of our customers had a PCI requirement to ensure that any switch ports that were unused for more than seven days were disabled. (This was to prevent people from plugging in unauthorized devices.)

The script looks at all interfaces on the switch, and those that have been inactive (no traffic send/received) for more than seven days are shutdown.   All interfaces that were shut down in a logged in a Cisco sparkroom.  The interface description is updated with a message indicating the time/date it was shutdown by the PCI-check application. 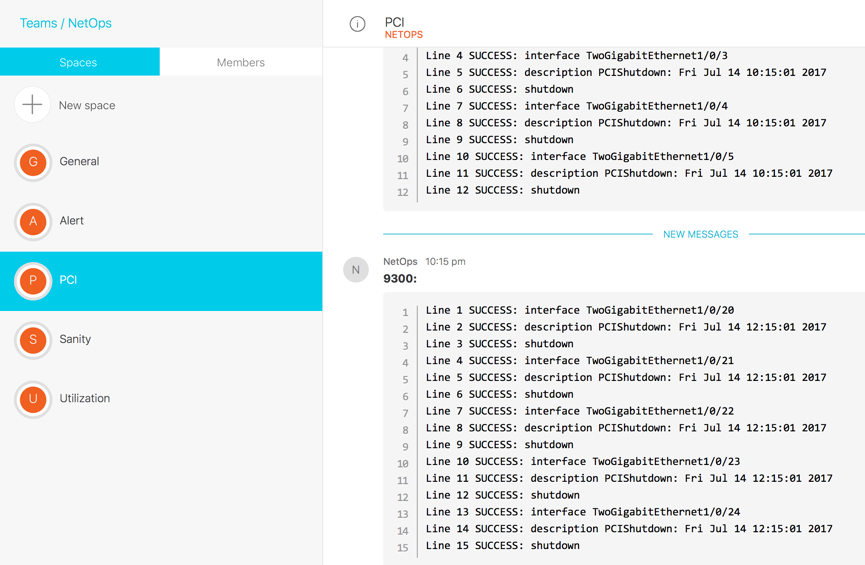 The code is published @  https://github.com/aradford123/on-box-python.git I will leave the details on how to install these to another post.

The first thing I need to do collect the current state of the interfaes.  I am going to take advantage of the inbuilt "cli" module on-box python to do this.  Here is a quick example from the Python REPL (Run, Execute, Print, Loop)

The next step is to parse the output.  I could look to use NETCONF/YANG except that last input/output statistics are not currently returned as operational data.  Instead I am going to use TextFSM to parse this using regular expressions. I will not go into the details of TextFSM here, but show you the definition in "show_int.textfsm".

to use this I need to load it, then apply it to the output of the CLI command.

I then apply the FSM to the output of the command, which will return a list of variables. I skip non Ethernet interfaces, I skip those that are already shutdown and if the "apply_change" flag is set (i.e. not in test mode), I add the relevant commands to a list to execute.

I can then apply the list of commands to the device.  Again I use the "configure" function from cli module.  This will execute a series of configuration commands and give me the output from them.

I can log the output to local syslog, and to spark.

The logging to spark is optional.  It requires an environment variable "SPARKTOKEN" (which is my authentication token) to be set.   This approach keeps sensitive information like my spark token out of the code.

To set the SPARKTOKEN variable, I could add the following line to my ~/.bashrc file in the guest shell.

How to run it?

To run the script, we’ll use the Embedded Event Manager.  EEM is a really powerful piece of IOS infrastructure that can be used to schedule the Python script to run.  The EEM cron job runs the Python script at 15 minutes past the hour, Monday to Friday.

This script can now be run hourly (instead of weekly). It’s a great example of scaling using on-box Python.

This blog post looked at simple scale use case for running Python scripts on-box in IOS-XE.  It is a deeper dive from my earlier infoworld article where I highlighted three categories of use case, namely:

The Embedded Event Manager is a powerful IOS tool that aids the execution of the Python scripts.  This use case takes advantage of the“Cron” or pre-scheduled mechanism for running a script. This is for scripts that need to run at a certain time of day, hour, week etc.  Other EEM mechanisms include countdown timer and event driven.

My next blog will cover the Security use case with a neat little DNS_update script to dynamically update an ACL based on DNS lookups.  It will use the "EEM Countdown" method to fire the script.

Thank you! This is very helpful! When will you be posting about use case 2 (Dynamic DNS ACL)?

sure.  There was a full version of the blog in info-world. https://www.infoworld.com/article/3208727/development-tools/how-to-use-on-box-python-scripts-for-cisco-devices.html

It has a link to the Dynamic DNS script. 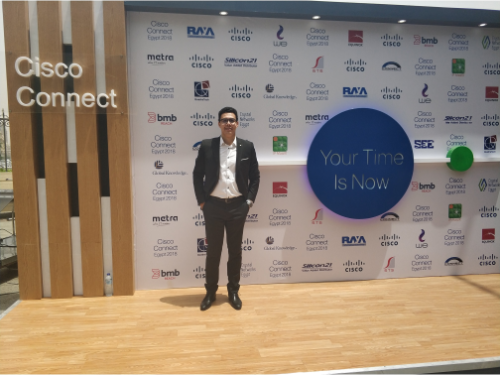 Did you tried the ZTP on csr1000v ? to lease ip from dhcp server on linux machine and download the python script over HTTP or TFTP to be executed by guestshell automatically ?

Hi Mostafa,  what version of code are you trying?  There was an issue in that http was not started automatically which meant guestshell could not start.  Engineering were working on addressing this.

which version of csr1000v is working normally  ?

We are still working on this for csr

@aradford can you please advice about the status with catalyst 3850 ?

Enthusiast
Do you know when guestshell will be available on the ISR1K devices please?
0 Helpful

Latest Contents
How can I create and diff snapshots in different VRFs
Created by d-fillmore on 06-05-2020 07:23 AM
1
0
1
0
Hi, I'm want to use the 'genie diff' feature to compare the routing tables of multiple devices between snapshots.The routing domain I'm interested in is on the global VRF on some devices and in a VRF on others. I'd hoped that I could specify the VRF withi... view more
PyATS (no Genie) connect with NETCONF
Created by vadigreg on 06-05-2020 03:03 AM
1
0
1
0
Hello, I want to configure my YAML to connect to NETCONF. I see that class can be set to yang.connector.netconf. However I'd like to use YDK-py. Is there a connector for that? Or any other way to use YDK?   Thanks.
YDK+PyATS
Created by vadigreg on 06-05-2020 02:35 AM
1
0
1
0
Hello, I'm from the EN wireless team in Cisco. I've tried to generate code for some of the YANG files we use in wireless and that seems to work just fine. So now I want to use Pyats (no Genie) to test programmability. Usually we have YAML defining our net... view more
IOS-XE restconf ACL issue
Created by y*** D*** on 06-04-2020 09:04 AM
0
0
0
0
Hi,This also applies to netconf.When router has ACL with ACE like permit tcp xxxx xxxx establish its not shown when doing get.ACE with permit tcp xxxx xxxx ack or other flag is shown when doing get.Checked with IOS-XE release 16.9.Any help appreciate... view more
ERROR - Data is invalid according to the yang model.
Created by datavailops on 06-02-2020 08:19 AM
2
0
2
0
Hi there, I'm using the YDK docker image, so I'm assuming that the software versions are correct, but regardless of the code that I write I get the following bunch of errors:2020-06-02 15:05:58,515 - ydk - ERROR - Data is invalid according to the yan... view more
CreatePlease login to create content
Discussion
Blog
Document
Video
Idea
Related Content
Discussions
Blogs
Documents
Events
Videos
Ideas
Content for Community-Ad