Cisco Community
English
Register
Login
COMMUNITY HELPING COMMUNITY - With your Community actions and contributions, we will donate up to $10,000 to UNICEF by end of January- PARTICIPATE
RegisterLogin
Turn on suggestions
Auto-suggest helps you quickly narrow down your search results by suggesting possible matches as you type.
Showing results for
Search instead for
Did you mean:
Announcements

What happens, when router receives packet?

When I was scanning the list of topics I had in mind for my first blog, I decided to start off by answering one of popular question that we initially get when we are introduced to the world of networking.

What happened, when router receives packet? 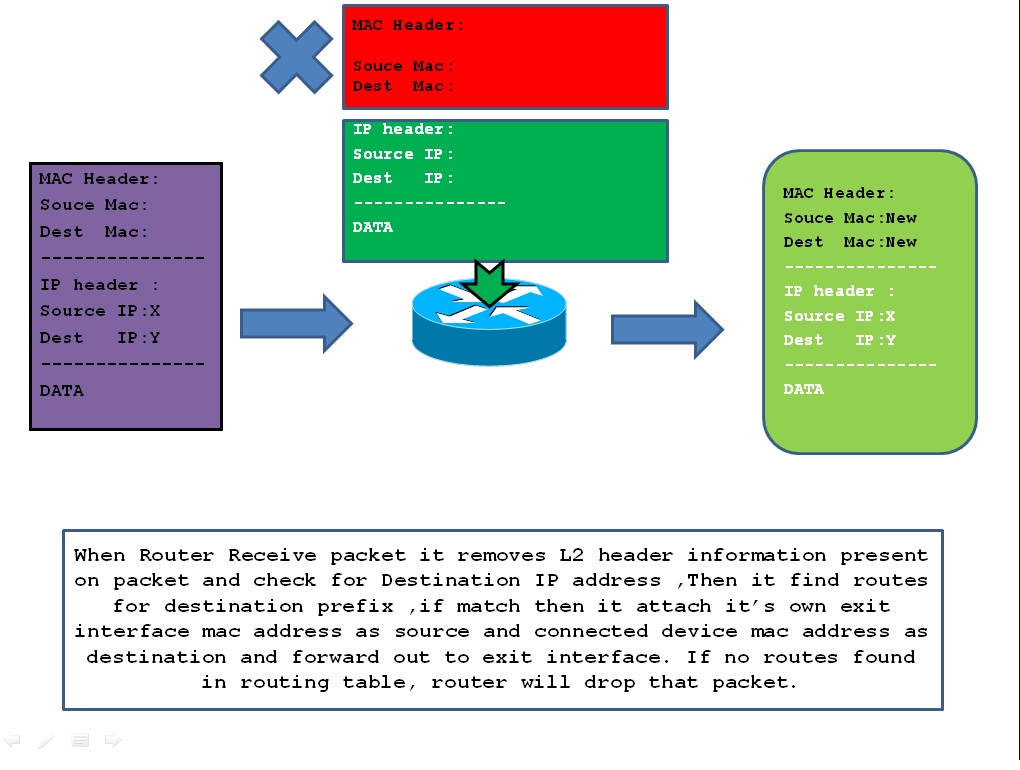 Upon receiving the Packet, router has to follow three generic steps before its routes the packets:

Let’s discuss each one of them in detail

Routing Process: Routing process is nothing but routers control plane. Router records a routing table listing what route should be used to forward a data packet, and through which physical interface connection. Router learns your network routes information either by static configuration or by using dynamically configure routing protocol like IGP (OSPF, EIGRP, RIP, IS-IS) or though Exterior routing protocol like BGP.

In above example when router does route lookup for destination address 1.1.1.1 out of 3 entries router will choose longest-prefix length match entry i.e. 1.1.1.0/24 , because destination address has most common bits matches with selected route and will forward packet out fa0/2.

->If there are multiple routes with same subnet mask learned via same protocol by router then router chooses lowest metric between them.

For Example: Eigrp use composite “metric” and Ospf uses “Cost” for comparison.

->If there is multiple routes with same subnet mask learn via different protocol on router then router chooses lowest administrative distance (AD).

->Last and important point is recursive lookup: which states that whenever there is route lookup more than once it will be termed as recursive lookup. It has to be done by router till destination address point towards any physical or logical interface.

We have a network 1.1.1.1 connected somewhere and we are reaching it by interface fa0/0 having next-hop IP address 2.2.2.2.So we can configure static route in two different ways either we can define next-hop IP address i.e.2.2.2.2 or we can mention interface number fa0/0 as gateway shown below.

To get more information on how static route work when you set gateway as Next-Hop IP address or to Next-Hop interface please refer this document.

-> Process switching requires the device CPU to be involved for every forwarding decision.

-> Fast switching still uses the CPU for initially packets and to fill cache table in router. Once initial packet has been forwarded, the information about how to reach the destination is stored in a fast-switching cache’s .when another packet going to the same destination, the next hop information can be re-used from the cache and so the router processor doesn’t have to look into it, but if the information is not cached the CPU will have to process entire packets.

In switching process device do actual packet link load balancing depending on the methodology we use.

Encapsulation process: L3 header will remain intact unchanged except for nating, vpn etc. layer 2 headers keep changing on hop by hop basis, depending on transmission media. For transmitting L3 packet on wire router need to find out l2 information for packets and it’s depending on the type of media we are using for transmission.

To explain encapsulation process in bit detail, I have created a small topology shown as below in diagram.

To generate some traffic, Lets ping from R3 to R2 interface address.As soon as R1 receives the packet from R3, It will remove the L2 information sent by R3 and check the L3 information that is source (20.1.1.2) and destination address (10.1.1.1) available on packet. Then it will look into its routing table to find out going interface i.e. fa0/0 in above example. Once router identify outgoing interface it will attach L2 header before putting the packet on the wire. So now R1 will attach its own interface Mac address as source and R2’s as destination mac address.

To get closer packet level overview, I have also attached some packet capture taken on R1's interfaces.

Well!!!! There ends my first blog and I think i managed to brief how routers handle the packet.

Thank you for reading and Hope that is informative

I have small doubt, But I would like to know, information like any packet reaches in Router what will happen.

2. L3 IP address will change if any NAT or VPN.

It will be greatfull to me if you clear my doubt.

3. Whether TTL field will decrements ?

4. Whether we change the FCS also ?

5. Or any field we are modifying ? 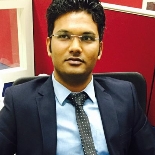 Please also explain about how and what things check first and last in networking when packet enter from layer 2 to layer 3 like: ACL, QOS, Natting, PBR, Routing...This king of information help to all for troubleshooting.

Where can i find such explanation for PPP/PPPOE incase of fixed network.

Thank you for reading and Hope that is informative

Very useful and informative basics. It was very helpful.

What happens when  router receive packet with not his MAC in Dest MAC field ?

Awesome one for the kick start of the New post. I really do appreciate for the detailed explanation whole heartedly as this is very much important to know and understand and also have the knowledge for everyone who are in the field of Networking.

Novice network engineer will have a good chance to understand about the  " life of the packet traveling from one place to another ".

If possible, Could you attempt the below:

Does two Different Vlans communicate with each other without any interference of L3 device or MLS switch ?

Query : Is communication possible between the two vlans without any L3 or MLS switch in between ?

Without MLS or L3 switch it is not possible to switch the packet between different bridge domain.

1. Fast Switching: how does the router knows if the destination network is already available in route cache? does that mean route cache lookup is done first

3. Yes TTL will decrement by 1,if the TTL  was  already = 1 when router received the packet it will discard the packet and reply the sender that TTL expired,which is the technique used by trace route to find the path taken by a packet.

4.Yes FCS will change aswell,think of FCS as same as checksum,every time a frame is forwarded from a different source to destination device it has to be new CRC check.

Hi, i'm new to this forum and i liked this explenation

please also explain (as hitesh lodh said) about how and what things check first and last in networking when packet enter from layer 2 to layer 3 like: ACL, QOS, Natting, PBR, Routing...This king of information help to all for troubleshooting.

In which order those features are processing

Thanks for your awesome explanation!

Latest Contents
Best Practice for Local SPAN on Cat 6800 VSS (w/ MEC source)...
Created by TomBowles71813 on 12-03-2020 12:19 PM
0
0
0
0
In order to avoid SPAN traffic from traversing the VSL, the 6500 VSS best practice guide says to use two separate monitor sessions, one for each chassis, sourcing the SPAN traffic from MEC member interfaces (not the Po int). However, the 6800 co... view more
IP address keeps disappearing!
Created by will73 on 12-03-2020 11:50 AM
2
0
2
0
I conducted wireless laptops and configured it, but every time I close the program the IP address are gone just for the wireless laptops, other devices IP's are there, does anybody know why?
Routers that support VXLAN
Created by BVC on 12-03-2020 11:44 AM
1
0
1
0
I'm currently trying to find out if the current routers I have (ISR 4221) support VXLAN. The routers won't let me configure a NVE interface so I'm assuming the routers don't support VXLAN, but when you look under the Limitaitons of VxLAN support on t... view more
Long ping in network and outages
Created by PavelBischoffi70604 on 12-03-2020 11:14 AM
0
5
0
5
Hello,I have a strange problem in one segment of our network. We have a cisco 6509E router and some switches (3750, 2960 etc) connected into this 6509 (The 6509 is the centre of star and switches are edges). Sometimes (once per day), occurs long ping... view more
PPPoE server doesn't work
Created by JaroslawPrzybyl10945 on 12-03-2020 10:19 AM
1
0
1
0
Anybody help me with configuring simple PPPoE server for lab purposes? I configured it on old Cisco 2800 router, important parts of config:! username ppp password 0 ppp archive log config hidekeys ! ! bba-group pppoe global virtual-template 1 ! ! inte... view more
CreatePlease login to create content
Discussion
Blog
Document
Project
Video
Related Content
Discussions
Blogs
Documents
Events
Videos
Projects
Content for Community-Ad