The following is a list of network services provided by switches:

The Gigabit Ethernet (or faster) switch port supports full-duplex traffic between the host and network switch. That eliminates collisions and creates a collision domain per port. The fact that there are no collisions increases data rate and decreases network latency for host connections. 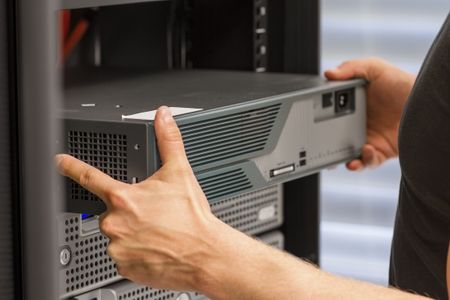 Every Ethernet network interface is assigned a unique manufacturer assigned physical hardware address called a MAC address. In addition, there is a MAC address assigned to all network devices. The MAC address provides a unique Layer 2 identifier. That enables communication between devices of the same or different VLAN. The switch forwards frames based on the MAC address and assigned port.

MAC (physical) address is 48 bits of hexadecimal numbers. The first 24 bits is a manufacturer OUI and the last 24 bits is a unique serial number (SN). There is a base MAC address assigned to each network device and unique MAC address per Ethernet interface.

The host then creates an IP packet with destination IP address of server, and frame with MAC address of default gateway. From there, router will send a proxy ARP broadcast on network to learn MAC address of a server on a remote subnet. ARP response is sent from server with MAC address to router that forwards onto host. All ARP tables are updated per Layer 3 hop between source and destination.

The following summarizes what happens when a host sends data to a server for an already established network session.

2. The switch does a MAC address table lookup for the server destination MAC address and forwarding port. The packet is forwarded to router if server is on a different subnet than the host.

3. The switch floods the frame out of all switch ports except the port where the source MAC address was learned. This only occurs when the destination MAC address is no longer in the MAC address table.

4. The local server with the matching destination MAC address responds to the switch with a frame that has server source MAC address.

5. The default gateway would respond to L2 switch with server MAC address from an ARP table lookup if the server is on a remote subnet.

6. The switch then updates MAC address table with MAC address of server and forwarding port.

The store-and-forward method is traditional switching where the frame is not forwarded until all of the frame has arrived. The switch copies the frame to memory before examining the destination MAC address.

CEF is a layer 3 switching technique that creates FIB and adjacency tables for optimized data plane forwarding. It is only available on routers and switch platforms with routing enabled and the required hardware. There is a FIB table derived from the RIB table with next hop address so that control plane is not involved.

Layer 2 switches only read the frame header within a data message to make a forwarding decision.

Refer to the network drawing where host-1 is sending data to server-1. The destination MAC address is not in the MAC address table (unknown). The switch will unicast flood (learning) the frame out all ports except the port where the frame was learned from (Gi1/1). 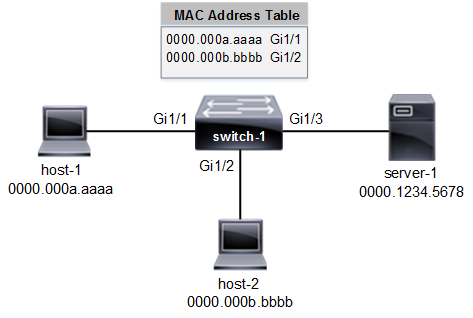 Server-1 with the matching destination MAC address receives the frame and sends a frame to switch-1. The switch then updates MAC address table with the MAC address of server-1 and associated port (Gi1/3). 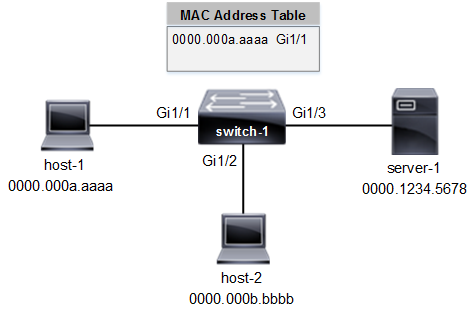 Refer to the network drawing where host-2 is sending to data to server-1. In this example, switch-1 will examine the incoming frame from host-2 arriving on port Gi1/2. The switch will do a MAC table lookup based on the destination MAC address (0000.1234.5678). The destination MAC address is assigned to server-1 and frame is forwarded out switch port Gi1/3 associated with server-1. 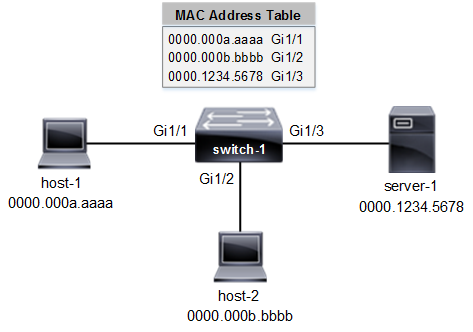 Nice write up, but if you are going to plagiarise someone else's work verbatim, at least have the decency to reference the source material:

Actually, as it's not really easy to know Cisco community member "CiscoNet Solutions" is "Shaun Hummel" (?) and the original author of this material, in particular.

In a way, Seb's "accusations", are really trying to do you a service, not a disservice, as Seb is really trying to protect you, i.e. the original author, from someone else using your work, appearing to be their own.

Seb is not helping or protecting anyone. It is wrong to make hasty public accusations. If he has a concern, then start with asking me where the information was sourced since it is posted somewhere else. I would be happy to straighten him out. It was posted at a notorious exam dump web site.

Thank you Shaun for this great document, we appreciate you sharing your excellent content in Cisco Community.

Excellent Representation, for Mac_forwarding at layer 2 , making it easy to understand ,

and explain to others , thank you.

Latest Contents
ASR1000 Netwflow export over SCTP
Created by Peyman Zadmehr on 07-04-2022 01:13 AM
0
0
0
0
Hi,We are going to implement Flexible Netwflow on ASR1002X and we want to use the SCTP protocol for Exporting the Data. We wonder which IOS XE version supports the SCTP protocol? We checked several IOS from 15.4 to 16.09 but the feature was not supported,... view more
I'm Beginner for SD-WAN, I want to understand the SD_WAN.
Created by kumardhanjay007 on 07-03-2022 11:42 PM
0
0
0
0
Hi Sir,I am Beginner for SD-WAN, I want to learn and practice on this, Please, give pdf file and video clip to learn and practice. Thanks & RegardsDhananjay Kumar9899232293
RV345 Frequent disconnection for VPN.
Created by buffy1289 on 07-03-2022 11:36 PM
2
0
2
0
Hi, need some help. Would anyone have any idea what could cause frequent disconnection of VPN for RV345? Was not able to see what is the cause from the logs. Have to reboot it. Suspect could be due to cpu/memory resources not being released properly ... view more
Route Processor (RP) VS CPU
Created by Raoof on 07-03-2022 10:34 PM
4
0
4
0
is there any difference between the two terms? and speaking about the old 1st,2nd ISR ex (2800,2900), are the CPU and RP physically seperated ? or it is all about seperated functions where the RP is where the routing processes take place ?  Than... view more
Understanding data flow in vEdge
Created by interfacedy on 07-03-2022 09:38 PM
0
0
0
0
Hi vEdge1 and vEdge3 are connected like first below picture. After vIOS1 send extend ping to vIOS3, we got data flow info from vManage like the below second and third picture.  We get data flow info from vEdge01 and vEdge02 via vManage as below:... view more
Ask a Question
Create
+ Discussion
+ Blog
+ Document
+ Video
+ Project Story
Find more resources
Discussions
Blogs
Events
Videos
Project Gallery
New Community Member Guide
Related support document topics