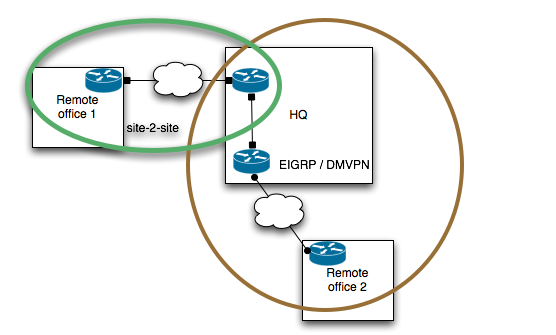 The HQ office has also a IOS router 2921 with a DMVPN connection an other Remote offices.

The problem is. I can ping from

on the cisco asa HQ i've configured EIGRP and on IOS router 2921 and 888 the DMVPN connection i've also configured EGRP.

For the VOIP is also an other router an 2851 which has EIGRP and static routes for the voip connection to the remote office 1.

Eigrp is used to get to the remote office 2.

I don't know where to look I think self i've to look at the Cisco asa configuration ( site-2-site tunnel ) and not to the DMVPN configuration?

Hope some one has an idea.

Latest Contents
Agile Networking with Cloud-managed IT
Created by Calvyn Lee on 06-13-2021 07:33 PM
0
0
0
0
Agile Networking with Cloud-managed IT [Meraki The Future is here] Cisco Meraki The Future Is Here: Agile Networking With Cloud-managed IT Your customer’s employees are in hybrid workstyle from home, the road, and the office and IT teams need t... view more
Smart License Using Policy - FAQ
Created by Pradeep Chaudhari on 06-09-2021 10:11 AM
0
0
0
0
1. Smart Licensing 1.1. What is Smart Licensing? A. Cisco Smart Licensing is a flexible licensing model that provides you with an easier, faster, and more consistent way to purchase and manage software across the Cisco portfolio and across your orga... view more
Connect to any cloud, anywhere, securely, Cisco DNA
Created by Calvyn Lee on 06-01-2021 11:18 PM
1
10
1
10
Cisco DNA - Cisco SD-WAN: Connect to any cloud, anywhere, securely  Cisco offers on-prem and cloud-managed WAN edge solutions to meet these new demands. Connect any user to any application with integrated capabilities for multicloud, security, ... view more
Future Cloud. One Event. A world of opportunities.
Created by Kelli Glass on 06-01-2021 02:33 PM
0
0
0
0
Join us for this virtual event as cloud providers, integrators, ecosystem technology partners and customers discuss what tomorrow's cloud will be and what you need to know to prepare. Get ready to hear about innovations for faster operations, mult... view more
STP - Spanning Tree Ptorocol
Created by ericnet on 05-27-2021 05:23 PM
4
0
4
0
Let´s talk about spanning-treeLeave your comment in english and in your own language.------------------------------------------------Vamos falar sobre spanning-tree Deixe seu comentário em inglês e no seu idioma.
Create ContentLogin to create content
Question or Discussion
Blog
Document
Project Story
Video
Related Content
Discussions
Blogs
Documents
Events
Videos
Project Gallery
Content for Community-Ad