Cisco Community
English
Register
Login
RegisterLogin
Options
Turn on suggestions
Auto-suggest helps you quickly narrow down your search results by suggesting possible matches as you type.
Showing results for
Search instead for
Did you mean:
468
Views
10
Helpful
10
Replies
Highlighted

I found the following lines on the Cisco website, Which not clear to me

can anyone explain this?

"if the CEF lookup process failed to find a valid entry in the forwarding information base, the packet is punted to the next available switching path or dropped."

My question is when a packet arrives at the interface what is the result if there is no entry for the destination in the FIB table?

-->Punted to the next slowest switching method? (for ex: punted to RP for process switching)

-->Punted to the next slowest switching method? (for ex: punted to RP for process switching)

R: I think that is dropped.

Look here a overview about: https://www.petri.com/cisco-express-forwarding-cef-overview

Participant
In response to Jaderson Pessoa

Thanks for the reply

I agree with the sense of dropping the packet. because the FIB would always have complete information about RIB, so there is no use of sending the packet to the Route processor only for route lookup.

But if you see on the Cisco website which I mentioned above, they said packet can be punted to the route processor.

so why is the discrepancy with cisco for us?

As I'm preparing for the exam what should I believe?

You need consider other charactheristics about Cisco information, for exemple:

"With an incomplete adjacency, CEF considers that the router as a whole (including all the other switching paths) does not know how to get to the adjacent node. We punt packets to process switching in order to kick off some resolution protocol like Address Resolution Protocol (ARP),"

"Only packets that match a glean adjacency are punted to the Gigabit Routing Processor (GRP). In addition, on the GSR, the LC CPU does not punt packets to the GRP for features, and the LC sends an ICMP unreachable (as long as the no ip unreachables command is not configured). On the GSR, the only traffic punted to the GRP are packets destined to an interface on the router or packets sourced from the router."

A punt occurs under these conditions:

In other words, normall is drop the package. For your studies, you should consider the conditions.

VIP Collaborator
In response to sivam siva
if you an mark as solved will help other people found it easier.
Jaderson Pessoa
*** Rate All Helpful Responses ***
0 Helpful
Reply
Highlighted

Participant
In response to Jaderson Pessoa

Thank you for the reply

I raised a question for the words from the cisco website,

got the same lines as an answer in your reply (sorry)

I understood the concept of CEF, and I agree that dropping the packet after FIB lookup (if the destination is not there in FIB) makes sense.

If someone can ensure this with a valid cisco link or any other official sites would be very helpful for me.

Again thank you very much for your response and time 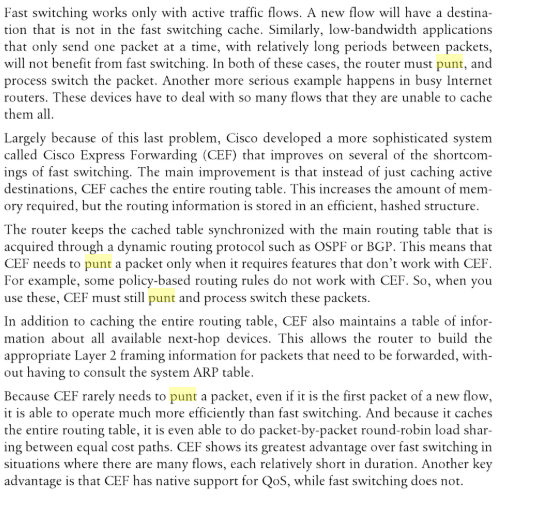 I have raised a question from this Link only, please see my original question in which I already attached this link.

I just want to ensure the device can only drop the packet when it can't find destination in FIB. (please let me know if you find any like this)

There are many reference talking about what i told to you.