Cisco Community
English
Register
Login
RegisterLogin
Options
Turn on suggestions
Auto-suggest helps you quickly narrow down your search results by suggesting possible matches as you type.
Showing results for
Search instead for
Did you mean:
354
Views
5
Helpful
5
Replies
Highlighted 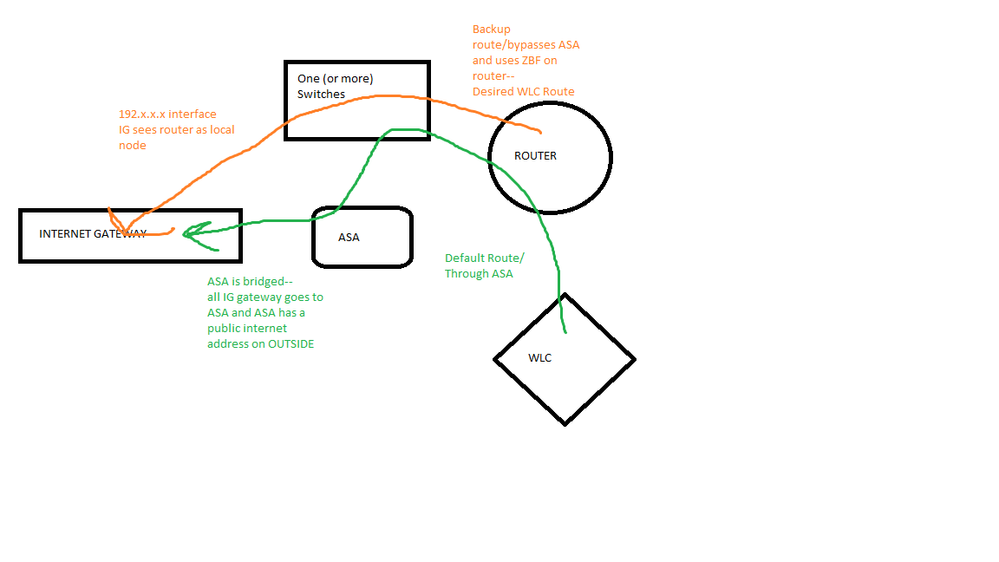 Alright guys, I've been scratching my head about this one for a few weeks and I'm hoping I'm just making a simple PBR mistake and someone can help me out.

As you can see (hopefully) all the traffic from my home network goes through my ASA. That's all well and good, but my wifi traffic SHOULD go through the Zone Based Firewall and straight out to the internet. I have some webcams and echos that do IoT things that the ASA does *NOT* like at all (I get enough trouble from my WLC for trying to run multicast packets). The ASA is breaking some of my appliances, and it should be easy enough to redirect all traffic from the ASA out of the ZBF and have it bypass the ASA entirely. Default route to 0 goes to the ASA with an AD of 5. There's a second static route out of the gateway with an AD of 6 for failover.

Some details that may matter:

The PBR that I've tried so far, plus or mins a few variations:

I set a MATCH parameter and a next hop that anything coming from 172.32/16 has a next hop of the ISP gateway, completely avoiding the ASA.

ALL my APs go dead instantly.

I suspect that this is killing the connection between the WLC and the APs when I apply the route-map to 172.32.0.1 on the router. I suspect I need an ACL that I'm applying to my policy needs an exemption for traffic that's both to and from 172.32/16, or just to the 172.32/16 subnet but... I have no idea what that ACL or PBR would look like. I suspect it would look something like this:

(I know that's not a perfect transcription but I'm not in my lab at this moment).

Does anyone have any experience splitting traffic to/from a subnet with a different default route? Setting up VRF seems excessive, and I'd rather still be able to access my WLC from other subnets for management. I feel like I just can't figure out the ACL/PBR logic (I've had zero luck figuring out how to get a match that then "does nothing") and if I could get the packets flowing correctly... well, that's what everyone's here for anyway, i guess. Currently my options are to run everything out the ZBF by changing the AD (so I might as well sell my ASA), or deal with broken wifi IoTs (so I might as well sell my WLC) and... neither of those should be true, i should just be able to figure out how to run the traffic.

Any help would be greatly appreciated and happily voted up. Thanks.

Try and have two stanza rules The first rule will deny policy routing for any traffic to-from wlc matching on an permitted acl, if this traffic flow isn't correct then append it to suit what traffic you DONT wish to be policy routed from that subnet

can you post the full running config of the ZBF router ? Is the wireless a separate zone ?

I can post the full running config in a few hours. The wireless is not a separate zone, there are only 2 zones in the network, inside and outside. All inside traffic has the same trust level and is allowed to travel anywhere. All subnets are in the same zone.

Try and have two stanza rules The first rule will deny policy routing for any traffic to-from wlc matching on an permitted acl, if this traffic flow isn't correct then append it to suit what traffic you DONT wish to be policy routed from that subnet

I guess it had never actually occurred to me to use a "deny" statement in a PBR entry--I've literally never done it and even forgot it was an option. None of my googling lead me to believe a PBR deny would force regular route-logic. I guess I slept through that chapter.

and all traffic to or from 172.32.32/24 (DHCP Scope for Wireless Clients) to a PBR "permit" with my backup gateway as the line out

--Worked like a charm! This has seriously been plaguing me for weeks, not to mention just making me feel like an idiot for not being able to figure it out. Once the Route-map was showing positive matches I put an ACL on the interface out to the gateway and made sure my wireless connections dropped--all connections to the internet died, but connections to the local WLAN stayed up, exactly the behavior I wanted!

I guess when you run a WLAN (not a wireless guy so much), you don't want to interfere at all with the traffic on your WLC. My assumption was that the traffic flow went APs-->WLC-->Router-->Internet, and in reverse, but any attempt to enforce a policy based route on the management subnet causes instant catastrophic failure. I'm not sure how packet exchange works on the subnet (are the APs hitting the router before the WLC? Why would they???) but I've learned a valuable lesson about leaving the WLC/AP subnet alone--it's outside my expertise anyone.

I only explain on this, Paul, in case anyone one runs into a similar problem and finds my post. That information could have saved me a boatload of time and headaches. Thanks for typing this in the rain for me!

I am glad to hear you have now got it working as you wanted, and thank for your feedback to the community and the rating - Very much appreciated.

Latest Contents
Command comparison Cisco and ICX Ruckus Switch
Created by Santosh Shetty on 09-18-2020 06:07 AM
0
0
0
0
Following document covers command comparison between Cisco and ICX Ruckus.
Register Now: Networking CCP Briefings for New Product/Relea...
Created by Kelsy Tibshraeny on 09-17-2020 02:02 PM
0
0
0
0
Coming soon - Be the first to know about the New Product/Release Series. Join Customer Connection to register for the briefings throughout the month of October! Membership in the Cisco Customer Connection program is required to attend. Registra... view more
Issue with flexvpn ikev2
Created by Hulk8647 on 09-17-2020 11:03 AM
0
0
0
0
Hello,I am trying to configure FLEXVPN on an ISR 4321. I have followed the directions in the below article. Upon completion, when trying to log into the VPN via anyconnect, I am not getting anywhere at all. (not prompting for UN/PW) I hope someone can she... view more
Cisco IOS XE Amsterdam 17.3.1a: Enterprise Routing Release U...
Created by pkhilola on 09-16-2020 04:37 AM
3
5
3
5
On 16th Aug 2020, Cisco has published the latest IOS XE Release- Cisco IOS XE Amsterdam 17.3.1a.   IOS XE 17.3.1a continues to enhance the Enterprise Routing offerings. There are key software feature enhancements covering Lic... view more
RV340 VPN processing order
Created by georgedei on 09-15-2020 06:10 PM
1
5
1
5
I'm trying to understand the order in which site-to-site VPN traffic is processed. Is there a block diagram of the entire router structure? Do the packets pass through firewall before the VPN or after the VPN process? What exactly happens to ports of pack... view more
CreatePlease login to create content
Discussion
Blog
Document
Project
Video
Related Content
Discussions
Blogs
Documents
Events
Videos
Projects
Content for Community-Ad