Cisco Community
English
Register
Login
RegisterLogin
Options
Turn on suggestions
Auto-suggest helps you quickly narrow down your search results by suggesting possible matches as you type.
Showing results for
Search instead for
Did you mean:
703
Views
4
Helpful
4
Replies
Highlighted

routing through a public ip subnet

I have the folowing scenario on which I would like to have you insights.. 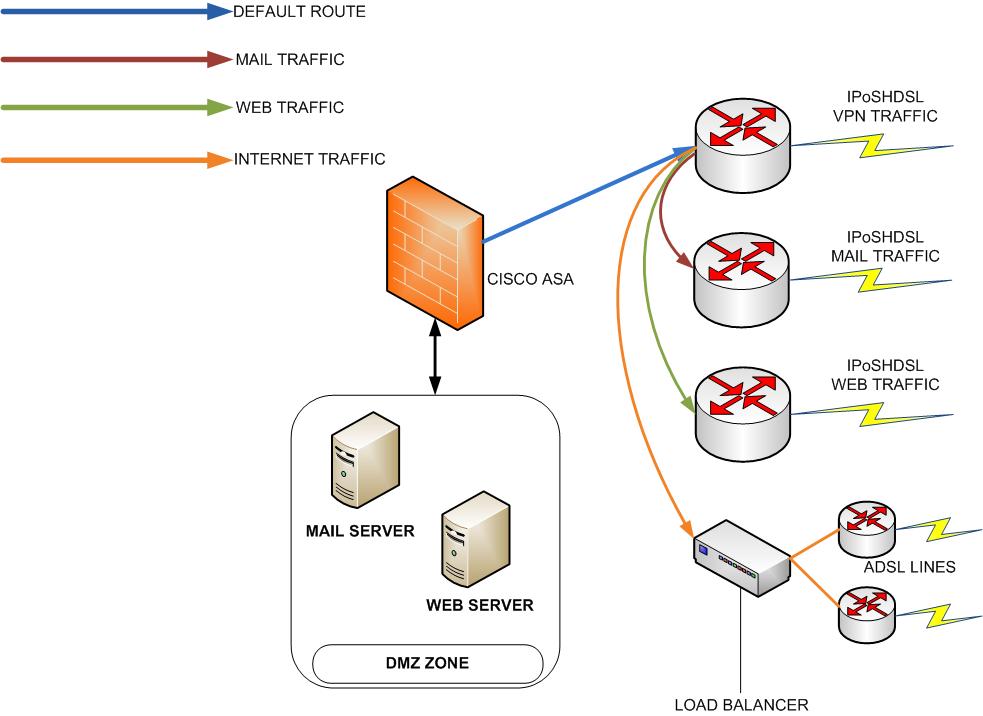 The problem I am having is that the network/subnet between the ASA and the routers (coloured lines) use the public IP addresses of the VPN router.

Hence the outgoing traffic from ASA to the mail router is getting lost in the middle.

Can anyone share their opinion on this? How can I make the outgoing emails go through?

You said you were using PBR on the VPN router so i would have though the return mail traffic gets to the VPN router (because that is the default route on the ASA) and then you use PBR to send it back to the mail router.

Is this not happening ?

All the routers have LAN interfaces configured in the public ip subnet of the VPN router.

The incoming mails are hitting the mail router and are correctly directed in (NATed on ASA).

I believe that the outgoing mails are being routed to the VPN router (default route), but there, since the LAN interface of the mail router is in the public IP range of the VPN router, the traffic is getting lost. Result = no outgoing mail.

Incoming requests to the web server are also OK. I think these are stateful and ASA knows where to return HTTP/HTTPS requests.

I do not know if I am explaining well ...

A default route with the "tunneled" keyword out the VPN router only for VPN traffic did also not help.

Which of the two scenarios is feasible according to you?

Hall of Fame Guru
In response to Vijendra Ramdoo

I believe that the outgoing mails are being routed to the VPN router (default route), but there, since the LAN interface of the mail router is in the public IP range of the VPN router, the traffic is getting lost. Result = no outgoing mail.

Perhaps some IP addressing would help but i don't see how the above is a problem ie.

1) the mail server private IP address when going to the internet is changed to a public IP.

2) on the VPN router you use PBR to match that public IP as the source IP in an acl and redirect it to the mail router ie. back out of the same interface.

Whether the VPN router will do this ie. redirect back out of the same interface is not definite ie. i have seen it work and also not work.

Thanks for your help. So the fact that the LAN interfaces of the routers is public should not be a problem. Hummm

I will hence re-check the configuration on client's site and update this thread.

I was worried that the return traffic was being lost in the other pulic IP range since ...errr... it's plublic

Regarding the other scenario where the "tunnelled" keyword is used for another default route to the VPN router (which is on a separate interface on the ASA).

Do you think that's plausible?

Latest Contents
Cisco IOS Router + ACL to Block Website URL
Created by RS19 on 09-29-2020 10:55 PM
1
0
1
0
I have Cisco IOS router which is used configured for Internet access for users.The router acts as DNS server & also the name-server in configured. The router is also configured as DHCP server.Also 1 particular VLAN say VLAN 100(192.168.100.0/24) is al... view more
Networking Products Overview (Fall 2020)
Created by Kelli Glass on 09-25-2020 02:47 PM
0
0
0
0
Welcome to the overview guide that covers the latest in Cisco Networking innovations and new product introductions. You'll find information on promotions and free trials, as well as exclusive upcoming product deep-dive sessions in the Networking and Data... view more
Allowed List Policy Considerations for SD-Access
Created by faylee on 09-24-2020 04:48 AM
0
0
0
0
(Pdf copy at the bottom) Overview SD-Access Segmentation Segmentation within SD-Access is enabled through the combined use of both Virtual Networks (VN), which are analogous to VRFs, and Cisco Scalable Group Tags (SGTs).  VNs, like VRFs, provide comp... view more
Do you blog, vlog or podcast? The 2020 IT Blog Awards now ac...
Created by aalesna on 09-21-2020 01:25 PM
0
0
0
0
The 2020 IT Blog Awards, hosted by Cisco, is now open for submissions through October 16. Submit your blog, vlog or podcast today. For more information, including category details, the process, past winners and FAQs, check out: https://www.cisco... view more
3064PQ 10GX performance question
Created by blackmetal on 09-21-2020 11:33 AM
0
0
0
0
Hello,We have a pair of N3K-3064PQ-10GX and one of them acting as backup and we want to migrate from VyOS to it, we want to add 500x interface vlan and each interface vlan has its own ip/prefixes (for example /30 /29 ...) and we ahve 6-8x BGP session with... view more
CreatePlease login to create content
Discussion
Blog
Document
Project
Video
Related Content
Discussions
Blogs
Documents
Events
Videos
Projects
Content for Community-Ad