We had a Cisco stacked 3750 as our core/distribution in a collapsed model and we replace it with 2 Cisco Nexus with vPC/HSRP/OSPF/static ip route summarization taking over the core/distribution role and also hosting our VMWare ESXi and SAN. However we never move our WAN/VPN and internet edge routers backbone connection to the new Nexus core/distribution switch. Our edge WAN/VPN internet routers consist of Cisco, Vyos (on DECISO hardware) and UBNT Edge Router Pro.

Labels:
Preview file
255 KB
I have this problem too
0 Helpful
Reply
2 REPLIES 2

Your new setup shows dual connections from all your WAN devices which you could just as easily do on your 3750s if you wanted to.

Either way just make sure you have dual connections from both and you would have the redundancy you need.

Participant
In response to Jon Marshall

New setup as follows with the default ospf cost however I did adjust the OSPF cost on the SVI interface. I know OSPF supports equal-cost load balancing but shall I leave them as default ? i.e SVI ospf cost will be both 40 on both Nexus. I've got HSRP setup on the SVI's with 2 of the 8 VLAN's dedicated my servers and the other VLAN's hosting clients and other stuff. All hosts in these VLAN's uses the  SVI's HSRP IP address as their gateways

Wont I create any routing issue between my remote hosts and clients connecting to the servers ? 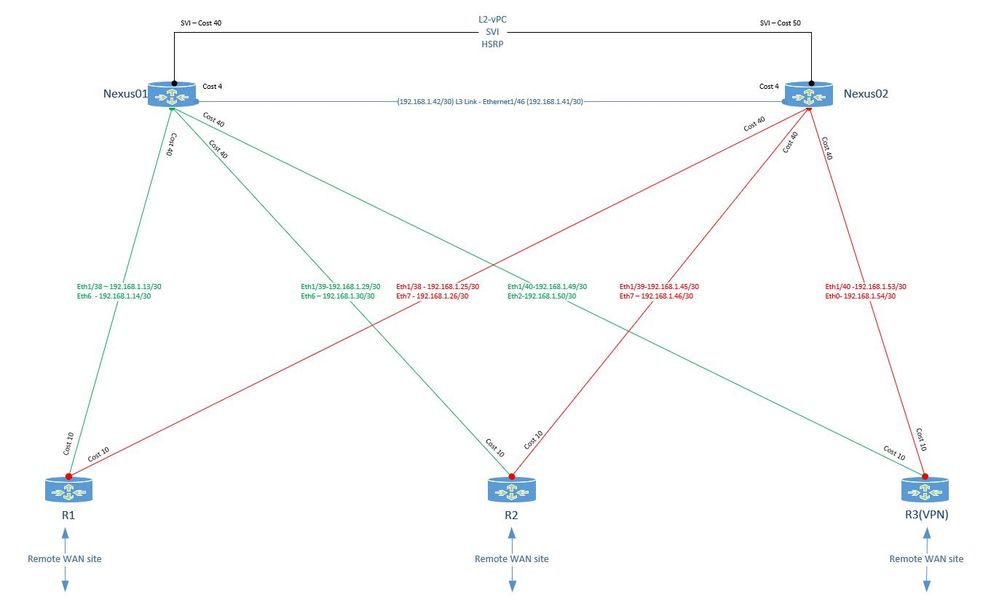 Latest Contents
Cisco IOS XE Bengaluru 17.5.1a: Enterprise Routing Release U...
Created by Pradeep Chaudhari on 05-09-2021 09:36 AM
0
0
0
0
On 16th April 2021 Cisco recently announced availability of the latest release on the IOS-XE train – IOS-XE Bengaluru 17.5.1a. This is the 2nd one in the Cisco IOS XE Bengaluru release series, IOS XE 17.5.1a unlocks various routing features and ... view more
New to IPv6? Better understand it with this 7-part blog seri...
Created by greghami on 05-06-2021 02:58 PM
0
0
0
0
New to IPv6? Trying to wrap your head around concepts like IPv6 addressing, solicited-node multicast, and just how, exactly, does all this work without ARP? Never fear, Fish Fishburne is here to help with this blog series she wishes had been out there whe... view more
Cisco IOS-XE 17.5.1 Switching Release – What’s new?
Created by ndiwakar on 05-05-2021 09:12 AM
0
0
0
0
Cisco recently announced availability of the latest release on the IOS-XE train – IOS-XE 17.5.1. This is a standard maintenance release supporting Switching, Wireless, SP-Access, Routing as well as IOT (Internet of Things) platforms wi... view more
How to determine a legitimate hardware issue - Support Talks
Created by ciscomoderator on 05-03-2021 01:46 PM
0
5
0
5
Support Talks- How to determine a legitimate hardware issue (Live event -  Thursday 13 May, 2020 at 9:30 am Pacific/ 12:30 pm Eastern / 6:30 pm Paris) This event will place on Thursday 13th, May 13 at 9:30hrs PST  Register today for this Suppor... view more
Cisco DNA Center Ask the Experts Resources
Created by vivichia on 04-27-2021 08:38 PM
0
5
0
5
Thanks for attending our Ask the Experts (ATXs) sessions! Here’s the post-session resources for easy reference. New to ATXs? An ATXs session, offered at no cost, is an hour of real-time learning led by Cisco experts, who will answer your technology quest... view more
Create ContentLogin to create content
Question or Discussion
Blog
Document
Project Story
Video
Related Content
Discussions
Blogs
Documents
Events
Videos
Project Gallery
Content for Community-Ad