The Visual Networking Index (VNI) Global Mobile Data Traffic Forecast for 2012-2017 is part of the comprehensive Cisco VNI forecast, an ongoing initiative to track and forecast the impact of visual networking applications on global networks. The new study includes projections for worldwide and regional mobile data traffic growth, device and M2M proliferation, top mobile networking trends and their implications on service provider wireless infrastructures, consumer services, and much more. Here are some of the key findings:

In 2012, 14 percent of mobile devices and connections were potentially IPv6-capable. This estimate is based on network connection speed and OS capability.

In 2012, the number of mobile-connected tablets increased 2.5-fold to 36 million, and each tablet generated 2.4 times more traffic than the average smartphone. In 2012, mobile data traffic per tablet was 820 MB per month, compared to 342 MB per month per smartphone. 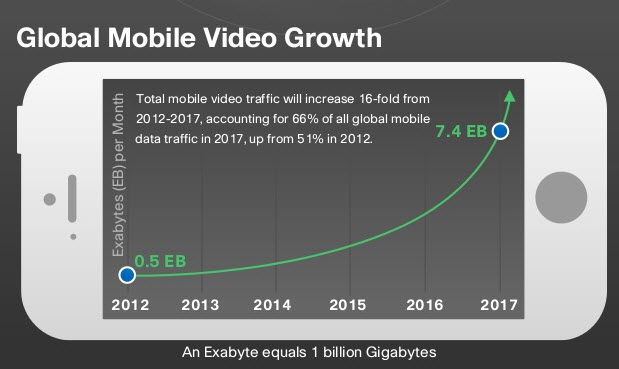 The Mobile Network Through 2017

Mobile data traffic will reach the following milestones within the next five years.

● The number of mobile-connected devices will exceed the world’s population in 2013.

● The average mobile connection speed will surpass 1 Mbps in 2014.

● Due to increased usage on smartphones, handsets will exceed 50 percent of mobile data traffic in 2013.

● Monthly mobile tablet traffic will surpass 1 exabyte per month in 2017.

● Tablets will exceed 10 percent of global mobile data traffic in 2015.

The average smartphone will generate 2.7 GB of traffic per month in 2017, an 8-fold increase over the 2012 average of 342 MB per month. Aggregate smartphone traffic in 2017 will be 19 times greater than it is today, with a CAGR of 81 percent.

Latest Contents
Buy American Act
Created by Techman2021 on 05-14-2021 06:50 AM
1
0
1
0
Does anyone know if Cisco SFP's or Cisco hardware in general is Buy American Act Compliant?
xconnect
Created by vin.marco on 05-14-2021 02:19 AM
8
0
8
0
Hi guysI have to configure an xconnect between a PE with ios XR version and a PE with ios XE version.The scenario is as follows:  I have 2 switches that have vlan, in this case 100, which must communicate through an MPLS network.The MPLS network... view more
VPNV4 label allocation
Created by dfauluchi on 05-13-2021 02:16 PM
10
0
10
0
Hi! I have a question about label allocation. I can't figure out how can I controll this behavior. I have a few PEs, all of them ASR9010.There's one that allocates a new local label for each vpnv4 prefix it receives from RR, even if label mode p... view more
BNG bundle load balancing
Created by Vladimir Pysarenco on 05-12-2021 10:57 PM
0
0
0
0
Hi all!! We are using ASR9001 for BNG. It's connected to ASR9010 with bunble 4x10G.To police users traffic correct, on BNG bundle subinterfaces this command it presented: bundle load-balancing hash dst-ipThis is for users download. For upload we... view more
NSR Disabled on standby RP
Created by jon_panes24 on 05-12-2021 12:59 AM
0
0
0
0
Hi, there are these syslog message that we occasionally get on our XR router with regards to BGP NSR going down on the standby RP. When we check the BGP neighborship or BGP NSR related commands were not seeing any flaps or anything unusual. Any parti... view more
Create ContentLogin to create content
Question or Discussion
Blog
Document
Project Story
Video
Related Content
Discussions
Blogs
Documents
Events
Videos
Project Gallery
Content for Community-Ad