The basic configuration for netflow consists of an

and a sampler map.

The Flow monitor MAP pulls in the Exporter map

On the interface you want to enable netflow on, you pull in the monitor map and the sampler map.

! cache timeouts define how frequently we export what, max of 1M per LC

! these 2 define the exports of the sample map and interface table to theflow collector for sync'ing indexes

Netflow is not hardware accelerated in the ASR9000 or XR for that matter, but it is distributed.

What that means is that each linecard individually runs netflow by itself.

Resources are shared between the interfaces and NPU's on the linecard. 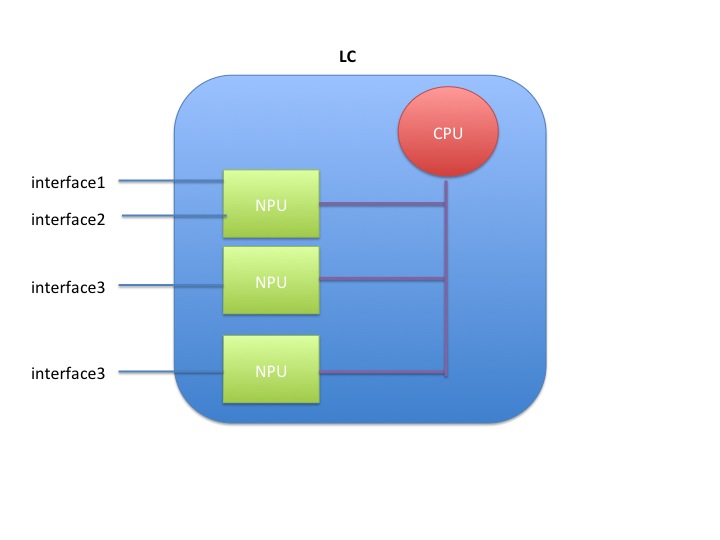 When you have 1 interface to one NPU on one linecard enabled for netflow, the full rate is available to that interface, which is 100k pps for trident and 200k for typhoon.

When you enable 2 interfaces on 2 different NPU's, then both NPU's share the total rate of 100k/200k amongst them giving each NPU 50k or 100k depending on the LC type.

•Once they pass through the sampling policer, the ucode extracts data from the header fields and sends to LC CPU to construct a flow record.
•The LC CPU sends the flow record to netflow cache on the LC.
•The flow records remain in the LC cache untill they are aged due to either timer expiry or cache exhaustion.
•There are two timers running for flow aging, the active timer and the inactive timer.

Inside the LC CPU 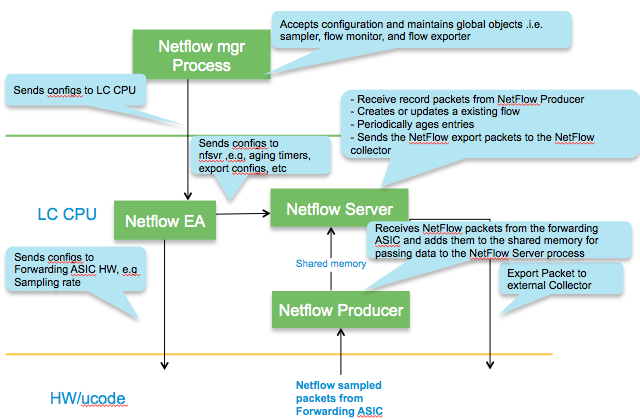 In IOS-XR platforms, it is the LC processor memory that holds the netflow cache.

NetFlow Cache is a Section of memory that stores flow entries before they are exported to external collector.

The ‘nfsvr’ process running on the linecard, manages the netflow cache.

The memory used can be monitored via this command:

The memory used with the cache size of default 64k entries for ipv4 & MPLS is about 8MB & for ipv6 is about 11MB.

If ‘n’ ipv4 flow monitors are used all with maximum 1M entries, the memory used would be n x 116 MB.

Configuration to set the cache entries to ten thousand looks as follows:

95% of configured cache size is the high watermark threshold. Once this threshold is reached, certain flows (longest idle ones etc) are aggressively

The show flow monitor FM cache internal location 0/0/cpu0    command will give you the data on that:

this syslog message means that we wanted to add more entries to the cache than what it could hold. There are a few different reasons and remediations for it:

- the cache size is too small, and by enlarging it we can hold more entries

- the inactive timeouts are too long, that is we hold entries too long in the cache not getting aged fast enough

- we have the right size cache, and we do export them adequately, but we are not getting the records out fast enough due to volume, in that case we can tune the rate limit of cache expiration entries via:

Note that the permanent cache uses a different template when it comes to the bytes and packets.

Number of flows : Total number of unique flows going through the interface in a given time period.
Cache timeout values : In general, the longer the timers, the larger the needed cache size. Short timers dictate that most records will be removed due to aging.
Average flow duration : The longer the average flow duration, the longer the timers that are needed, and thus the larger the cache.
Sampling Rate : Lower the sampling rate (i.e. lower the X, for 1:X), more flows would be populated in the cache and hence larger cache size is needed.

All packets subject to sampling, regardless or whethe they are forwarded or not are subject to netflow.

This includes packets dropped by ACL or QOS policing for instance!

As described in the architecture section, the total sampling capability depends on the number of interfaces having netflow enabled.

It shaped up to be something like this table:

All packets that exceed this rate are dropped by the punt policer.

You can verify that by the controllers np counters command.

The _EXCD depicts that the police rate had been exceeded.

This means that you likely have to increase your sampling interval.

Export occurs when data in the cache is removed which can occur in one of three ways.

The netflow exporter can be in a VRF, but can not be out of the Mgmt Interface.

Netflow records can be exported to any destination that may or may not be local to the LC where netflow is running. For example, LC in slot 1 & 2 are running netflow & the exporter may be connected to an interface reachble via LC in slot 3.

A total of 8 exporters per MAP is allowed.

Export protocol only supported is Netflow v9 over UDP.

Ø Cisco netflow mib is not supported.

A few nice enhancements have been added to netflow recently:
- ability to tune the rate-limiting for cache expiration (see above for more detail)
- bgp attribute download for full AS-PATH and communities (need to configure bgp attribute download)
- visibility on the phyiscal member used for this record on a bundle or mpls TE tunnel (needs outphyint config on the monitor map)
- ability to see which interfaces are using this flow monitor map. this is handy in case you need to modify the netflow config and have a list of all intfs using the map.
- and yes :) we are working on an inline modification too :)

Great article on XR Netflow, I appreciate the detailed information. Using the record mpls ipv4-ipv6-fields option will I be able to export flows tunneled through a l2vpn vc?

On a separate topic, do you have any information on XR CBQoS SNMP support? I find this feature very useful in IOSto monitor interface policy-map utilization and I am having trouble finding support specifically for CISCO-CBP-TARGET-MIB in XR.

Jon, thank you! We cannot apply netflow to L2 circuits, only to L3 enabled interfaces, that is interfaces of the non l2transport kind and should have an ip address associated with it.

You said that the netflow exporter can be in a VRF, but can not be out of the Mgmt Interface.

If we use out of band management and the destination is behind Mgmt Interface,  is there any workaround solution? What version code you refer to?

Hi Judy, the netflow destination must be found via a fabric enabled interface (that is an interface on a linecard).

This is irrespective of the code as this is defined by the implementation of LPTS.

I think we are talking about different things. Using the example configuration above, you mean the interface

0/0/0/20, I was asked you the interface to forward records out. I guess I misunderstood.

aha I see Judy: yeah the 0/0/0/20 is a fabric interface on a linecard that runs netflow, as it is getting sampled.

The netflow exporter, that is the address of the netflow collector in your exporter map, that one has to be found via a fabric enabled interface also and cannot be routed out the mgmt interface.

(netflow runs on the LC and the LC can inject the export records just fine, but since it is attached to the fabric it cannot *route* through the mgmt interfaces on the RSP.

I just found the follow tips at Cisco Netflow documents.

"We recommend that you do not use the management interface to export NetFlow packets. Exporting the

management interface does not work efficiently."

yeah it finally got added properly to the official documentation. Although I dont like the wording: "it is not recommended", it should say it doesn't work...

Netflow on ASR9001 has all the limitations of a single Typhoon LC. Did I get it right?

So all limitations you read about a MOD80 typhoon linecard will apply to an ASR9001 also.

When highwater mark is exceeded, recommendation is to increase cache, with a trade-off in respect to straining LC memory. Would a safer option be to increase sampling interval ?

when you reach the high watermark it starts aggressively aging out flows to create room for new ones.

The lowering sampling interval when there is a high variety of flows would potentially temporarily mitigate the situation, but statistically, we'd still be capturing flows at a lower sampling rate too, so your cache may not fill that quick as it did before, but there is still a chance of.

The trade of here to be made is:

Increase cache: will allow more flows at the expense of shared memory that is used by other functionality and features

Thanks a million Xander !

Is there a best practice safe recommendation at this point ?

That's difficult Samir, it is very much dependent on your other shared mem needs, and how much cpu you're willing to use for this functionality and the desired accuracy. Then the flow distribution you have is also very much important factor in this:

eg if you have 2 datacenters interconnecting, then the distri is not that large so you can live with a much lower sampling rate. Also because these flows tend to be longer lived hence netflow will see them.

Internet access will see a lot of flow distris and short lived, requiring a potentially higher sampling rate, getting more samples up and requires more memory for those flows.

To give 2 basic "profiles":

use case: to get an "idea" of traffic:

use case: accuracy and detail:

generally there is no problem setting the cache size to 1M.

It is about 250 bytes per flow or so. If you dont have amssive arp scale or high qos profiles, then this may work easily.

I am on a CRS and expect a conservative cache increase to be relatively safe.