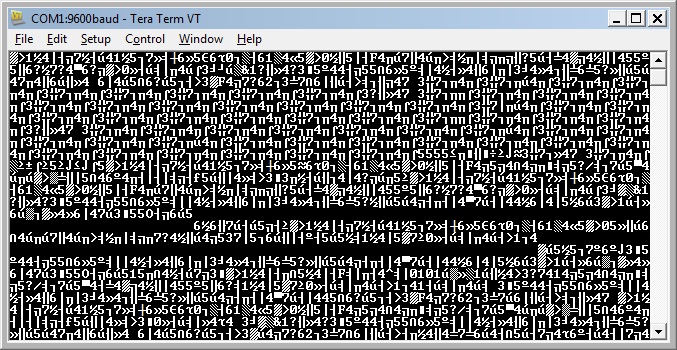 Hi guys, i am literally new to cisco devices and am planning to take the certifications however life as we know it already threw me a curve ball and that is what you are seeing on the picture.

this was working perfectly until i first decided to reset the password using the instructions from the cisco website. after rebooting and saw the initial configuration dialog box, i decided to call it a night. and continue the next day. hence when it booted voila, a screen filled with jiberish.

settings are as follows 9600  8 n 1, tried 3 different console cables and it still displays the same thing.

i was wondering if anyone can help me fix this issue. the device is out of warranty and someone told me its fixable without having to send it to cisco.

thanks in advance for the help!

Labels:
Everyone's tags (10)
1 person had this problem
I have this problem too
0 Helpful
Reply
1 REPLY 1
Highlighted

That kind of gibberish characters is usually the sign of a mismatch between the speed setting of the terminal emulator software and the setting of speed on the console port. You have given us the settings of your emulator software. And since originally you were getting correct readable output from the console we know that the router was originally set to speed 9600. But I am guessing that somewhere in your password recovery, or perhaps in the initial config dialogue something was done that changed the router console speed. I would hope that this can be fixed without requiring that it be sent back to Cisco.

My first suggestion is a long shot, but may be worth a try. See if you can connect to the aux port. In some configurations you may be able to sign in on the aux, get to enable mode, and check and fix the speed setting of the console - mainly by making sure that the config register is set to 0x2142 or to 0x2102. But if the config were erased or if the router is still trying to enter the initial config dialogue then the aux will not work.

My second suggestion is to try setting the speed of your terminal emulator to various speeds. I would start down at 1200 and work up from there trying each of the available speeds up to 115K. Be aware that some emulators, such as Hyperterm, may require that you stop and re-start the emulator to make the new speed effective. This may be tedious to do, but I believe that you will find one of the speeds will re-establish successful communication with the console port.