just thought I'd share with you a peculiar effect we have noticed at our Academy, where lots of people are often erasing and saving configs.

What happens is that the router will reply with

Unfortunately due to ignorance (or whatever), many students just hit enter and BANG, they have deleted the IOS! Which means I spend many hours doing XMODEM on our 18 classroom routers...

My question: Why would you want to erase the 12MB IOS file in flash only to save a small text file in NVRAM???

Is this a fluke of this particular IOS version or is it a "feature"? Incidentially, if you say "no" to the above [confirm], the file gets copied without erasing the flash: first and it then appears as an ordinary file when you do "dir flash:". Why does the startup-config file not appear in a "dir flash:" listing?

Any insights would be greatly appreciated. 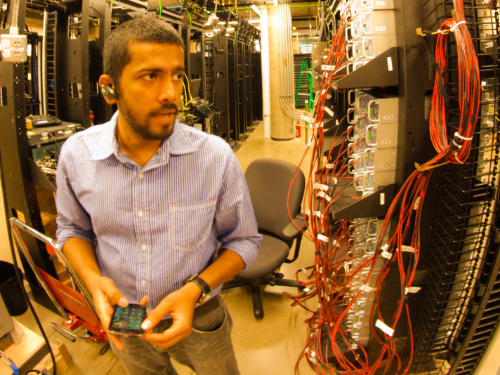 startup-config file is not stored by default in flash, unless you save it manually to flash. Startup config file is stored in NVRAM which is a separate chip.

I can tell you that most routers ( i dont remember if there were any exceptions, there could be)..that I have dealt with behave the same way. You have to be carefull about pressing a "n" to not erase the flash before copying..

For example..you want to download via TFTP a second IOS image to flash (assuming you have enough space)..When you type the command to copy, it prompts you to Confirm erase of flash and you have to press a "n" so that second file gets copied to the flash.

Keep a copy of the reload procedure around, and have the student reload the router - several kinds of education there (reloading, and "Be careful how you respond")

Keep a copy of the most basic IOS version available for your routers around ... frequently ~2-3 meg in size, tops

When you need to reload, XMODEM the small / basic image in, then use that to TFTP the larger image in. Time-wise, you're almost always way ahead of the game ( especially in the event of transmission errors / timeouts / etc in the Xmodem transfer).

I also have a script (and now a microcontroller project) to do password recovery almost automatically (need to manually power cycle). When it's done, the password is reset.

We had a lot of engineers walk away from their Labs with passwords in-place (that, of course, they can't remember later on).