Cisco Community present at Cisco Live EMEA 2023. See you in Amsterdam! Learn more.
Turn on suggestions
Auto-suggest helps you quickly narrow down your search results by suggesting possible matches as you type.
Showing results for
Search instead for
Did you mean:
Create a new article
Options
81336
Views
20
Helpful
5
Comments 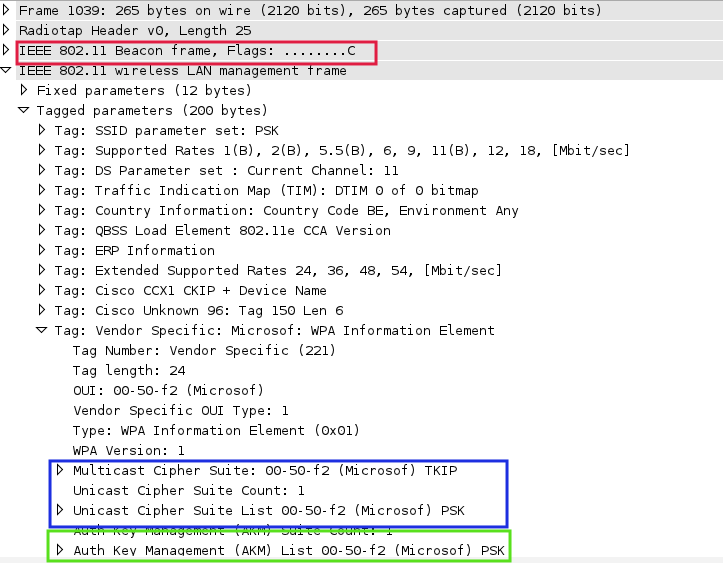 2.     Probe request, is sent by STA to obtain information from AP: 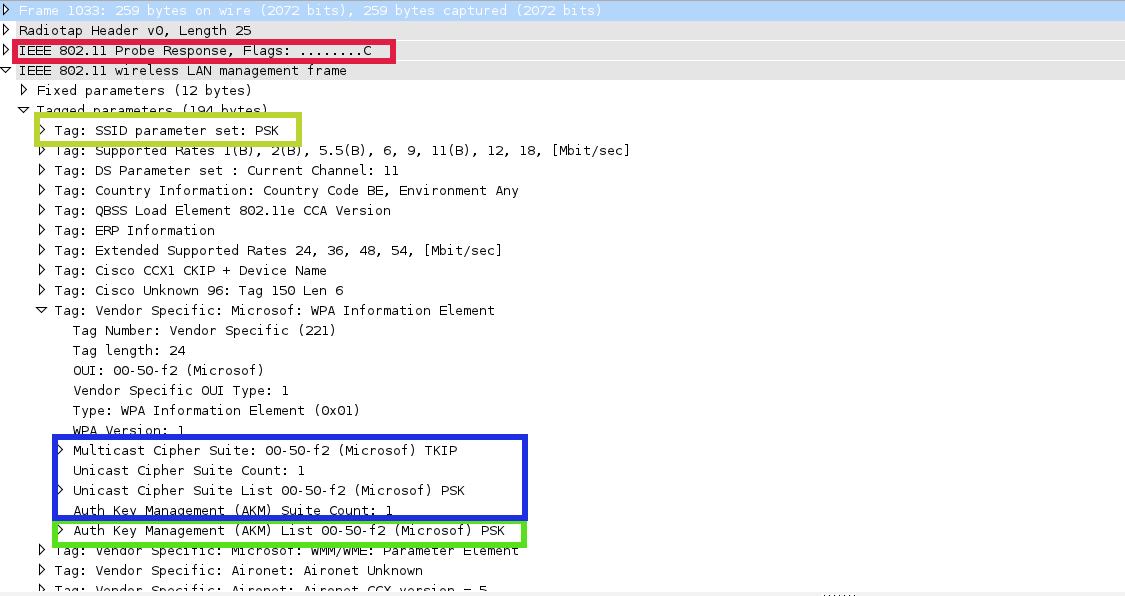 802.11 association enables the access point to allocate resources for and synchronize with a radio NIC. A NIC begins the association process by sending an association request to an access point. This frame carries information about the NIC (e.g., supported data rates) and the SSID of the network it wishes to associate with. 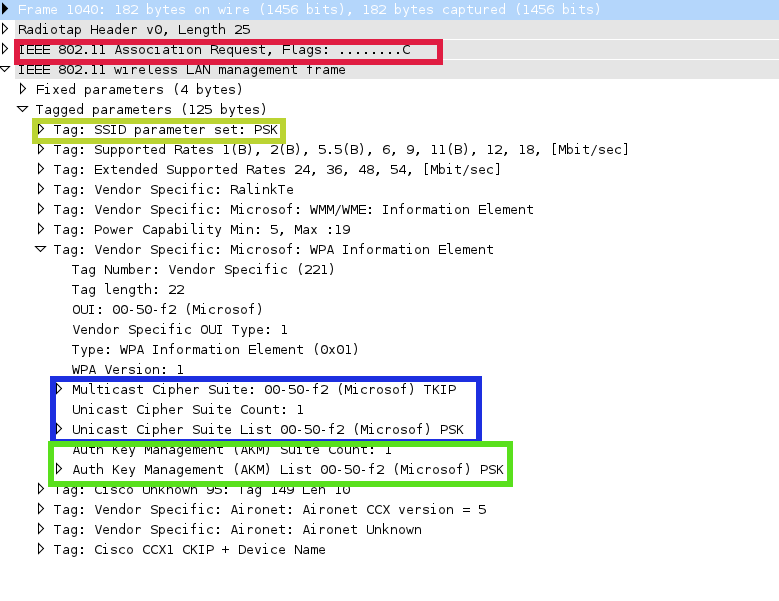 After receiving the association request, the access point considers associating with the NIC, and (if accepted) reserves memory space and establishes an association ID for the NIC.

6.      4-way handshake, during this phase PTK is created, PSK is used as PMK to construct those values:

a.       AP sends 802.1x authentication frame with ANonce, STA now has all information to construct PTK:

b.      STA responds with 802.1x authentication frame with SNonce and MIC: 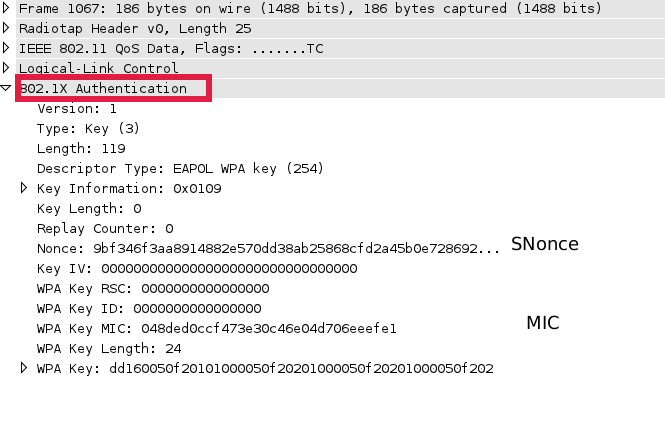 c.       AP constructs 802.1x frame with new MIC and GTK with sequence number, This sequence number will be used in the next multicast or broadcast frame, so that the receiving STA can perform basic replay detection: 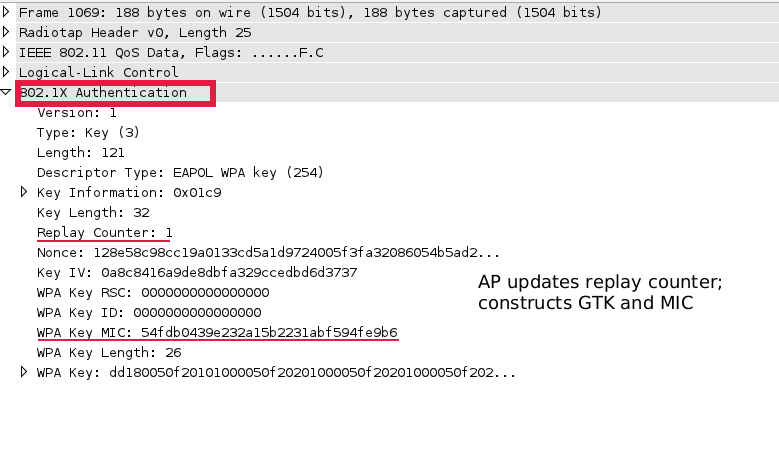 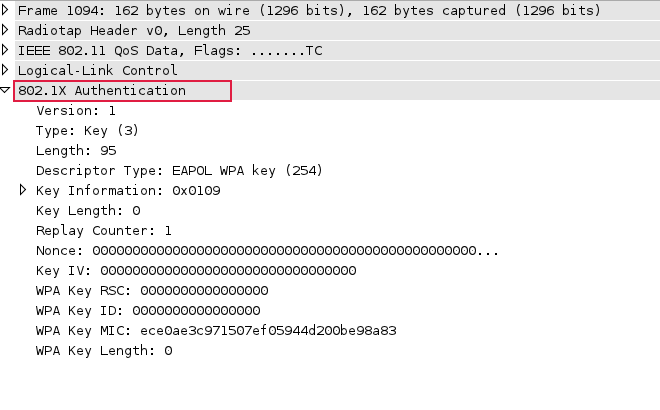 From that point all data is sent encrypted.

The process if fairly the same as in previous section, I’ll highlight only information that is different.

1.      WPA2 AP management frame include RSN element that included unicast cipher suite, AKM information and GTK cipher suite (if both AES and TKIP are selected, then less stronger encryption method will be used for GTK). 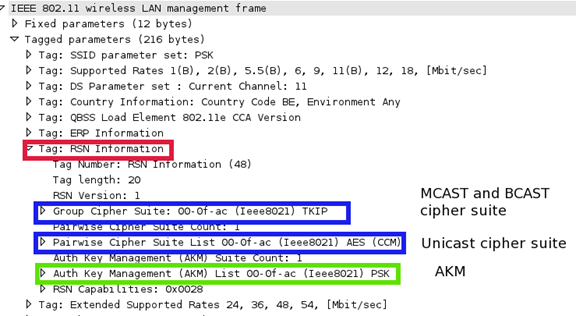 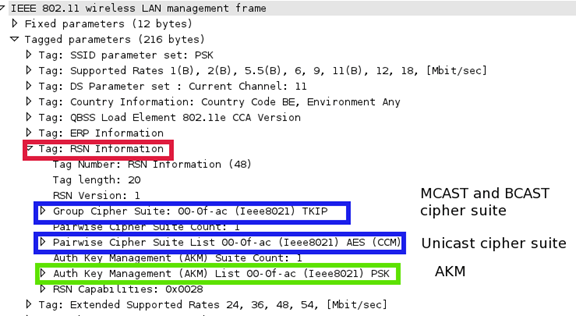 Note: you can decrypt WEP/WPA-PSK/WPA2-PSK encrypted wireless traffic if 4-way handshake key exchange frames are included in trace and PSK is known.

Note: In order to filter out WLAN traffic from specific STA in wireshark you could use “WLAN Statistic” option.

In order to filter traffic from specific STA go to “Statistics -> WLAN Traffic”, from the list of SSIDs select corresponding SSID STA is associated with, and apply filter based on the STA. 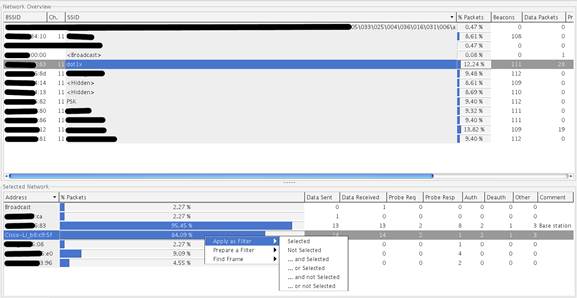 This process follows the same steps like previous except for the AKM method and deriving PTK/GTK and AP advertised attributes in 802.11 management frames. 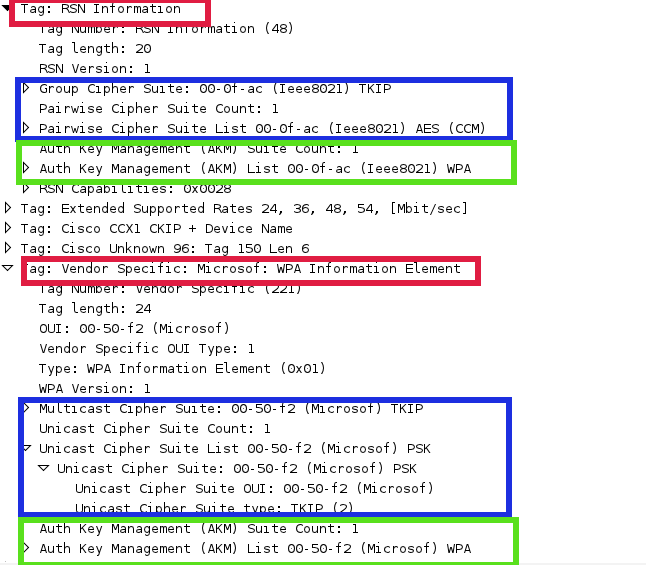 b.      STA selects one of authentication methods and cipher suites advertised by AP. In this case WPA2 with AES was selected, that can be seen in RSN IE parameters. 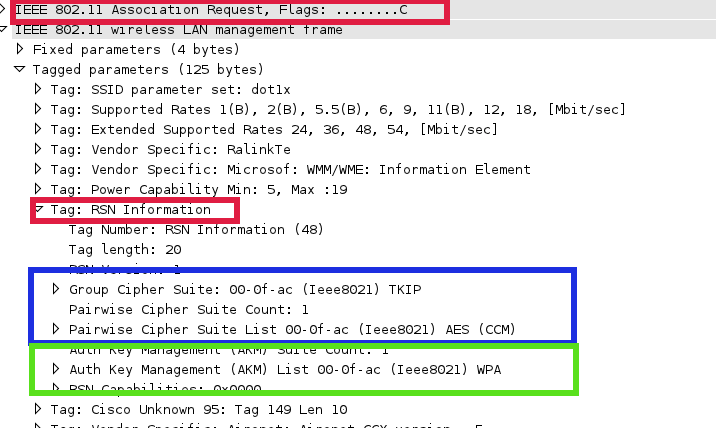 c.       After successful dot11 association dot1x authentication takes place, during this process we can see what EAP method is used by STA for authentication and certificate(s) exchange information between supplicant and AAA server.

d.      After successful dot1x authentication PMK is trasmited to AP in “Access-Accept” message from AAA server and the same PMK is derived on the client, next 4-way handshake takes place and PTK and GTK establishment.

Difference for this type of authentication compared to the previous one is that client provides its certificate in “Client Hello” message and mutual authentication is performed between client and AAA server based on certificates.

EAP exchange between STA and WLC: 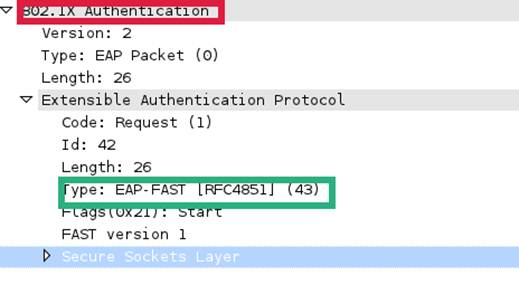 After TLS tunnel is established inner authentication method (phase 2) starts inside encrypted tunnel. On successful authentication PMK is send in “Access-Accept” message to AP from AAA server, the same key is derived based on dot1x exchange on STA. This key (PMK) is used to calculate PTK during 4-way handshake that will be used to secure communication between STA and AP.

What costing tool was used to capture WPA2-Enterprise?

I'm not sure what you mean by costing tool.  Are you talking about what sniffer was used to capture the frames?  These frames were captured using an AP in sniffer mode, and being viewed in wireshark.

Apologies. Yes, that was what I was talking about. Thanks for that.

In WPA-PSK(TKIP) 6c, the GTK is created only if it is required. If a GTK already exists, then the same is supplied. Also the GTK is ecrypted using the PTK and sent.