How do YOU and your teams use messaging in Webex? Let us know for a chance to win some Webex swag!
Turn on suggestions
Auto-suggest helps you quickly narrow down your search results by suggesting possible matches as you type.
Showing results for
Search instead for
Did you mean:
Start a conversation
Options
939
Views
0
Helpful
1
Replies

After upgrading 7841 to 11.7 firmware the CiscoIPPhoneExecute command is failing

I used that basic CiscoIPPhoneExecute command since years and it work on all firmware versions on this 7841 device, only the FW version 11.7 broken that function. We also tested the firmware sip78xx.11-7-1ES-11. 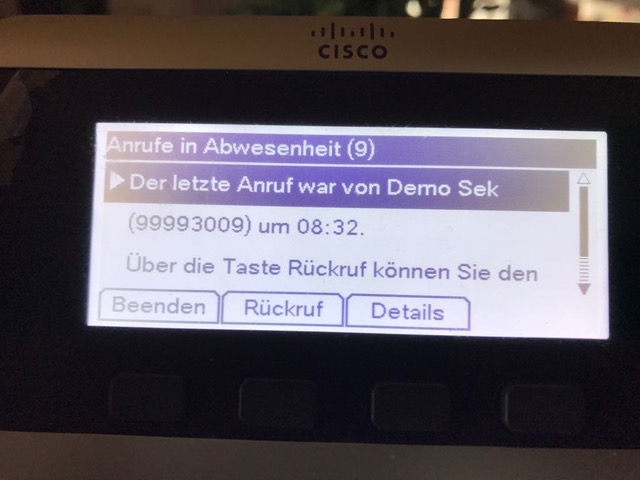 On the Service Screen we have a key „Rückruf“ which call backs a person. When you press that key it makes a call to an webserver which sends the following IPPhoneExecute command back to the Cisco Phone.

The phone ignores the command and we tried other CiscoIPPhoneExecute commands but these are not working. On older firmware versions we have no problems. On the 88xx Phones with the 11.7 firmware it works without problems. Only the 78xx is affected.

Have any an idea for an workaround or have similar problems?

Can you check in the CUCM admin phone configuration settings under 'Product Specific Device Configuration' that 'Web Access' is enabled?  It appears this defaults to 'false', and the firmware upgrade may have reset it...