Engaging the Education Community with DevNet at Cisco Live Europe 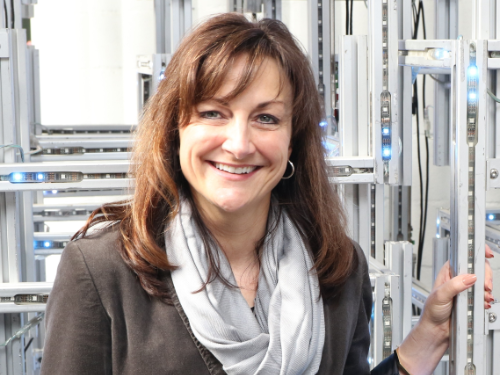 Cisco Live Europe took place on January 29 through February 2 in Barcelona, Spain this year, and it proved to be another incredible event. The DevNet Zone was a great space buzzing with thousands of people coming through our area to attend over 150 sessions. Participants took part in these seminars across 3 workshop areas, 2 classrooms, and the DevNet Theater. Also included in the DevNet Zone were demo pods, challenges, learning labs, and an IoT connected city slot car track. The Cube conducted and streamed live interviews in a dedicated space to share an industry view on the tech trends coming out of the event. Also returning to the DevNet Zone, and popular as always, was the IoT foosball table that kept people playing and learning throughout the duration of Cisco Live. This joined our three-part sandbox challenge of Network Programmability with NETCONF/YANG, Collaboration with API Calling and Voice, and IoT with Cisco IoX. These were also done as 5-minute mini-hacks and they proved to be a success with the DevNet community. 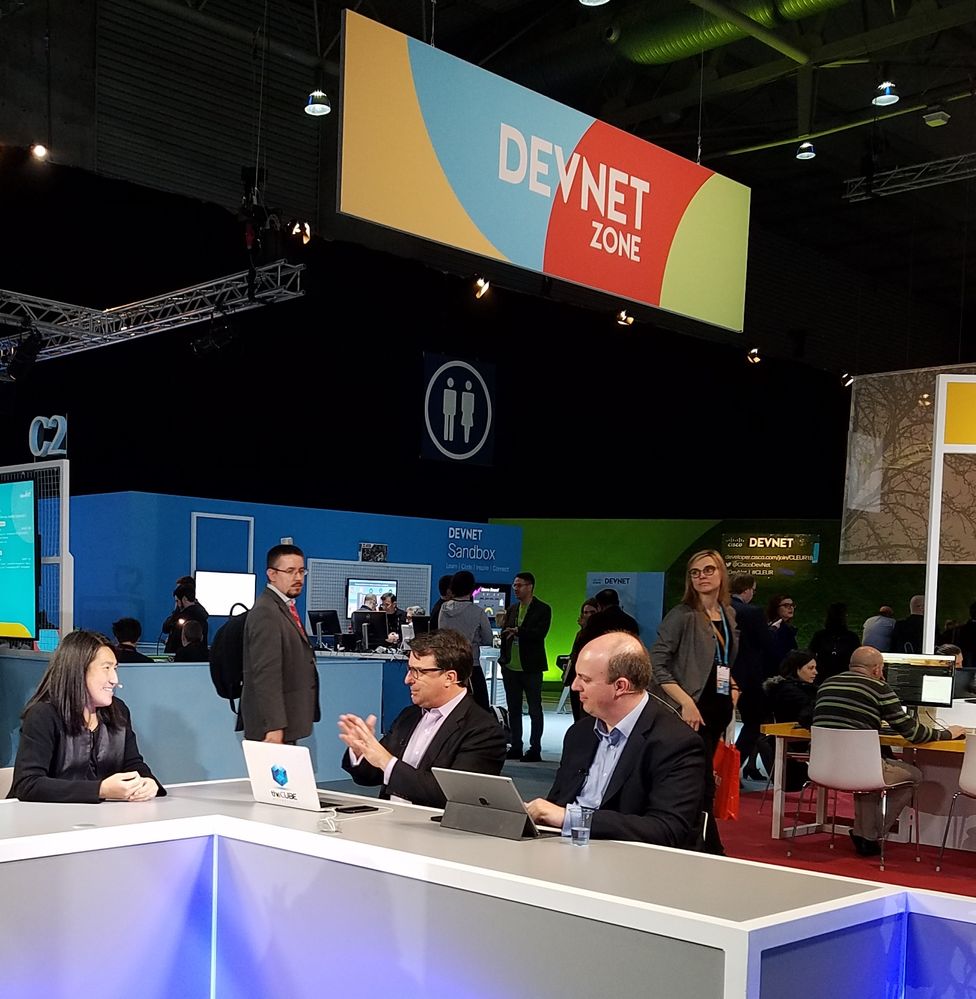 On Monday evening, DevNet hosted a Women in Tech reception following the Cisco Empowered Women's Network keynote sessions. Our next event was on Tuesday with a panel covering the topic of “Applying Design Thinking to Building Products”. The interactive discussion was held in the DevNet Theater with Susie Wee, Edwin Zhang, Michael Kopcsak, Hallgrim Sagain, Jason Cyr and Francesca Barrientos. This was further supported by a new Design Thinking workshop area featured for the first time in the DevNet Zone, and it proved to be quite popular for our loyal audience. 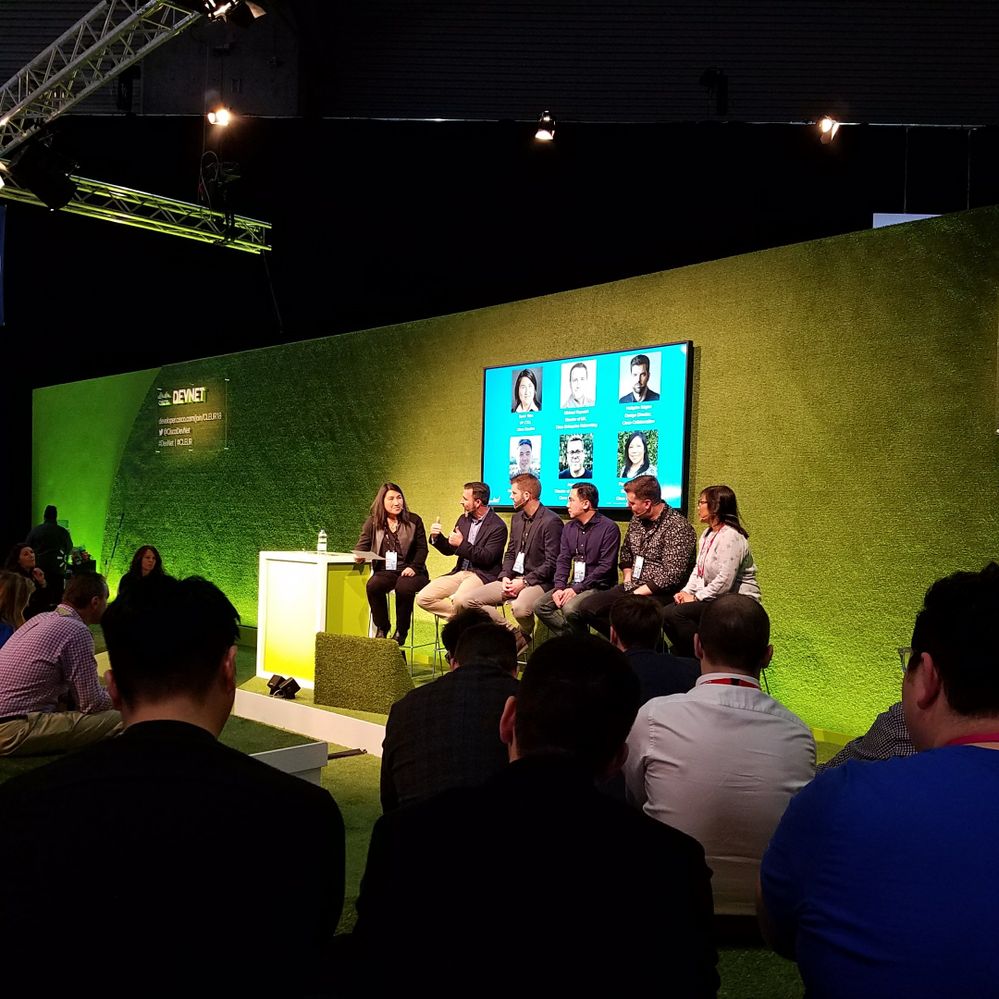 The highlight of the new additions to our space was the White Hat, Black Hat Security Challenge using real-world IoT hardware. The challenge started with participants acting as Black Hat hackers who tried to access the network by finding vulnerabilities in IoT devices and then the tables turned and they had to defend the network as the White Hat, heavily armed protector. Once both sides of the challenge were completed, participants won a special edition Cisco Live, DevNet Zone fedora as a prize. It was a great real-world scenario that allowed people to play roles they might not usually play in security, by creating a dual-sided face off in the safe environment of the DevNet Zone. It was a great learning experience and fun for all the participants. It was an engaging way to demonstrate the value Cisco brings by integrating threat intelligence into Next-Generation Firewalls, as well as the great service brought to the industry by the research performed by the Talos Group. 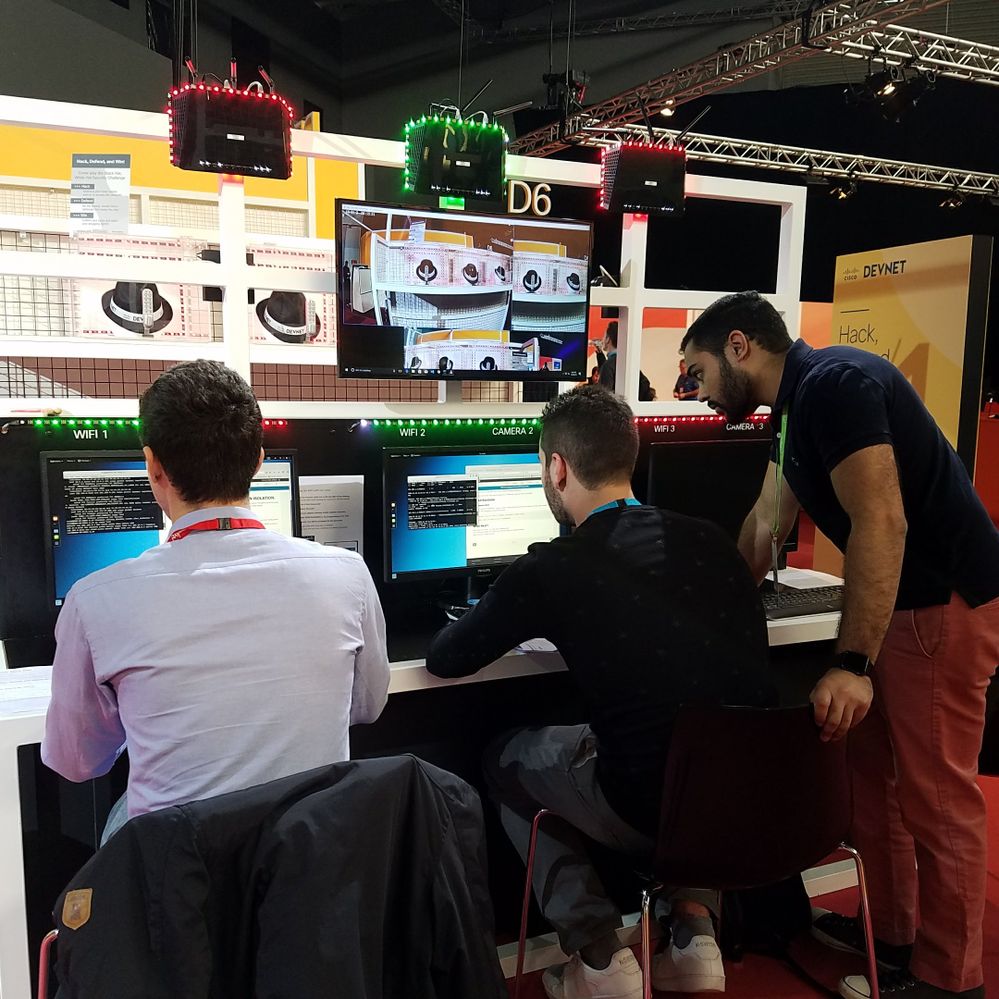 On Wednesday, Susie Wee presented the “Rise of the Network APIs” on stage in the World of Solutions. She discussed how modern applications are now integrating into digitized infrastructure and why it should be a focus for developers. Susie covered how applications are utilizing network APIs and NetDevOps to integrate in with programmable networks. Developers are passionate about utilizing network APIs in order to improve performance, security, integrate with digitized infrastructure, and deploy across public and private clouds. She also explained the flexibility brought by NetDevOps as a way to deploy Network as Code with CI/CD pipelines and DevOps practices. This enables the ability to quickly provision infrastructure, maintain system consistency and version, automate, test and observe network performance. Mandy Whaley joined on the stage to provide a NetDevOps demo using GitLab. She created a code branch, updated the configuration, tested it, and pushed the change to an automated pipeline to receive a notification. Next Susie welcomed Jerzy Foryciarz, Senior Product Manager from Google to discuss how Istio, an open source multi-cloud service mesh, has been integrated into the DevNet platform. Finally, she closed out the session sharing the newest developments within the DevNet team. She articulated how DevNet is providing the tools, resources, and training to leverage over 80 Cisco APIs to enable your network as a platform for innovation. 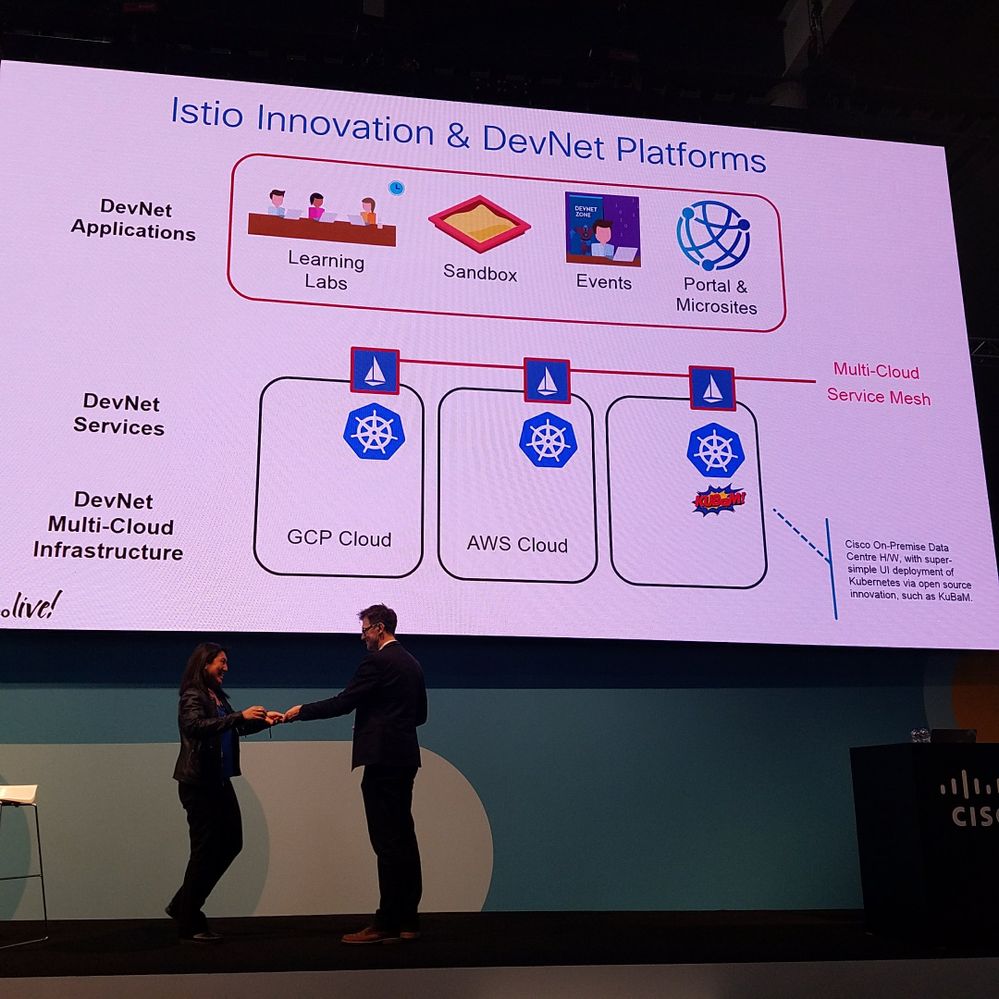 On Thursday, I gave a keynote at the Cisco Networking Academy Day along with Jose Manuel Petisco, General Manager of Cisco Spain; Giuseppe Cinque, Product Manager Emerging Technologies of Cisco Corporate Affairs; and Philippe Roggeband, Cybersecurity Business Development Manager of Cisco EMEAR. The students of the Networking Academy were excited to hear about all the technologies, learning, and career opportunities they could harness by becoming part of the DevNet community. After the keynotes, the students participated in an IoT hackathon utilizing Packet Tracer and Cisco Spark. Finally, the students came to the DevNet Zone along with their instructors to explore more about APIs and Network Programmability. 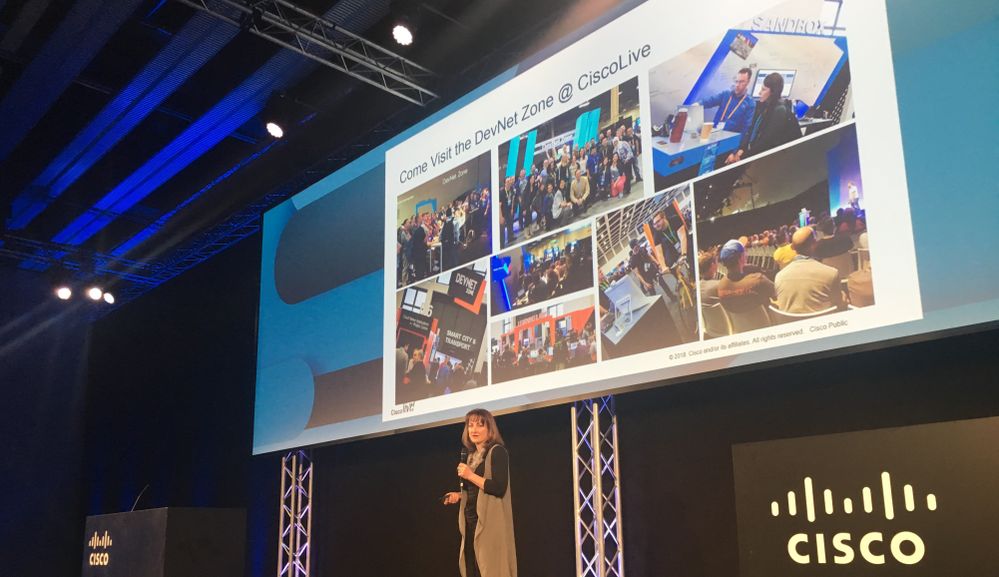 At the same time, one of the first DevNet and NetAcad co-developed workshops was run by Marc Khayat with a group of 25 Cisco Networking Academy instructors from EMEAR. They learned how to use Python, Postman, Swagger, APIC-EM and the Path Trace API so they could take these learnings back to their students in the classroom. After they completed the workshop, the instructors joined us in the DevNet Zone Open House and were inspired by the Network Programmability, IoT, Security, Open Data and NetDevOps demos.

Instructors seemed particularly interested in the IoT demo of a real-world use case utilizing data to manage IoT connected devices. The demo featured a dump truck with a IoT connected scale that measured how much weight was loaded in the truck. The scale was connected to a Raspberry Pi that was sending data to an IoT router. The IoT router had an application on it that was listening for critical events. When the truck was carrying too much weight in it, a Spark message would be triggered and sent to a Spark room with a group of people monitoring the use of the truck. 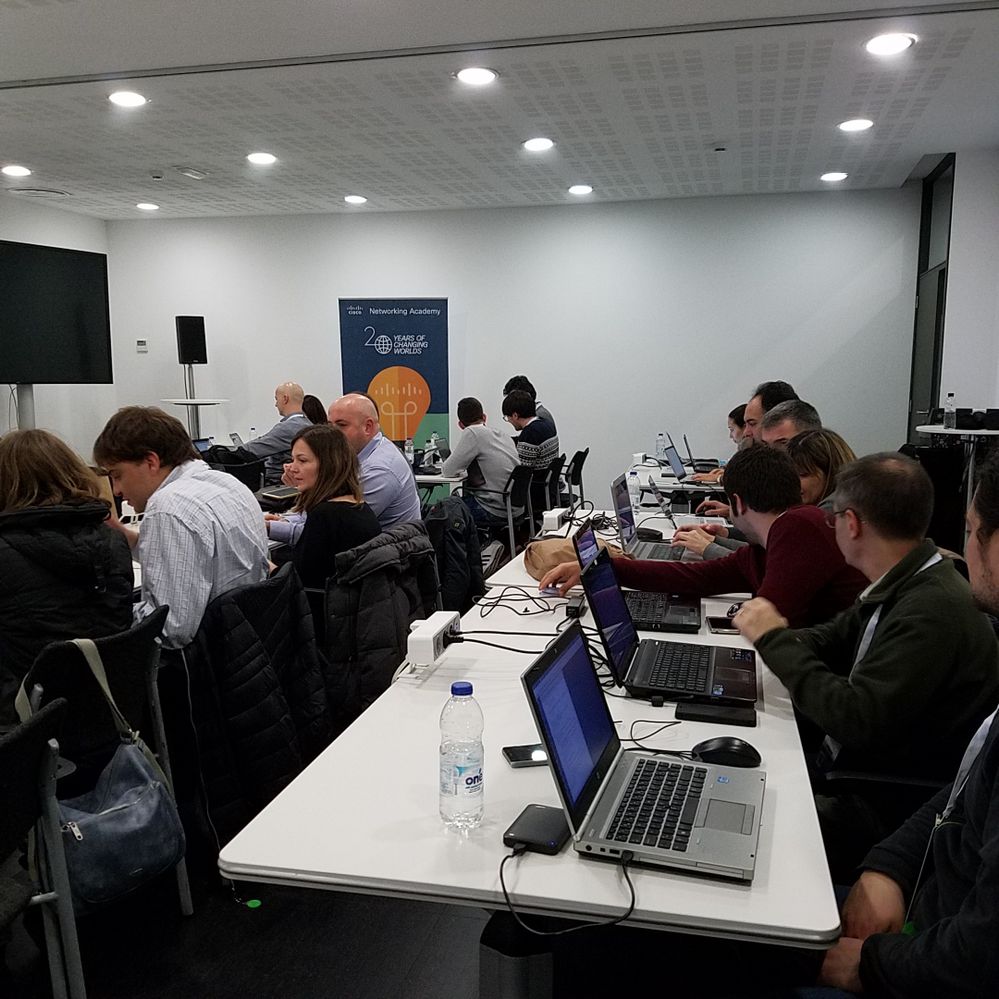 Also on Thursday in the DevNet Zone, we had a European DevNet Pros Panel moderated by Steve Sfartz. We ended the day by breaking down some of the demo spaces and challenge areas. Everyone had a good time at the customer appreciation event and then headed off to the beautiful city of Barcelona to explore some more.

As for me, on Friday I boarded a plane, but the DevNet Zone kept rolling with additional workshops and learning labs until the close of Cisco Live. It was a great event and we all enjoyed both Cisco Live and took in a bit of the culture and sights of beautiful Barcelona in between. Until next year, it is so long for Cisco Live Europe, but you can always join the DevNet community, do self-paced learning with our learning tracks, and take part in the Network Programmability video series to learn more.

Latest Contents
Can I test vmm domain integration on the cisco https://sandb...
Created by chemudupaty on 11-30-2021 01:18 PM
0
0
0
0
Can I test vmm domain integration on the cisco sandbox @ https://sandboxapicdc.com? I don't see the option for vmware credentials provided. let me know if this feature is available.
NSO reservable sandbox
Created by nicklas.eriksson on 11-30-2021 07:08 AM
1
0
1
0
Hi, I'm doing some learning labs related to NSO. Any idea if or when the NSO reservable sandbox will be available again ? Else I need to find some optional way to do the hands-on excercises
Run into"Virtualized Intel VT-x/EPT is not supported on this...
Created by wgebe on 11-30-2021 02:09 AM
1
0
1
0
I Unfortunately, CML2 no longer works. At least I again encounter the message "Virtualized Intel VT-x/EPT is not supported on this platform". I had it running in its entirety last week by turning off hyper-v and WSL.
ACI simulator Down
Created by jason.grant.holt on 11-29-2021 10:27 AM
1
0
1
0
Hello,  I am trying the ACI 5.2 Always on simulator lab and am getting a 502 error when trying to access it with the given credentials. Connecting to the ACI Server:This ACI Sandbox Lab contains a shared ACI Server Instance.The server can b... view more
AnyConnect credentials
Created by hisstory1970 on 11-28-2021 05:32 PM
0
0
0
0
Hello,Trying to utilize the Cisco Meraki Enterprise sandbox.  I get the email about the system creating the reservation but I never receive an email how with credentials to log into the AnyConnect VPN.
Ask a Question
Create
+ Discussion
+ Blog
+ Document
+ Idea
+ Project Story
Find more resources
Discussions
Documents
Events
Ideas
Project Gallery
New Community Member Guide
Related support document topics