Welcome to the new Cisco Community. LEARN MORE about the updates and what is coming.
Turn on suggestions
Auto-suggest helps you quickly narrow down your search results by suggesting possible matches as you type.
Showing results for
Search instead for
Did you mean:
Start a conversation
Options
1452
Views
5
Helpful
4
Replies

Guest session is not being terminated

1. Authenticate guest using CWA, there is no audit session-id attribute

Expected:
Redirect role from ISE since session is terminated
Reality:
Getting post auth role from ISE, Again after 120 seconds, when mab is triggered we get proper redirect role

Note: If we don't send radius acct start and stop packet, the behavior is as expected. We get redirect role after session expiry.
Please help me to understand, if I am doing something wrong.
Attached screenshots and guest.log

Everything looks good to me with your RADIUS log.

Beginner
In response to thomas
Options

Auth policy is set to 'Guest Flow', It is not 'Identity Group equals Guest EndPoints'. In the latter case, it will recognise until endpoint is purged right ? My use case is to force re-login of guest client after 30 minutes. How can I achieve that ?

You have not specified what type of Guest portal you are trying to use: Hotspot, Self-Registered, or Sponsored. That changes your options. You said "Authenticate guest using CWA..." so I will assume Self-Registered. 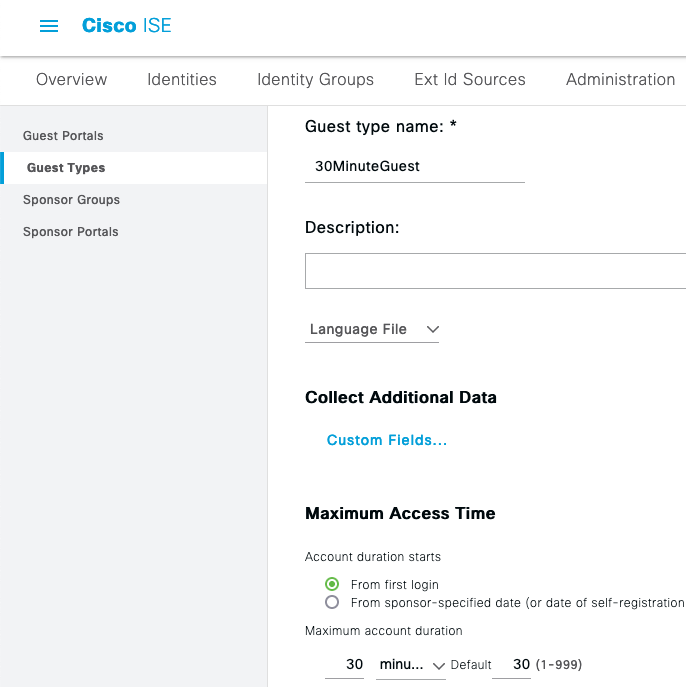 Then go to your Guest portal and assign your 30MinuteGuest Type:

Create a new Authorization Profile for your 30MinuteGuest . I am only showing the 1800 second timeout but you will need to apply whatever ACLs or segmentation you would want for your Guest to limit their access to your internal network if not using an anchor-controller guest architecture.

ISE has a built-in Wi-Fi_Guest_Access policy and Wi-Fi_Redirect_to_Guest_Login (both disabled by default) in the Default Policy Set. You may simply customize with your 30MinuteGuest Authorization Profile  :

> If mab is triggered after 2 minutes of session expiry, then getting redirect role properly.

In order to support 3rd-party NADs that do not support CoA reauth, ISE uses this timer to determine whether to continue with the sessions.