It’s 6 a.m. on a Saturday. Filled with excitement and anticipation, I watched as my hot air balloon, the last one in the bunch, inflated. Around me, one after another, balloons started to float effortlessly off the ground into the air. The Napa Valley’s sun glittered in the distant as my balloon finally took off. At 1,050 feet, some fogs rolled by, then I saw it: a shadow of my balloon in the fog encircled by a rainbow – see the picture above. I quickly pulled out my iPhone 6, snapped a panorama, and posted it on Facebook. It was the most mesmerizing experience ever, not just because of the experience itself, but also because I can share it with my families and friends via 4G LTE. However, 4G LTE isn’t just for smartphones.

The world of things, a.k.a Internet of Things (#IoT), around us is connecting in ways beyond imagination. According to a November 2014 issue of the Harvard Business Review, “Smart, connected products are changing how value is created…(and) will affect the trajectory of the overall economy, giving rise to the next era of IT-driven productivity growth for companies, their customers, and the global economy.” For example, just-in-time inventory replenishment, powered by connected vending machines, enables one business to capitalize on OpEx savings and increase revenue per unit. Wireless monitoring allows an oil and gas company to quickly respond to pipeline issues in rugged, remote locations. Connected lightning empowers one smart city to reduce crime rate and improve its residents’ quality of life. Even one’s personal space, such as the home, is becoming more connected with the use of #WEMO products and smart devices integration (those coming to #CES, you must see the Connected Home demo). This Digital Transformation, powered by 4G LTE, brings about considerable improvements in the ways we work, live, and play.

For IT, such IoT connects the previously unconnected, creating new opportunities to deliver speed, scale, and value for Line of Businesses. Usually that is the case in most environments, except when it comes to unwired locations, i.e. remote or nomadic locations, rugged terrains that lack a wired internet infrastructure. How do you connect the unwired? The answer is 4G LTE.

One of the main benefits of 4G LTE is OpEx savings. As an alternative link, in place of MPLS or wired internet line, the reduction in costs could be at least three fold. A few proven use cases such as connected ATM machines, POS, and kiosks, have successfully leveraged 4G LTE.

Organizations that made the leap, as much as 50% used 4G LTE connection as the backup link. Some benefits of wireless connectivity are a) not prone to tampering and b) timely emergency connectivity during outages. In situation A, a wire line can be physically cut, when, in most locations, the primary and backup MPLS are co-located. As for situation B, natural disasters such as hurricane Sandy could take out a regional wired link for a period of time. In both situations, 4G LTE is an effective and true WAN backup.

I would caution those that quickly come to such conclusion. There is value harnessed by 4G LTE beyond CapEx and OpEx savings. Enterprises that only assess the present are blind sighted by the possibility and innovation 4G LTE could bring to its top line or add to its competitive differentiation. Businesses across verticals are harnessing 4G LTE to ride the Digital Transformation – see Figure 1. (Here is a collection of case studies across verticals for your perusal.) 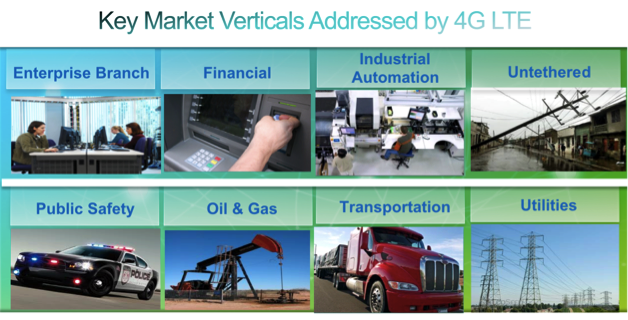 So, what drive organizations to adopt 4G LTE? Let’s examine the reasons Markets and Markets states in its 2014 research.

Determining the need for 4G LTE

To conclude whether your organization has a need now or will have a need in the future for 4G LTE, ask your Line of Business the following questions:

Almost 4 out of 5 businesses across verticals will answer ‘yes’ to at least one of three questions. Knowing the answer is half the battle. Being ready is an equally critical half. So, where should you begin?

On June 24th, from 10 a.m. to 11 a.m., Pacific Time, Alex Sahu, Cisco Product Manager, will present a live WebEx webinar on “Is Your Organization Ready for 4G LTE?” Here’s the agenda at-a-glance.

Until then, check out a @TechwiseTV video by Robb Boyd as an at-a-glance (click on image to play).

(Now, back to my hot air balloon adventure)

Until the day Google perfects Project Loon (#ProjectLoon), balloon-powered Internet in the stratosphere (also leveraging LTE), 4G LTE continues to power my work, my life, and my learning in the Earth’s troposphere. How have 4G LTE impacted your life? Share your stories with me on Twitter @annaduong using hashtag #4GLTE.

Latest Contents
How to Find SNMP String Being Used
Created by PolarPanda on 04-13-2021 01:43 PM
2
0
2
0
Hi there,          We have many SNMP strings over the years, but I didn't know any history of them. Is there anyway I can check which snmp being used or not? maybe in the logs? Then I can clean up the config. W... view more
Cisco cellular router / 5G support
Created by Omars on 04-13-2021 01:32 PM
1
0
1
0
Hello all, Could you tell me which routers models support 5G (in general) ? Also, is there a model in the ISR 1100 sereis supporting 5G ? Thank you !
Is it possible to scale down ACI-MSO nodes?
Created by wskinner1 on 04-13-2021 12:59 PM
0
0
0
0
We've been going through deployment requirements of a new ACI multi-site project and utilizing MSO in a cloud provider.  The requirements for MSO are NUTS though.8 vCPU + 48GB ram + 64 GB storage  x 3 nodes =~$15k per year in the cloud.I've run ... view more
Cloud OnRamp for multi-cloud
Created by username2 on 04-13-2021 12:44 PM
0
0
0
0
Hello, I have deployed a pair of CSR 8000v in AWS and Azure using Cloud On-ramp for multicloud, and that part was successful, the routers have established BGP, etc. to each cloud provider and to the controllers.  This was done mostly by using the def... view more
Catalyst 4500 L3 switch sending unknown LS types
Created by RonelPaul96063 on 04-13-2021 11:57 AM
0
0
0
0
Hello All, Hope everyone is fine and  staying safe. Currently facing some issue with the cisco devices.  Cisco routers with IOS versions:C2900 Software (C2900-UNIVERSALK9-M), Version 15.1(4)M4,Catalyst 4500 L3 Switch Software (cat... view more
Create ContentLogin to create content
Question or Discussion
Blog
Document
Project Story
Video
Related Content
Discussions
Blogs
Documents
Events
Videos
Project Gallery
Content for Community-Ad