Digital transformation is compounding the complexity for IT networks: the dependency of businesses on IT networks is increasing, there are more users and devices on the network than ever before and the demands on the networks to maintain business continuity are much higher than it used to be. As networks become critical to business operations, any network downtime can prove to be expensive. According to IHS, IT downtime costs North American business $700 billion annually. Network outages not only result in loss to business directly but also increase IT operating expenses. A network that is not inherently resilient and highly available is hard to manage and operate especially for critical deployments that do not have any appetite for downtime. 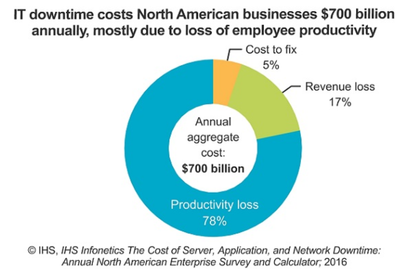 Cisco understands that business continuity is required for all its customers: large, mid-sized or small and the new Catalyst 9000 series switches from Cisco are built keeping network resiliency in mind. The award-winning Catalyst 9000 series switches bring in powerful innovations in both platform and software to ensure that you network is “ALWAYS ON”. Catalyst 9200 extends the same capabilities for smaller branch and mid-size networks.

The Catalyst 9000 series switches bring in redundancy in hardware to ensure that the network is immune to any hardware failures. The two most common reasons for hardware failure in an access switch across industry are power supply and fan failure. Power supply is susceptible to failure especially in regions that lack clean power and suffer from high power fluctuations. Likewise, fan failure may occur more frequently in an environment that is not controlled for dust or moisture. While it may not always be possible to remediate these environmental conditions, it is possible to add enough redundancy in the access switches to make sure they can withstand any such failures. Catalyst 9200 series switches come with two redundant power supplies and fans. The power supplies are also field replaceable so in case of a failure you can simply replace the power supply without having to replace the switch. In addition to that, Catalyst 9200 also offers the option to have field replaceable fans that can be easily replaced in case of failure. The system is designed to be able to run on a single fan in case of fan failure where the fan is fixed. This not only allows any failure in power supply or fans to be fixed within minutes with no interruption to the network but also reduces the overall TCO of your access network.

Power over Ethernet has been one of the most outstanding innovations in networking industry that allows devices to be powered up through an efficient PoE enabled port on the switch. While PoE power has all its advantages including optimization of power costs, any downtime of the network has a direct impact to the devices and clients that are powered through the access switches. All these devices would power recycle whenever the access switch that they are connected to goes through a reboot. Managing power recycle of a large number of devices in the network can be cumbersome. With the innovations in UADP ASIC and platform design, Catalyst 9200 series offer uninterrupted perpetual PoE power to the downstream devices even when the switch itself goes through a recycle as long as it is connected to a power source. This significantly shortens the recovery time and minimizes operational overhead of the network during a power recycle.

Latest Contents
NAT between same device IP addresses
Created by JussyJay on 01-22-2021 05:18 AM
0
0
0
0
Hi Guys/Gals, wondering if anyone can help? I need to NAT several IP's to a PC that have the same IP ranges (see diagram). I normally use Stratix switches which make life easier as they have separate command called l2nat but cisco switches do no... view more
Memory Usage Warning in Cisco FTD
Created by SecureMS10 on 01-22-2021 03:53 AM
2
0
2
0
Hello, I am getting the following Warning message for my FTDs.."The number of access list elements generated for the access control policy exceeds the limit for this platform. Please enable Object Group Search on the device." How do i resolve th... view more
DNAC - Role Based Access Control - Command Runner
Created by Eoin.Quinn on 01-22-2021 03:44 AM
1
0
1
0
Hi All Does anyone know what permissions control access to command runner & automated troubleshooting in DNAC?We're trying to setup a role so people can run the automated troubleshooting steps but they fail when you attempt to run them. Curr... view more
PKI Certificate Monitoring
Created by snarayanaraju on 01-22-2021 03:13 AM
1
5
1
5
Hello - What is the best industry practice to keep watching on the PKI Certificates in the Cisco Routers?In my setup we have 500+ Routers with PKI based IPSEC tunnels. We want to proactively monitor these Certificates and take action before the expiry.&nb... view more
ASA5525-X Problem with new ipsec tunnels after update to 9.8...
Created by Lucio87 on 01-22-2021 03:11 AM
2
0
2
0
Hi,I've been having major problems creating new tunnels since I upgraded my ASA5525-X from version 9.4 (4) 34 to version 9.8. (4) 22, all the tunnels I created before the upgrade continue to work fine.I give you an example of a tunnel that doesn't wo... view more
CreatePlease login to create content
Discussion
Blog
Document
Project Story
Video
Related Content
Discussions
Blogs
Documents
Events
Videos
Project Gallery
Content for Community-Ad
This widget could not be displayed.