Cisco has announced the availability of the latest IOS-XE release - IOS-XE Amsterdam 17.1. This release IOS-XE 17.1 is a Standard Maintenance Release which has a sustaining lifetime of 12 months with a Restricted build and a PSIRT build. IOS-XE 17.1.1 delivers new platforms along with multiple key Infra, Security, High Availability, Routing and MPLS features extending Intent Based Networking (IBN). 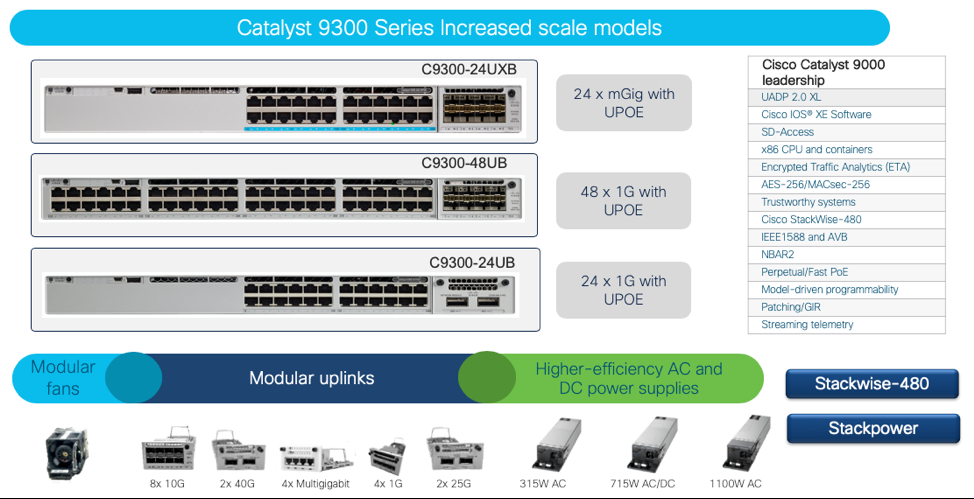 Cisco Catalyst Multigigabit Technology delivers speeds above 1Gbps and up to 10Gbps on existing cable infrastructure. This technology can also support Power over Ethernet (PoE, PoE+, UPOE, UPOE+) without a need to install new electrical circuits to power the Access points or any end point that would require PoE. With 802.11ac Wave 2 and Wi-Fi 6, the need for higher speed has become a reality and the Catalyst 9000 Series switches have been designed to meet these demanding requirements. With IOS-XE 16.12.2, below new mGig/UPOE SKU’s have been added to the 9300L switches.

Below are the 9300L mGig/UPOE models 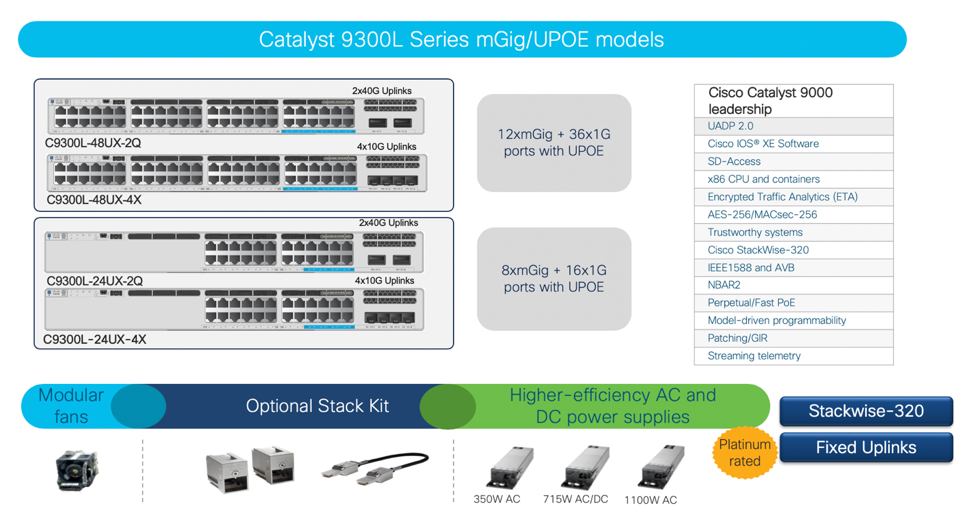 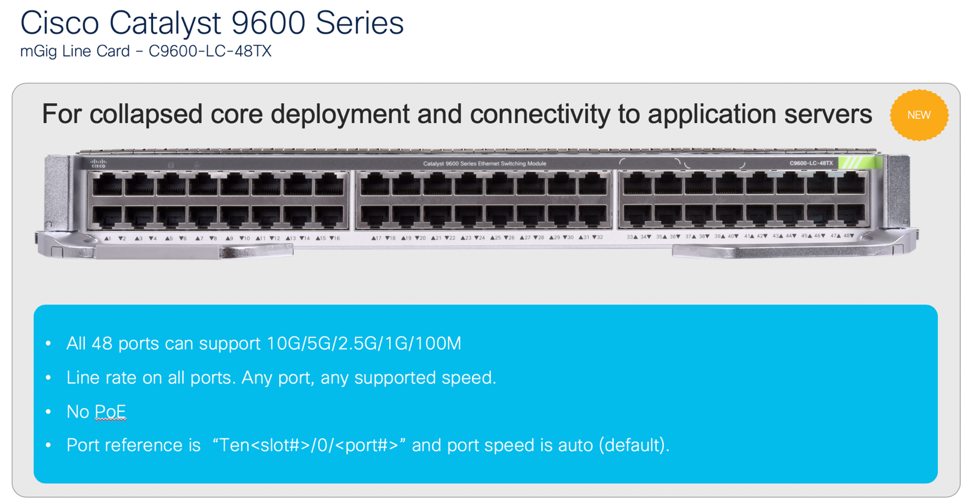 Catalyst 9000 series switches continues to add key features that help drive the Intent based Networking. In this release, multiple features have been delivered across High Availability, Security, Routing and Segmentation along with New Hardware introductions. 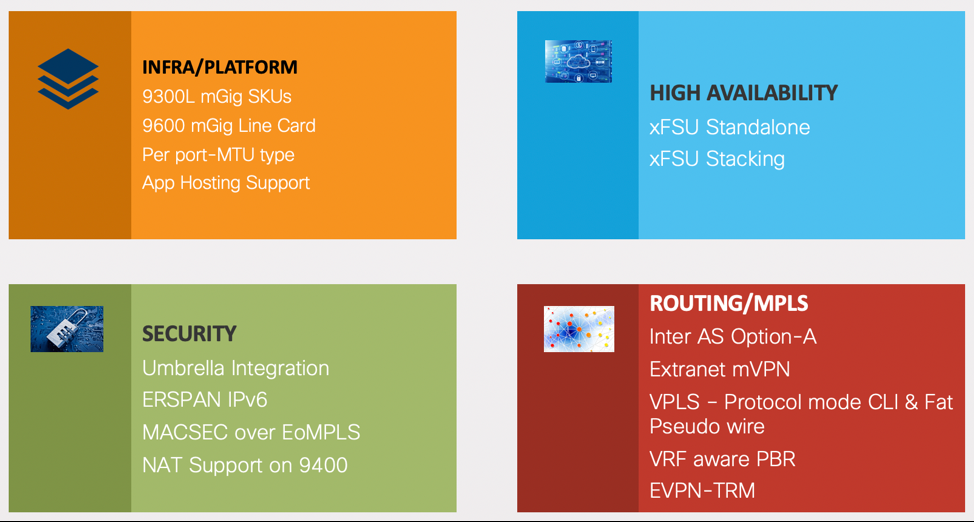 Starting IOS-XE 17.1.1 Catalyst 9300 series switches now support Extended Fast Software upgrade that helps reduces the traffic downtime to less than 30 seconds during an upgrade or a switch reload. This is accomplished by decoupling the control and data plane. In addition to supporting this on standalone switches, the feature has been extended to Stacking environments as well.

Security is the one of the key pillars of any network. With IOS-XE 17.1.1, Umbrella integration has been extended to Catalyst 9300 Series switches. You can now host Cisco Umbrella agent directly on the Catalyst 9200 and 9300 Series switches that enables easy customization of DNS filtering policies to prevent BYOD, guest or corporate users from accessing malicious or inappropriate websites. With IOS-XE 17.1.1, the feature also supports traffic splitting and encrypt the DNA Query. NAT has been extended to Catalyst 9400 Series switches starting IOS-XE 17.1.1 which enables additional security by hiding the internal address space and also helps with conserving the IP pools.

MACsec is currently supported on all Catalyst 9000 Family switches. IOS-XE 17.1.1 is taking this further to extend the support on a MPLS PE (Multi-Protocol Label Switching) that is either originating or terminating a pseudowire. Catalyst 9000 switch acting as a PE can now transparently carry macsec frames from CE (Customer Edge) to CE creating as secure connection over the MPLS backbone. IOS-XE 17.1.1 also introduces the capability to send Encapsulated Remote Switched Port Analyzer (ERSPAN) traffic to an IPv6 Destination natively in IPv6. With this feature, you can now use ERSPAN on a network that is completely migrated to IPv6.

Policy Based Routing (PBR) on Catalyst 9600 series switches is vrf aware with IOS-XE 17.1.1. With PBR being vrf aware, you can now steer traffic between vrf’s or from Global to vrf and vice-versa based on the policies. Catalyst 9000 Series already support extending MPLS across AS’es with Inter-AS Option B. Now, with IOS-XE 17.1.1, this can be accomplished using Inter-AS Option A as well, where multiple sub-interfaces can be used on ASBR to extend the connectivity between different AS’es. IOS-XE 17.1.1 also brings the support of Flow Aware Transport (FAT) to Virtual Private Lan Service (VPLS) providing the flexibility of load-balancing VPLS traffic on multiple core interfaces. Starting with IOS-XE 17.1.1, multiple receivers in multiple VRF’s will now be able to access a single stream from a single Source PE using mVPN Extranet Feature.

BGP-EVPN, an overlay technology, provides next generation segmentation along with extending L2 over L3 on existing infrastructure. With IOS-XE 17.1.1, Tenant Routed Multicast is supported extending L3 Multicast across the Edge switches.

The support for new optics and other specific features can be found at individual Release note pages below.

You can access the Cat9k GitHub Repository to browse through the examples on how you can use the Yang models or Ansible to automate various Network tasks. If you have an idea and a script that can automate the network, please do a git push to the repository!