I have written a number of blogs on Network Plug and Play (PnP) on APIC-EM and wanted to provide an update of the new improved PnP in DNA Center.

This new series covers the changes and enhancements made to PnP on DNA Center 1.2.   The PnP application was not officially exposed in DNA Center 1.1.x The main changes in 1.2 include:

A PnP solution has three main components (and one optional one): 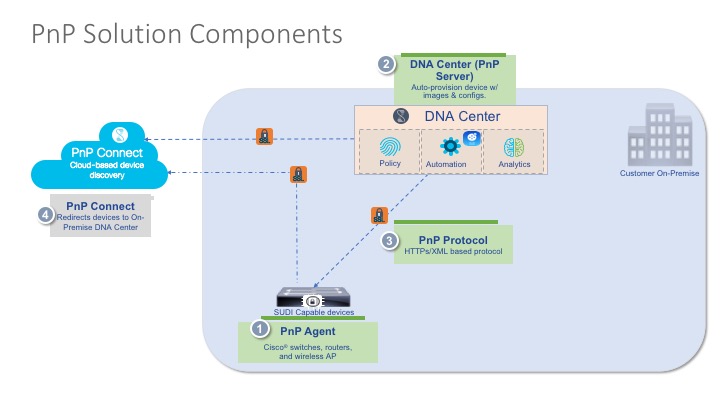 The first thing that needs to happen is for the device to get in contact with the controller. There are four mechanisms you can use to make this work:

At present PnP is not integrated into the provisioning workflow, this will be done in the future. There is a standalone PnP app in the tools section.

Getting Started – Creating a workflow

Open the app and the first big change is the definition of a workflow.  In this example, we define a simple workflow that uses a configuration template to provision a new switch.  There is also a default workflow.   Select workflows and “Add workflow” the default workflow can be edited.    Delete the image task (which will upgrade the IOS on the device) and then select a template for the configuration file. 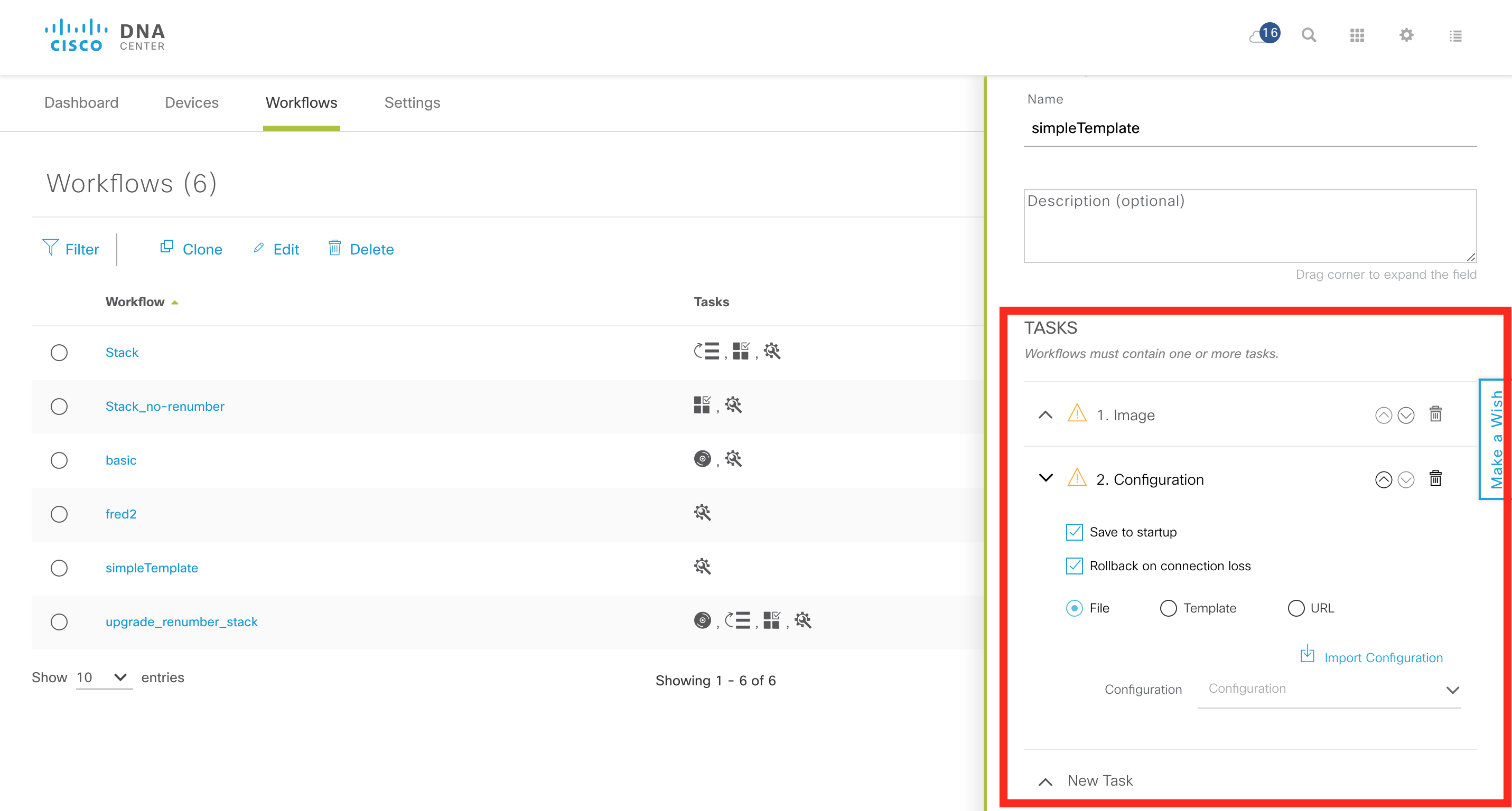 For simplicity we assume the template has already been created.   There will be another blog series on templates.  NOTE: It is still possible to upload a discrete configuration file per device (not template).   Templates have projects, so a template needs to be created first.   The simple workflow leaves a single step, which will deploy the template called “base config”. 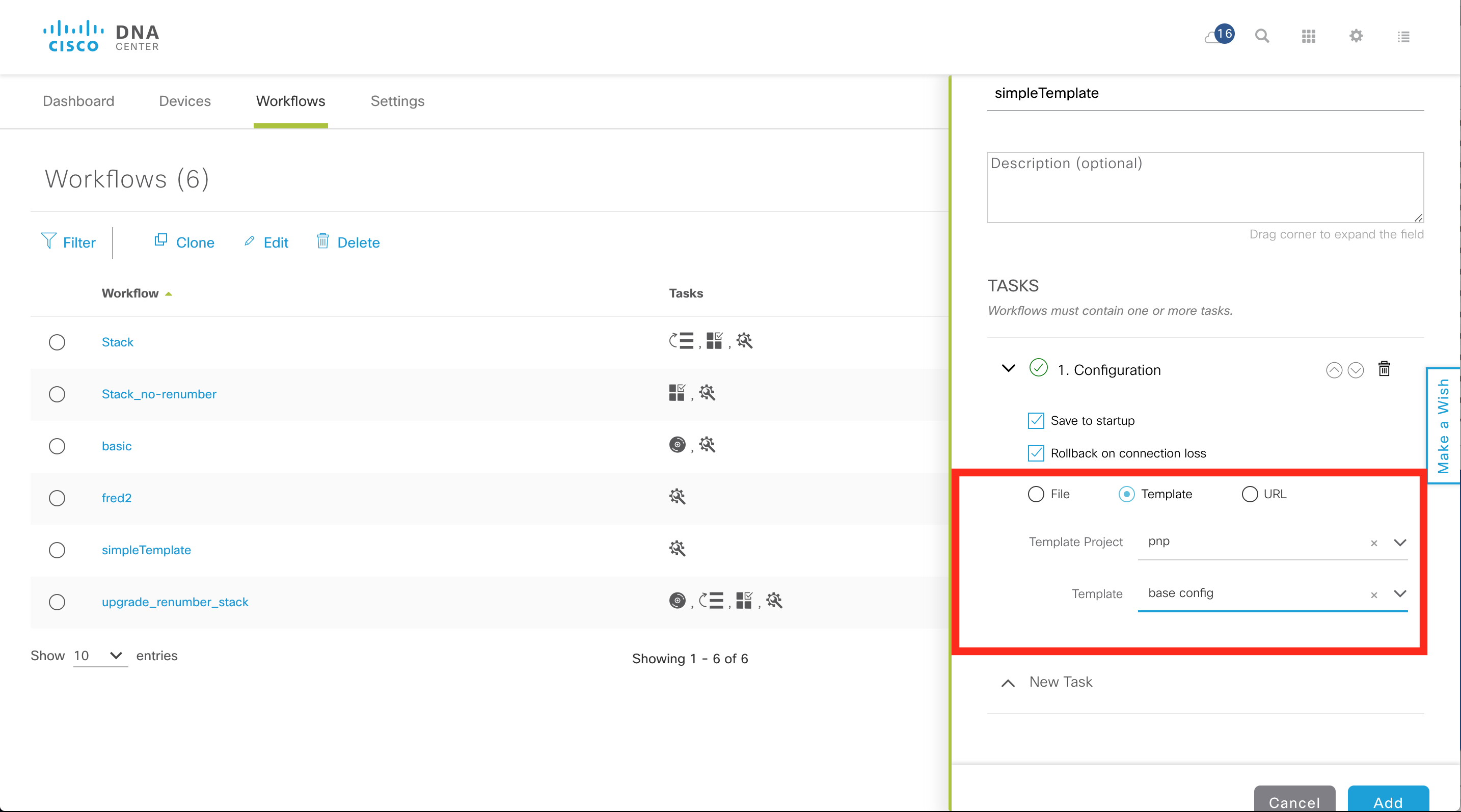 Unlike APIC-EM, there is no concept of project exposed.

There is still an unclaimed or pre-provisioned PnP flow.  The difference is that everything is now “claimed”.  To pre-provision a device,  add it to PnP, then “Add + claim” it.

When claiming the device, the values for the template variables need to be defined.   In this case the “base config” template requires a single variable called “hostname”.   This variable is set to “pnp-test1”.

This results in a PnP device rule created on DNA Center.   The rule was created by the user, the state is planned (which means the device has not initiated communication yet),  and there has been no contact.  It also specifies the workflow for onboarding “simpleTemplate”.

Once these steps are completed, the device is powered on.  It contacts DNA Center and the onboarding process begins.

The process has completed, the device will be moved to provisioned and added to the inventory.

Although the devices is added to the inventory, under the device provisioning page is appears as  “Not Provisioned”.  This is in reference to the Day-N provisioning which includes the site-settings, templates and policy provisioning.  This workflow will be further integrated in future.

There was still a bit of human activity in provisioning this device.  I needed to create the initial template file, add the device, claim the device and provide values for template variables.  Oh, and I needed to plug the device in and power it on.  All except the last step I could automate.   Imagine you had 1600 switches you wanted to pre-provision with a template!  The next blog will show how the REST  API can automate this process.

In the meantime, if you would like to learn more about this, you could visit Cisco Devnet. DevNet has further explanations about this. Also, we have a Github repository  where you can get examples related to PnP.

Hi Adam. We are going to use the plug-and-play module for APIC EM for thousand of routers.

When using a hostname with 16 characters or more, the provisioned device goes into ERROR stage with the output below:

There are also some errors with IP SLA's.

Are there any way to make APIC-EM ignore some or all syntax checks, so it goes to Provisioned state?

In short there is no way to turn of syntax checking as we wanted to make sure the configuration is successful.

We should fix this in IOS, which will not help you in the short term.

There is a way I can think to workaround it, that involves an EEM script to configure the hostname and remove itself.

I have documented these before in other blogs.

The EEM script runs 30sec after the configuration is saved (and PnP is happy), it then configures the hostname (ignoring the message) and saves the new config, as well as removing itself.

I call it a self destructing EEM script.

In your case, if the script is not going to impact connectivity, you should be able to get it to fire in 30secs

Thanks for the prompt reply.
I'll add the hostname issue to my already configured self destructing EEM script

I also have issues with uploading IR IOS to the APIC-EM server. i.e "ir800-universalk9-mz.SPA.156-3.M". Do you know about any workarounds here?

Cisco Employee
The filename should end in .bin?

Correct. The IR series do bundle install and upgrade hypervisor as well.
Things is getting close to put the APIC-EM into production.

Do you know if SAN supports wildcards (domain changed by me)?
From cert:
DNS Name=*.isp.com

We run an MPLS network in which basic BGP and physical interface configurations have to be present before any connectivity can be established. We're trying t use DNAC PnP to just ship routers and switches directly to our new sites without having to receive them in-house first, unbox them, configure them, then incur additional shipping costs and more lost time to send the equipment to its destination. My thought process was to send a router to its site, put just a bare bones config on the router through our cellular Out-Of-Band solution, throw a very basic config on the router just to get BGP up and establish connectivity, then allow DNA Center to find the router, push the image and configuration template out via Plug and Play. I'm running into issues, and I think it's due to the fact that when Plug and Play sees any configuration saved in NVRAM, it foregoes the PnP discovery process. Is this correct? And if this is correct, is there anyway to manually restart the PnP discovery process from the CLI? Your help is much appreciated.

Cisco Employee
You put the “barebones” config on a USB drive and boot from that. The router will read in the config and then still PnP. You need to manually configure the pnp-profile as part of the config.

Remember with PnP, the router needs to find DNAC, not the other way around.

If you did not want to use a USB, you could save the file to flash, and then do a copy save-config run. That requires one manual step on site.

You could also look at PnP Cloud redirect, but this also requires some configuration to be done as the device needs an IP address, and routes (via BGP in your case).

Latest Contents
Permission denied - Ansible Hands On NXOS Sandbox
Created by EvanC on 07-26-2021 07:28 PM
0
0
0
0
I'm playing with the Ansible Hands On lab with NXOS Sandbox On step 3, I understand the purpose is to create a playbook to copy a customized hosts file to replace the default hosts files stored in /etc/hosts However, when I run the playbook... view more
IOS XE command option json
Created by Salongo on 07-22-2021 05:39 PM
2
0
2
0
Hi Community, I was wondering if anyone has faced this issue. The below command option is not working for me: sh ip int br | json   OR sh ip int br | json-pretty. Version: IOS XE 16.12.5. Re/Saleh Re/Sal
IOS-XE Streaming Telemetry incomplete
Created by lukeberkheiser on 07-22-2021 08:41 AM
0
0
0
0
Hello,I'm trying to setup monitoring of IOS-XE devices using Streaming Telemetry to replace SNMP. I'm able to get some data through my Telegraf-Prometheus-Grafana setup, but it looks like I'm not getting all the entries in the YANG tree. My devices are ru... view more
ietf-interface and CIsco-IOS-XE-native which one is suitab...
Created by Jacky_hotel_california on 07-21-2021 06:59 PM
3
0
3
0
Hello Boss, Please kindly see the question below.    Question is here,  I can get the data with filter1 but I am not able to get anything with filter2.I'd like to know what's the scenario we use  ietf-interface and what's the... view more
Ping action with XE Yang?
Created by Xiang Zuo on 07-16-2021 07:54 PM
2
0
2
0
Greetings,   I was able to find the Cisco-IOS-XR-ping-act model to automate the Ping actions. But is there anything similar for the XE platforms? I cannot find any. And if none exists, what is a common solution to that - to automate ping action on XE... view more
Create ContentLogin to create content
Question or Discussion
Blog
Document
Project Story
Video
Idea
Related Content
Discussions
Blogs
Documents
Events
Videos
Ideas
Project Gallery
Content for Community-Ad